Monday January 21: Five things the markets are talking about

It’s expected to be an interesting holiday-shortened week for capital markets. Last night we had Chinese Q4 GDP data, where the world’s second-largest economy grew +6.6% in 2018, the slowest annual pace in nearly 30-years.

There is also potential for more Sino-U.S trade developments, and perhaps new further twists on Brexit. U.K PM Theresa May’s is due to present to parliament today Plan B, however, many believe it’s likely to look very much like the first Brexit deal which was heavily rejected in parliament last week. Are Brexit negotiators are edging closer to a second referendum?

Euro equities and U.S stocks futures start their sessions on the back foot, while Asian markets posted modest gains as the market digested a mixed bag of Chinese headlines on the economy and trade. Last week, improved investor optimism for Sino-U.S trade talks saw global equities and U.S stock futures climb, however, reports that the two sides are making little progress on the key issue of intellectual property protection has some investors questioning their risk appetite.

On tap: PM Theresa May will explain her next steps on Brexit later today, while U.S earnings season remains in full swing.

In Japan, the Nikkei advanced to a one-month high overnight, tracking U.S futures gains that helped support cyclical stocks such as shippers, while a weaker yen supported exporters.

The Nikkei share average rose +0.3%, its highest close since Dec. 19, while the broader Topix rose +0.6%, with the lowest level of shares since last September.

Down-under, Aussie shares rallied for a fifth consecutive session overnight, led by banks and energy firms, despite concerns of a China economy slowdown. The S&P/ASX 200 index rose +0.2%, its best close since Nov. 12. The benchmark rallied +0.5% on Friday. In S. Korea, the Kospi ended flat as China’s strong industrial output (+5.7% vs. +5.3%) limited losses from China posting its weakest economic growth in nearly 30-years. 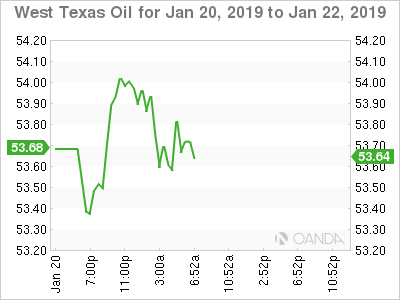 The combination of production cuts by OPEC+, especially the Saudis, and tightening sanctions on Iranian oil exports is bringing the market close to equilibrium.

OPEC+ indicated last week that they had cut oil output sharply in December 2018 before a new accord to limit supply took effect on Jan. 1. This would suggest that the main producers have made a strong start to avoid creating a supply glut in 2019. In its monthly report, OPEC’s oil output fell by -751K bpd in December to +31.58M bpd, the biggest month-on-month drop in 24-months.

Also, a surge in U.S crude output is undermining most of OPEC’s efforts – U.S output has increased by more than +2M bpd in the last 12-months to +11.9M bpd.

Note: OPEC has cut its forecast for daily demand this year to +30.83M bpd, down -910K bpd from last year’s average.

Ahead of the U.S open, gold prices are holding steady as expectations that the U.S Fed would pause its multi-year interest rate hike cycle were offset by improving risk appetite. Spot gold is up +0.1% at +$1,282.80 per ounce, while U.S gold futures were steady at +$1,282.10 an ounce. 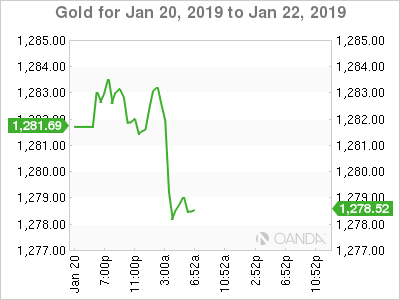 German Bund yields have edged lower in the Euro-session as signs of an economic slowdown in China, Washington’s partial Government shutdown and Brexit worries kept investors wary and strengthened the bid for safe assets such as Bunds.

Note: Signs of further cooling in China are fuelling market worries about risks to the world economy and are weighing on corporate profits.

Other euro zone yields are a tad flatter or a touch lower. Last week, that 10-year Bund yield recorded its biggest weekly rise since early November on growing hopes that Britain was heading towards a “soft Brexit.” 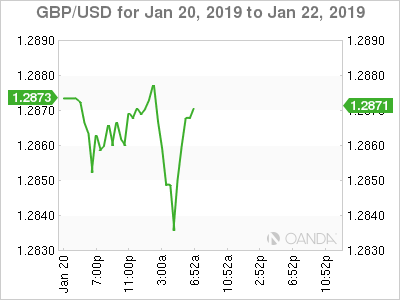 The USD is little changed in a quiet session with U.S markets closed for MLK Day. Expect market participants to be focusing on today’s Brexit outcomes as well as Sino-U.S trade talks.

GBP/USD (£1.2849) continues to move off its recent test of the psychological £1.30 handle as high uncertainty was likely to prevail in markets because the current situation regarding the UK’s plan to leave the EU did not appear to be any closer to a solution.

EUR/USD (€1.1378) remains very quiet, with many preferring to look ahead to Thursday’s ECB meeting for direction. The Draghi press conference will again be the markets primary focus, especially given the recent worries of continued weak economic data for the region.

USD/JPY (¥109.63) is holding just below the psychological ¥110 level with recent JPY currency weakness attributed to optimism on the US-China trade front. 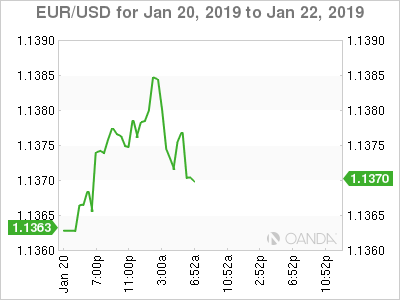 China data overnight announced that its official economic growth came in at +6.6% in 2018 – nearly the slowest pace in three-decades.

The disappointing headline print was not a surprise to many considering the ongoing trade dispute with the U.S, its largest trading partner.

Market expectations were looking for a lower headline print to 2017’s +6.8% pace and +6.6% topped many expectations.

There were a number of good areas – Industrial output (IP) grew +5.7% in December from a year earlier, beating expectations of +5.3% growth and outpacing November’s +5.4% growth.

Retail sales data rallied +8.2% in December on-year, in line with a forecast and up from November’s +8.1% gain. 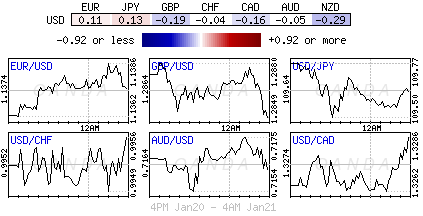