Key indicators out of Germany will be in focus this week as investors assess the health of the Eurozone’s industrial powerhouse for the month of December. Industrial orders will be watched first on Wednesday, followed by industrial production numbers on Thursday and trade figures on Friday, all due at 0700 GMT. After a dismal second half for industrial activity, 2018 is expected to have ended somewhat more positively. However, traders might treat any rebound with caution given recent downgrades to growth forecasts by both the government and the Bundesbank.

Germany’s economy has been decelerating since the start of 2018, with a variety of factors such as Brexit, trade tensions and bouts of political uncertainty on the continent weighing on business sentiment and investment. The slowdown has become much more persistent and severe than what most analysts and policymakers had anticipated, and Germany is now flirting with recession, threatening to derail a fragile Eurozone recovery.

Should there be are any encouraging components in this week’s data, they could provide some glimmer of hope for the markets that the worst is over and growth is steadying, even if an actual rebound may be some time away. Looking first at industrial orders, they are forecast to have increased by 0.3% month-on-month in December after tumbling by 1% in November. New manufacturing orders have been on a down path for much of the year and it’s been a similar trend for industrial production. 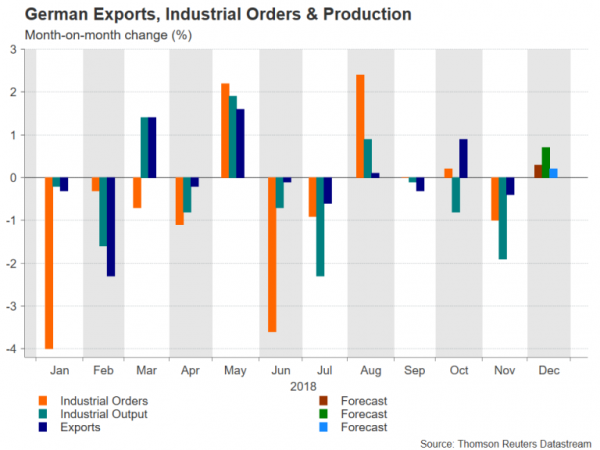 German industrial output fell for the third consecutive month in November, by 1.9% m/m. It is expected to have recovered slightly by 0.7% m/m in December. Exports, meanwhile, have performed similarly poorly since last summer as weakening overseas demand has hurt German manufacturers, which rely heavily on international trade. Exports are forecast to have risen by 0.2% m/m in December, reversing half of the prior month’s drop.

If the above releases surprise mostly to the upside, euro/dollar might be able to overcome immediate resistance at the 50% Fibonacci retracement level of the downleg from 1.1570 to 1.1286, which is around the 1.1430 level. A break above it would clear the way for the 61.8% Fibonacci at 1.1461, while higher up, the January top of 1.1515, which lies near the 78.6% Fibonacci, could be the next target for the bulls.

On the other hand, a negative set of numbers could drag euro/dollar down to the 38.2% Fibonacci at 1.1394. Failing this support, the pair would be at risk once again of crossing below the medium-term ascending trend line, which would then turn the focus on the 23.6% Fibonacci at 1.1353. A steeper sell-off would increase the prospect of breaching January’s 6-week low of 1.1286.

The latest IHS Markit PMI data suggest the manufacturing slump continued in January so any boost to the euro from unexpectedly strong numbers would likely be limited as they would not necessarily point to a turnaround in growth. The German government is also becoming gloomier. Last week, the country’s Economy Ministry sharply revised down Germany’s growth forecast for 2019 from 1.8% to just 1.0%. The Bundesbank looks set to follow suit. Its President, Jens Weidmann, speaking one day later said the economy “will probably grow well below the potential rate of 1.5 percent in 2019”. Only in December, the central bank had projected growth of 1.6%.