Employment data out of New Zealand will be watched on Thursday (Wednesday, 21:45 GMT) as investors try to gauge the Reserve Bank of New Zealand’s next move ahead of the central bank’s policy meeting the following week. Recent economic indicators from the country have been showing an improving trend, lessening the need for a rate cut. However, with a clouded outlook over world growth, any signs of renewed weakness in parts of the economy, such as the labour market, could revive speculation of an RBNZ rate cut.

New Zealand’s unemployment rate fell sharply in the third quarter to a 10-year low of 3.9%, defying expectations that it would stay unchanged at 4.5%. It is forecast to have ticked higher to 4.1% in the final three months of 2018, with jobs growth anticipated to have slowed to 0.3% quarter-on-quarter from 1.1% in the prior period. 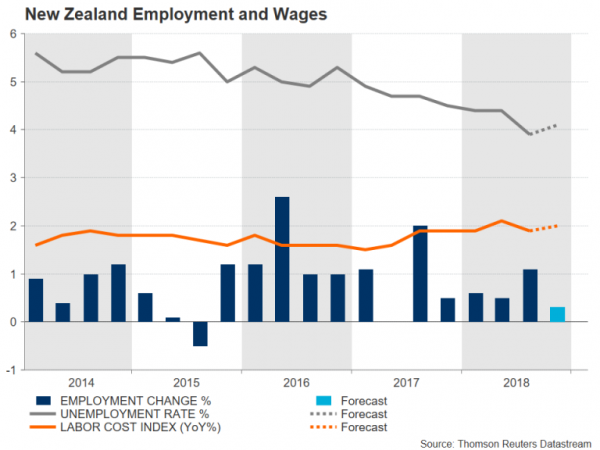 A small rise in the jobless rate is unlikely to alarm policymakers as a figure around 4% would still be historically consistent with a tight labour market. A bigger worry would be if wage growth was to moderate, as even with a decade-low unemployment rate, labour costs rose by just 1.9% year-on-year in the three months to September. Although they are forecast to have inched higher to 2.0% y/y in the fourth quarter, the RBNZ will not want to take a rate cut off the table until wage pressures have started to build up more substantially.

The RBNZ will next meet on February 13 and is widely expected to hold rates at 1.75% as it waits for growth and inflation to pick up some momentum. While, in addition to the strong jobs market, there have been a few other positives in the economy in recent months, such as rising dairy prices (dairy products are New Zealand’s biggest export earner) and inflation sticking close to the middle of the RBNZ’s 1-3% target band, business confidence remains weak and Q3 GDP growth came in at half the expected rate of 0.6% q/q.

The closely-watched ANZ business outlook index rose notably in December, but at -24.1, it remains deep in negative territory where it’s been stuck since October 2017. The RBNZ fears the subdued business confidence is a sign of softer growth to come and therefore will likely maintain its cautious outlook until there’s a convincing recovery in business sentiment.

The New Zealand dollar, which has rebounded to around the 0.69 level against the US dollar after slumping to a 32-month low of 0.6422 in October 2018, will probably struggle to advance much higher unless the RBNZ drops its easing bias. Another solid employment report on Thursday could prompt the central bank to signal a somewhat less dovish stance. However, with the deteriorating outlook for the global economy and inflation running in the lower half of the target band, it’s hard to see the RBNZ turning more optimistic just yet.

Any advances in the kiwi from a data beat will therefore probably be kept in check. Kiwi/dollar could re-challenge last week’s 2-month high of 0.6941 if there is a fresh upside push. Clearing this top would turn attention on the December peak of 0.6969 before the bulls aim for the June 2018 highs around 0.7050.

However, in the event that the jobs numbers disappoint, kiwi/dollar could seek support from the 50-day moving average, which currently stands at the 0.68 handle. A drop below this level could pull the pair towards the recent swing low of 0.6705, while steeper declines would bring the January trough of 0.6588 back within range.

NZDUSD Dwindles Ahead Of Ceiling Of Directionless Market