Friday February 22: Five things the markets are talking about

Global equities saw some modest gains overnight as investors await results from the Sino-U.S trade talks. Will we get some concrete news or perhaps an announcement of an extension of the March 1 deadline for implementing further U.S tariffs?

On the week, most major benchmarks are on course to close out a tad higher amid continuing hopes for a deal. Sovereign bond prices have seen a modest advance.

Elsewhere, EUR has seen small advance as the markets wait for ECB President speech this morning (10:30 am ET). The ‘big’ dollar has stabilised in the wake of the Fed minutes on Wednesday, but there is a lack of decisive direction as traders require something of substance for the dollar’s next leg move. Even sterling is confined despite the E.U chief Brexit negotiator indicating that he does not rule out a delay for Britain to leave the bloc (March 29).

On tap: Canadian retail sales are at 08:30 am ET, while President Trump is expected to meet China VP Liu He at 02:30 pm ET

1. Stocks mostly up on the week

In Japan, the Nikkei snapped four straight sessions of gains overnight as yesterday’s weak U.S data dampened investor sentiment, however, the selling was contained by more signs of progress in Sino-U.S trade talks. The Nikkei share average dropped -0.2%, while it posted a +2.5% gain for the week. The broader Topix declined -0.3%.

Down-under, Aussie stocks ended higher overnight as a signal from RBA that the next move in interest rates could be a hike supported financial stocks, which was able to offset declines in commodity-backed shares. The S&P/ASX 200 index rose +0.46% at the close of trade. On the week, it gained about +1.7%. In S. Korea, the Kospi closed flat as investors remained cautious in the outcome of the U.S-China trade talks. The index has risen +9.28% so far this year.

In China, stocks closed out the week posting its best weekly gains in three-years, amid hopes of a Sino-U.S. trade deal before the March 1 deadline. The blue-chip CSI300 index rose +2.3% overnight, while the Shanghai Composite Index ended up +1.9%. For the week, the CSI300 was up +5.4%, while SSEC gained +4.5%.

In Hong Kong it was a similar story with the Hang Seng index ending up +0.7%, while the China Enterprises Index gained +1.1% in Friday’s session. 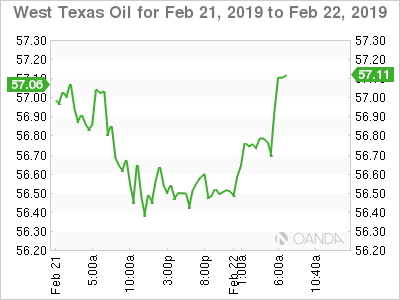 Oil prices are a tad firmer ahead of the U.S open, supported by OPEC’s ongoing supply cuts and hopes that U.S and China may soon end their trade dispute.

The supply curbs led by OPEC have helped crude prices rally more than +20% in 2019.

Note: OPEC member Nigeria signaled this week that it would limit output after its production climbed last month.

The main factor keeping oil prices from rising even further is soaring U.S output, which reached +12M bpd for the first-time last week according to the EIA yesterday. That means U.S. crude output has soared by almost +2.5M bpd since the start of 2018 – the U.S is the only country to breach these levels.

Note: OPEC last week lowered its forecast for growth in world oil demand this year to +1.24M bpd – however, there are some analysts who believe that number “could be weaker still.”

Gold prices are on course for a second straight weekly gain. Gold has inched a tad higher on U.S-China trade talks optimism, but lingering signs that the Fed could hike interest rates again this year has kept the yellow metal from penetrating its 10-month high hit earlier this week. Spot gold is +0.3% higher at +$1,326.56 per ounce, while U.S gold futures are up +0.1% at +$1,329.1 per ounce. 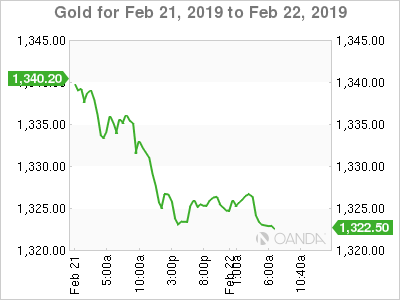 Italian bonds are underperforming other periphery debt product with yields +3 to +5 bps higher across much of the curve.

Some have suggested that it was premature to expect a Fitch downgrade of Italy’s credit rating today, but a deteriorating economic outlook had raised concerns about the ratings outlook. 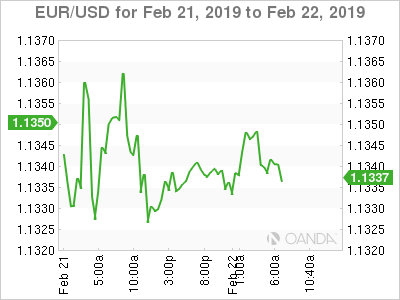 EUR/USD (€1.3337) has moved off away from its fortnight highs after this morning’s Feb German IFO survey (see below) suggested that the domestic economy was experiencing a downturn. Other data showed that Eurozone Jan CPI saw the second consecutive month where headline CPI y/y was below the ECB target of around +2.0%. ECB’s Draghi speaks at 10:30 am ET.

GBP/USD (£1.3014) is a tad lower, down -0.11%, but above the psychological £1.30 handle. EU officials have indicated there have been no breakthroughs in Brexit discussions in Brussels, with some expecting talks to continue next week. The EU said to be expecting U.K’s PM May to be forced to request a three-month delay if Parliament backed the Brexit deal, but it was not signed off until an EU summit on March 21-22. 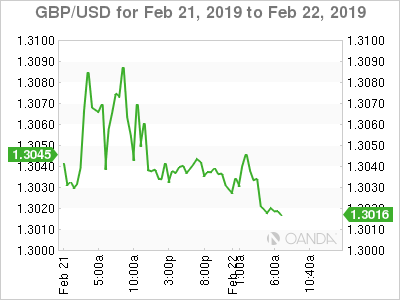 Data this morning showed that German business sentiment hit a four-year low this month. This would suggest that the economic troubles which started in H2 2018, are continuing into this year.

The Ifo Institute said that its business-climate index fell to 98.5 in February from a revised 99.3 points in January. Market expectations were looking for a print of 99.0 points.

“The German economy remains weak,” Ifo President Clemens Fuest said and
“have cut their business expectations for the next six-months, a development likely to spur growth concerns.”

Note: Germany just about sidestepped a technical recession in Q4 2019, and many economists have cut their growth expectations for this year in light of weaker global demand for capital goods.

In manufacturing, the business climate fell for the sixth consecutive month, the Ifo said. Thursdays German purchasing managers index showed that the contraction in German manufacturing has deepened this month. 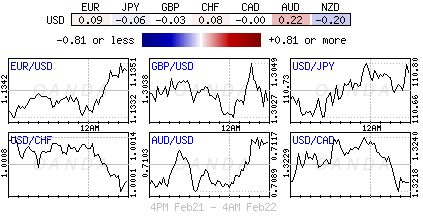