The US economy appears to be on solid footing after fourth quarter GDP cooled better than expected.  The fourth quarter reading for US GDP came in at 2.6%, better than the 2.2% forecast by analysts, but lower than the 3.4% growth seen in the third quarter.  The December effects from the government shutdown and trade war appear to have slightly brought down growth prospects and will lead many to believe the retail sales collapse in December will see a positive revision.

The US economy does not appear to be losing steam and this economic cycle is showing signs it is here to stay.  Fed rate cut expectations are likely to dwindle and we could see arguments return for the next move to be a rate hike.

The US dollar is slightly stronger against the Japanese yen and commodity currencies.  The yield on the 10-year Treasuries is higher by 2 basis points at 2.706%.  US equities are slightly lower in early trade. 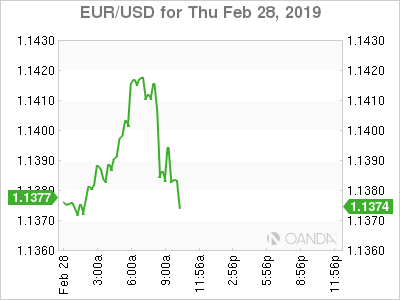 President Trump walked out on Kim Jong Un after it become apparent North Korea wanted all the sanctions lifted for the removal of their main nuclear facility in Yongbyon.  Kim was blindsided at the summit with evidence they created additional secret nuclear sites.  The market reaction was negative to risk appetite, but hardly anyone thought something concrete would come from this trip.

What was disconcerting was the way the US handled the trip to Vietnam.  Surprising North Korea with evidence that would likely derail their negotiation strategy was unlikely to make them cave and probably should have been provided in advance.  The visual of Trump walking out of the second summit with Kim will likely raise concerns that Trump may use the same move with President Xi when they attempt to end the US-China trade war.

China’s factory activity gauge declined further in February to a 3-year low.  The effects of the Lunar New Year holiday definitely weighed on the data, but many analysts expected the data could have been much worse as factory workers took off a full week.  The key to a rebound will remain on a resolution with the US-China trade war.  Delaying the tariff increase is not good enough to solidify Chinese economic growth and a framework agreement is needed next month. 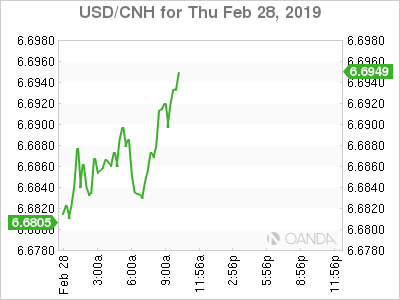 Crude prices remained stable after US economic growth did not cool as much as expected.  The key to oil remains the battle between President Trump and OPEC.  With crude imports to the US falling to a two-decade low and sanctions firmly in place on Iran and Venezuela, oil could remain supported until US production picks up in the warmer months. 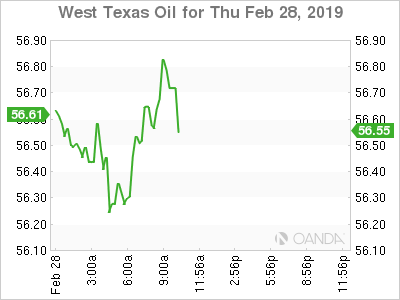 Gold lost of all its gains after the US delivered an impressive fourth quarter GDP reading.  The de-escalation in tensions between India and Pakistan also provided some pressure on the yellow metal earlier in the session, but by no means should lead one to believe this risk event is off the table.  Gold will likely be supported on slower economic readings from China and Europe and concerns the trade war will intensify before we see a deal.  Yesterday, US Trade Representative Lighthizer’s cautious comments on trade progress served as a reminder a deal is not necessarily imminent. 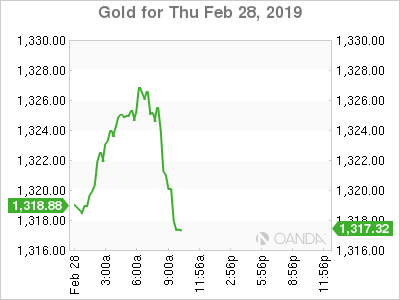