The US dollar is higher against major pairs on Thursday after the ADP added 253,000 jobs in May beating expectations of a 181,000 gain. The Institute for Supply Management (ISM) released the manufacturing index showing a slight gain in April overall holding steady and sending a positive signal on the US manufacturing sector. The dollar has struggled for most of the week until finally getting some traction from positive economic indicators. Traders will look to the U.S. non farm payrolls (NFP) released on Friday, June 2 at 8:30 am EDT for more guidance on the currency.

The Memorial Day holiday on Monday compress the data releases and Thursday in particular was busy. The positive ADP gains were balanced against a larger than expected weekly unemployment claims in the US. 248,000 individuals filed for unemployment insurance last week, analysts were anticipating 239,000. US crude oil inventories had a big weekly drawdown of 6.4 million barrels beating the forecast of 2.7 million. Gasoline inventories also fell by 2.9 million barrels and only distillates showed a small buildup of 400,000 barrels.

Federal speakers continue to support the idea of two or more interest rate hikes this year. On Thursday it was Fed Governor Jerome Powell to speak on behalf of further tightening and to throw some numbers on the final size of the central bank’s balance sheet ($2.5 – $3 trillion). The U.S. Federal Reserve is expected to raise interest rates after the meeting on June 14 ends. The market is pricing a 95.8 percent probability of the benchmark US rate to be in the 100 to 125 basis point range. With the June rate hike almost a foregone conclusion more data is needed to figure out if the Fed will hike another time before the end of the year. 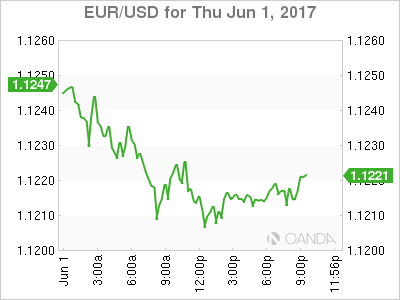 The EUR/USD lost 0.225 percent in the last 24 hours. The single pair is trading at 1.1208 after the strong ADP private payrolls report came in stronger than expected. The 248,000 gain is margin the fastest pace in private employment since 2014. The ADP has set higher expectations for the U.S. non farm payrolls (NFP) report to be published Friday. The US Jobs monthly report is the biggest indicator in the market. Solid fundamental data has helped the USD regain the momentum it has lost this year as Political turmoil has swamped the Trump Administration.

The dollar was an early beneficiary of the President’s plan to boost growth through tax reform and infrastructure spending, but those plans were derailed by prioritizing other policies that used up a lot of political capital from the White House, and still did not end up in anything concrete. The current Russian connection investigations could potentially further delay tax reform who is now not expected to be put to congress until August. The NAFTA negotiations will start around then as well and is uncertain what strategy will the Trump administration will employ, or if they will have enough time to craft one ahead of the trilateral negotiations.

Ending the week on a high with strong data will boost the USD which has suffered from political uncertainty. Political risk is on the rise on a global scale as the snap election in the UK and the parliamentary elections in France are entering their final stages. 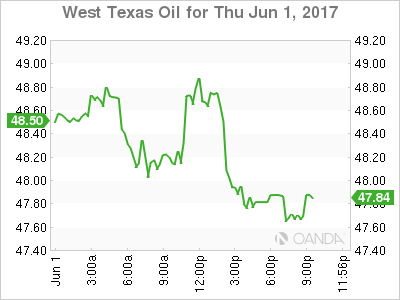 The price of oil gained 1.244 percent on Thursday. West Texas Intermediate is trading at $48.76 after the larger than expected drawdown of weekly US inventories. WTI came close to breaking above the $49 but remains close as the battle between the Organization of the Petroleum Exporting Countries (OPEC) with their production cut agreement and the US shale industry with ramping supplies have keep the price of energy within a range despite volatility.