The USD weakened initially, yet made some gains as the US employment report for March was released on Friday. The report showed a slower growth in average wages than expected, yet the overall picture of the US employment market remains tight as the NFP figure rose by a solid 196k. Analysts point out that the data released may not point towards a rate cut nor a rate hike for the Fed as they fail to provide any decisive incentives for either. Other headlines, seem to suggest that the US-Sino negotiations show some progress as the two sides wrapped up the latest round, yet a solution may require more time. AUD/USD dropped on Friday and during today’s Asian session, as it wasn’t able to clearly break above the 0.7121 (R1) resistance line and corrected lower. The pair may continue the sideways movement it has been maintaining for the past two weeks between the 0.7065 (S1) support line and the 0.7120 (R1) resistance line. Should the bulls take over, we could see the pair breaking the 0.7120 (R1) resistance line and aim for the 0.7190 (R2) resistance level. Should on the other hand the pair’s direction be dictated by the bears, we could see it breaking the 0.7065 (S1) support line and aim for the 0.7005 (S2) support barrier.

WTI prices continued to rise in a bulls market, reaching a 5 month during today’s Asian session. Analysts cite OPEC’s continuous supply cuts along with US sanctions on Venezuela and the Iran, as the main drivers behind the surge. On the demand side, optimism about the US-Sino negotiations seems to be also boosting prices. Energy consultants seem to be viewing prices as poised for further rises as excess inventories should start fading away and the market looks healthy. On the other hand a possible rise of Russian and US production levels could undermine oil prices. WTI prices rose and reached the level of 63.40 during today’s Asian session. As the upward trendline seems to be continuing to feed black gold’s price action, we could see them rising even higher. Should the commodity’s price action find fresh buying orders along its path, we could see it breaking the 63.80 (R1) resistance line and aim for the 65.3 (R2) resistance hurdle. Should the commodity come under the selling interest of the market, we could see its prices breaking the 62.00 (S1) support line and aim for the 60.85 (S2) support level.

In today’s European session we get from Germany the trade balance figure for February, while in the American session, we get Canada’s housing starts figure for March and the US factory orders growth rate for February.

As for the week ahead:

On Tuesday no major releases are expected, but Wednesday is expected to bear a heavy load as in the European session we get the UK GDP for March, as well as UK’s manufacturing output for February. The main release of Wednesday though could be the ECB’s interest rate decision and also the EU’s Brexit summit is expected to keep the markets on the edge of their seats. In the American session, we get the US CPI rates for March and the FOMC’s meeting minutes are to be released. On Thursday, we get China’s CPI rates for March, Germany’s and Eurozone’s final HICP for March and the US PPI rate for March. On Friday, we get China’s trade balance figure for March, Eurozone’s industrial production for February and from the US the preliminary U. Michigan Consumer Sentiment for April. 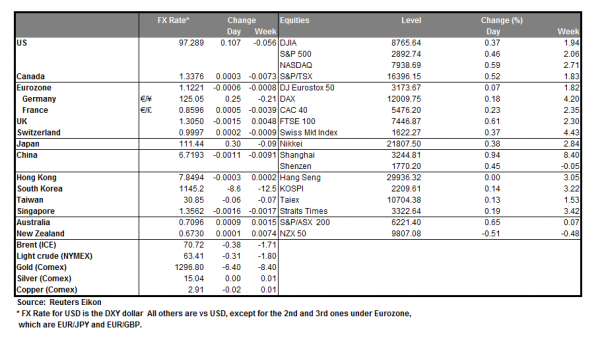