The Canadian dollar fell 0.5 percent after the Bank of Canada (BoC) kept its benchmark interest rate unchanged as expected, but went more dovish with its language. The central bank has all but removed the probability of a rate hike in 2019 with monetary policy to remain accommodative.

There was no mixed signals form the BoC it was all dovish, sending the loonie lower and fuelling forecasts of a rate cut, if the economy does not improve. The Bank of Canada (BoC) is forecasting a 1.2 percent GDP gain in 2019, a downgrade from the previous 1.7 percent estimate. 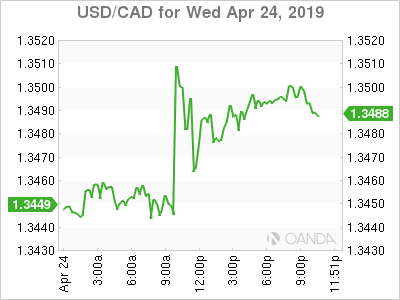 The drop in oil prices offered no support to the Canadian currency as a surprise 5.5 million barrel buildup in US crude inventories hit WTI prices to the downside.

The US dollar remained king of the currency world as German data sapped confidence in the euro and mixed economic data and central bank action showed that the US economy is still steady benefiting the greenback.

Energy prices were mixed as Brent continued to climb higher and is trading near $74.64 while West Texas Intermediate was hit by a larger than expected buildup as the Energy Information Administration (EIA) weekly crude inventories showed a 5.5 million barrel gain. 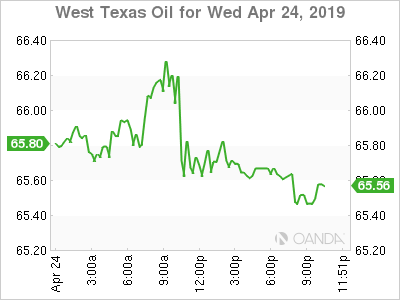 US sanctions have driven prices higher as the White House removed all waivers on Iranian crude, but the rise in American inventories will ease some of the pressure at the pump ahead of driving season. The OPEC+ has worked to stabilized prices by cutting production and seeking to absorb extra supply, but as US shale producers ramp up the battle for market share could hit another important chapter this summer.

The OPEC led by Saudi Arabia and major producers, the most vocal being Russia agreed to limit production but given the supply disruptions of late an extension to the agreement is not a foregone conclusion. 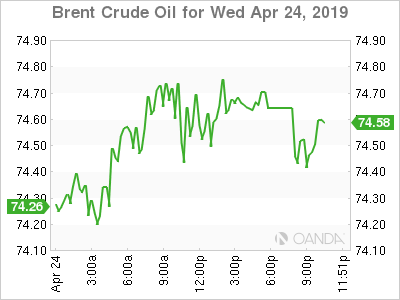 Sanctions against Iran and Venezuela added to Libyan conflict will continue to push prices higher, but only if the OPEC+ agree to keep their production cut program going. If producers do not agree on an extension if they deem the market to have reached a balance more supply could quickly find its way into the market.

Energy demand has been steady, but has not grown enough to be able to offset a sudden rise in supply from the OPEC+. Saudi Arabia is appealing to an extension, but Russia remains on the fence sending mixed signals. The outcome of the OPEC+ Ministerial meeting on June 26 will be the biggest factor in the energy market in 2019.

Gold prices rose on Wednesday as the really in equities lost momentum. Commodity prices rose after the dollar found little support from economic indicators, but looking ahead at US durable goods on Thursday and the highlight of the week being the first estimate of Q1 GDP on Friday. 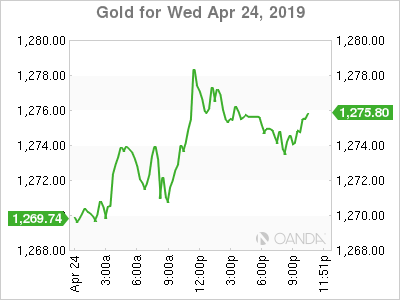 Growth concerns rose after the German Ifo Business Climate underperformed. German businesses are still mostly optimistic but the slight erosion of confidence put pressure on the euro as European growth is still a big question mark.

Gold was able to benefit from a slowdown on the equities rally and the dollar not having a strong fundamental push ahead of critical economic data later this week.