The main event for the dollar this week will be the US retail sales for April, due on Wednesday at 12:30 GMT. Amidst an escalating trade conflict, markets have fully priced in a Fed rate cut by December, yet the dollar has barely retreated. This highlights that the greenback is still the ‘only game in town’, with a rebound in European growth needed to change that.

Market bets for a Fed rate cut in 2019 were pared back after Chairman Powell struck a fairly confident tone at the May policy meeting, but that optimism didn’t last long. A quarter-point rate cut by December is now more than fully priced in, despite the US economy staying solid and the Fed reluctant to signal its next move will be a cut.

In the shadow of a trade war

The ‘straw that broke the camel’s back’ and made a rate cut a done deal for investors, was the latest escalation in US-China trade tensions. Markets (correctly) believe the Fed will look through any increase in inflation owed to tariffs, as that would be a one-off effect that doesn’t warrant a policy response – and will instead focus on supporting economic growth, which may take a serious hit if tensions escalate further. 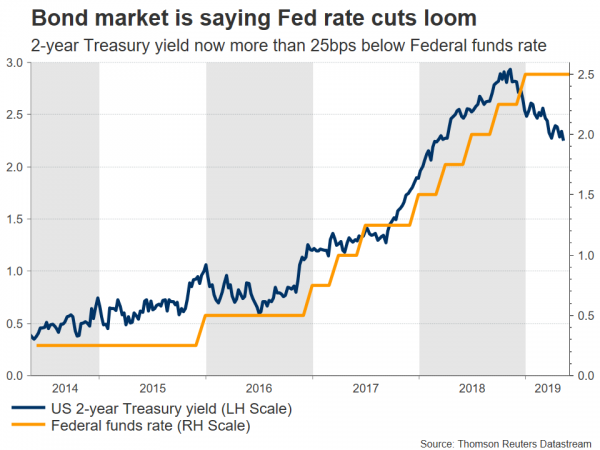 Retail sales set to cool, albeit from strong levels

Yet, this week’s data are expected to confirm that the US economy is still in good shape. In April, retail sales are projected to have risen by only 0.2% in monthly terms, but that follows a robust 1.6% surge in March. The core print, which excludes auto sales, is forecast at a much healthier 0.7%, from 1.2% previously.

But dollar holds strong as ‘there is no alternative’

Amid mounting bets for Fed cuts, one would have expected the greenback to weaken substantially, though that hasn’t transpired. Sure, the dollar index pulled back from its highs lately, but the tumble has been minor.

This resilience likely reflects a lack of interest for other major currencies. The euro isn’t appealing with the European economy so fragile, the pound is tormented by Brexit, and Japanese interest rates are so low the yen can’t gain traction without risk aversion. Trade uncertainty may have also helped keep the dollar afloat; recall that the US currency was the market’s favorite safe haven when tensions escalated last year.

Overall, even if Fed rate-cut expectations strengthen a little further, dollar strength is unlikely to abate materially until one of the narratives in the other major economies changes drastically – most importantly, the European growth story.

The greenback may also weaken if China goes for the ‘nuclear option’ in the trade dispute and starts selling its massive US bond holdings, but the situation is far from that point, suggesting the dollar may remain the ‘only game in town’ for a while longer.

Looking at the dollar index technically, support to declines may be found near 97.05, the May 13 low, with a downside break turning the focus to 96.75.

In case of advances, an initial barrier for the bulls may be the 97.70 zone, which was the high back in February, with an upside break opening the door for the 2-year high of 98.33.