Both China and US are seeing softer data points ahead of an escalation in tariffs.  US stocks opened sharply lower and the risk-off environment could get ugly if we see a strong break of yesterday’s lows.  Safe-haven currencies are stronger with the yen and franc posting the biggest gains.  Gold prices have modest gains after recapturing the $1,300 an ounce level.

Retail sales volatility continues as the April readings come in softer than expected.  The decline in vehicle sales was confirmed after a -0.2 percent reading showed the strong rebound in March may have been temporary and keeps the horrendous December number on the back of trader’s minds.  The US consumer outlook remains mixed as the labor market and wages appear robust, but vulnerable to the outcome of the trade war.

Empire State Factory survey had its best reading in six months, but markets may not care as much until we see a resolution with trade uncertainty.  Inventories declined which bolds well for demand being strong.  The Empire report was pretty positive across the board, but will likely take a back seat to the retail sales readings.

The April readings for US industrial production and factory output disappointed before the NY open.  Overall, the US data this morning has been soft and should provide added motivation to push forward in working a deal out with China. 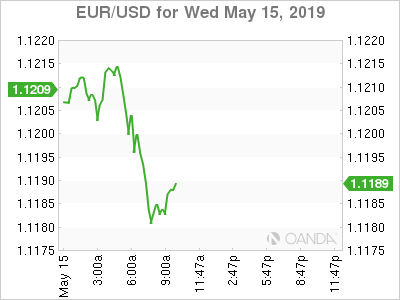 A slew of Chinese economic data showed a deceleration ahead of higher tariffs from the US.  Asian stocks however little harmed as expectations remain high more stimulus is on its way.  The dismal data also adds to the argument that China needs a trade deal more than ever and that fresh rate cuts will not be enough for sustained growth.

The industrial output reading for April climbed 5.4%, a miss of the 6.5% consensus and much lower than the strong 8.5% print in March.  Retail sales fell to the lowest level since 2003 and the closely watched manufacturing investment growth was the weakest reading since 2004.

Trumps tariff increase and threat for fresh ones should keep the highly motivated Chinese to keep trade talks progressing to an eventual deal. 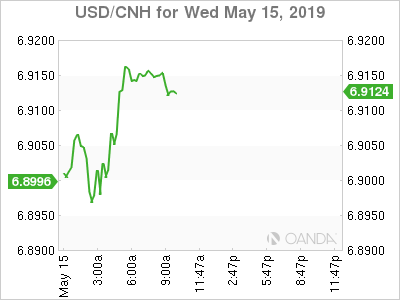 Following softer than expected wage data and horrendous Chinese data, the OIS is now pricing in two rate cuts for 2019 and sees possibly 3 cuts within the next 12 months.  The RBA opted not to adopt an easing bias at the last meeting, but the data since the May 7th meeting has disappointed.

The Australian dollar has found some support after making 4-month lows, but it appears the expected stimulus from the PBOC is unlikely to deliver a big boost for the Australian economy. 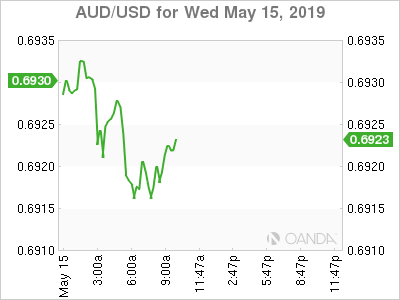 Crude prices continue to wildly fluctuate from global growth concerns from trade war fears, geopolitical risks and higher future production from the US.  Trade war angst is putting a dent with demand concerns and increasing production appears to be driving the move lower today.  Geopolitical risks remain plentiful and that could provide some short-term support, initial support seen at the $60 a barrel level. 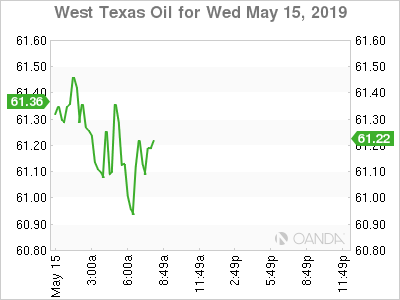