A fresh round of economic data for the US showed a rebound in Housing, continued strength in the labor market and a regional survey showed mostly improvements in the manufacturing sector.  Stocks are poised to open near the overnight highs as investors await the next concrete steps in trade talks.  The Cboe Volatility Indicator, VIX is down 2% at 16.10 as trade war watchers take the recent retaliatory rhetoric from China as nothing to fret about.   The Dow is poised to open over 90 points higher while both the Nasdaq and S&P 500 are looking at gains slightly over 10 points.  The British pound is the worst performing currency as no-deal risks grow and the end appears near for PM May

Yesterday, President Trump kept the fight going on with China, after signing an executive order that targeted Huawei from potentially preventing it from buying American parts for their 5G networks.  After Trump’s order, the Department of Commerce claimed to have put Huawei on a blacklist that will prevent it from working with American businesses.

We saw a similar tactic to ZTE last year and that almost destroyed the company.  This action however will also harm US suppliers Qualcomm, Micron, and Marvell.  Approximately 20% of Huawei’s spend goes to American companies.  Technology shares are down sharply in Asia.  The Nasdaq’s gains are being weighed down on the Huawei news. 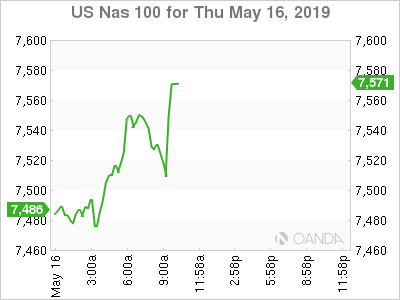 The British pound continues to weaken against the euro, poised for the longest slide since 2000 as no-deal Brexit risks grow.  PM May seems to be not making any material progress in securing any progressive steps towards a deal and it appears the writing is on the wall for her.  Continued calls for her resignation are growing and after this next failure in not securing a deal by the European Parliamentary elections, it only sees inevitable Brexit will need to be delivered by someone else.

Labour remains opposed to voting against that PM May’s name on it, as she will not concede on Labour’s central demand for a permanent customs union in cross-party talks on Brexit.  Her latest legislation appears to be dead on arrival and if that does not pass, it will be hard to see a reason to give her deal a fourth attempt at passing. 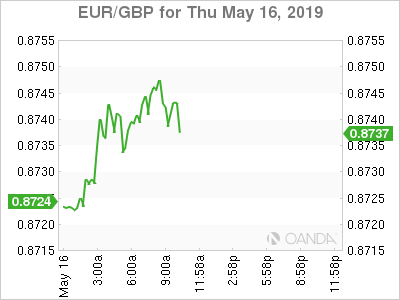 In what is being consider a response to trade tensions with the US, China’s reduced their US Treasuries holdings, now at a 2-year low and appears poised to test the levels seen at the financial crisis.  The reduction of $10.4 billion in Treasuries brought down their portfolio to $1.12 trillion, the first decline since November.

Back in January of 2018, China shook the bond market when they announced they were favoring a slowing or halting of purchases of US Treasuries.  Bond markets have prospered with a three-decade bull market and that could coming to an end if we see the Chinese avoid buying US debt during a time when central banks are considering upping their bond-buying stimulus. 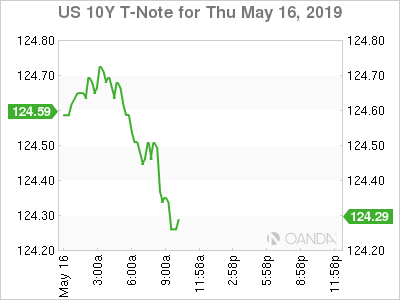 Crude prices are rising for a third consecutive day after the EIA report was bullish for gasoline inventories and geopolitics risk remain on high alert in the Middle East.  The key driver for oil is coming out of the Persian Gulf.  Saudi Arabia’s Vice Minister of Defense noted Tehran was behind the Sunday Houthi terrorist attacks.  Other drivers for crude is the news that Iraq could be selling more oil to Turkey, filling the void left from Iran. 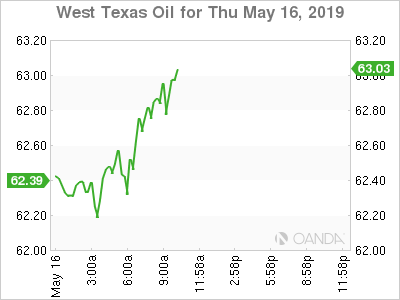 Some are saying gold is lower on technical selling, others profit taking, and trade optimism roughly rounds out the rest.  The yellow metal remains beleaguered on global deflationary conditions and optimism that both the Americans and Chinese cannot afford lose any political capital domestically with a complete collapse in trade talks. 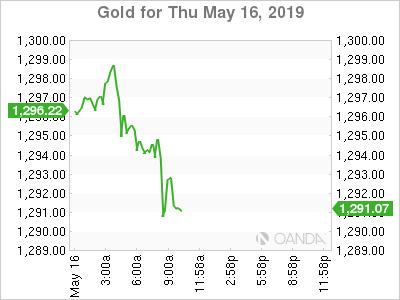