European and Chinese stocks markets are selling off from critical comments from Beijing that put a dent in trade talk optimism.  Flight to safety is the early morning theme and we may see that continue if we see softer Michigan sentiment and leading index data just after the open.  Safe-haven currencies, the Japanese yen and Swiss franc are outperforming with the early risk averse flows.  Before the open President Trump confirmed the delay of auto tariffs for at least 180 days, that news was heavily priced in and saw a slight bid with equities.

Last night, multiple comments and reports confirmed China was switching to a firm stance on holding off talks until the US changes tactics.  China foreign minister Lu Kang reiterated China’s frustration with the US measures on Huawei and the effect to 5G going forward.  He added that China will take necessary measures to safeguard its rights and interests.  The foreign minister also confirmed earlier reports that no details exist on a Trump -Xi meeting.

The Editor-in-chief of the Global Times Hu Xijin tweeted, “The US Commerce Department put Huawei on its Entity List, making trade war more like a real ‘war’. Trade talks have been stuck in deep shock. The Chinese are more convinced concessions won’t bring peace. The only way for China is to strengthen independent research & development.”

The onshore yuan fell to the weakest levels since December. 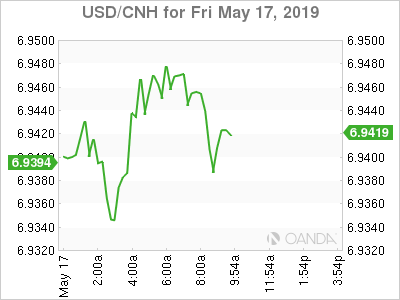 The British pound continues to fall against all its major trading partners as Theresa May’s premiership nears an end.  Labour’s abandonment of talks pretty much cements the end of May’s deal getting pushed through.  Despite the high likelihood of her not delivering Brexit, she remains committed to put her bill up for one final vote.  She is considering the next step of indicative votes, but that probably does not matter as Labour is set on not working with a government that is about to collapse.

Former Foreign Secretary Boris Johnson will be one of the favorites to replace May, but regardless of who takes over, they will still have the same deadlock that May is dealing with.  Brexit is poised to drag on longer than anyone wants. 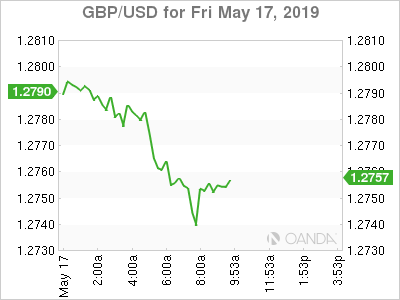 Spain’s economy has outperformed in Europe and investors are viewing Spanish bonds as a safer investment versus the rest of the periphery.  Spain’s 10-year yield fell to fresh record lows of 0.861% before settling back around the 0.863 level.  Spain’s bond market has provided investors with great yield for what was once considered one of the riskiest investments.

Italy’s 10-year yields came down sharply as markets appreciated the Deputy Prime Minister Di Maio’s de-escalation of his coalition partner Salvini’s comments that Italy will break the EU fiscal rules.  Di Maio noted that nobody wants to go 140%, otherwise debt-to-GDP level would be out of control.

The euro is mixed against the majors with the biggest declines to the Japanese yen. 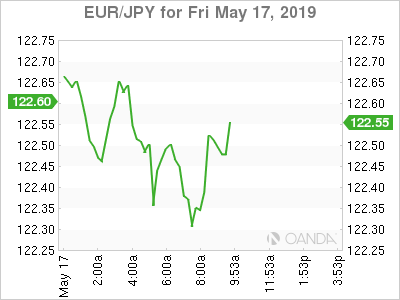 Geopolitical risks are the fire that keeps crude prices rising, with both Brent and WTI poised for another strong weekly gain, but respectively few dollars shy of their highs seen last month.  Brent’s backwardation is seeing the spread continue to widen between the 1-and 3-month spreads as risks to supply remain elevated in the Persian Gulf, Russia’s contaminated crude to Europe, and OPEC’s spare capacity might fall short of covering oil output that is at risk.

This weekend’s OPEC + alliance meeting will likely deliver some queues, but nothing concrete that will signal how production targets will be changed.  The technical meeting is a risk for seeing the alliance fall apart, but the most likely scenario is that they punt to June meeting. 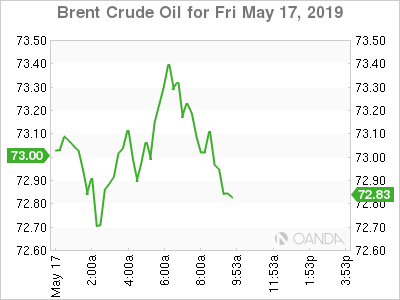 The risk-off tone is not delivering a strong bid for gold today, and that is mainly attributed to the overall strength we saw with US data this week and optimistic outlooks we saw on the corporate front.  China’s fading interest to resume talks is putting a dent in equities, but the overall belief still remains that both sides will eventually move the needle closer to outlining a deal. 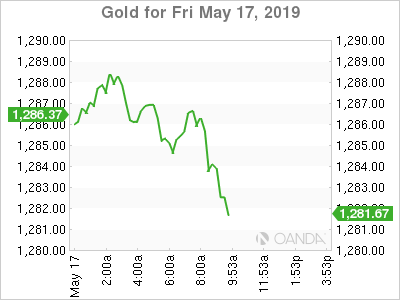