Fed’s Rate Cut On The Horizon

USD weakened against a number of its counterparts as arguments for a possible rate cut by the Fed increased. Yesterday, St. Louis Fed President James Bullard stated that an interest rate cut by the Fed “may be warranted soon”. Mr. Bullard also stated that the unexpected announcement of tariffs on US imports from Mexico have shaped an environment of elevated uncertainty. According to media reports he also mentioned that the trade dispute may have a larger impact on global markets in which case a rate cut may provide insurance on economic slowdown. Treasury yields had been already in a decline as investors had showed a strong demand for US treasury bonds in an effort to reduce risk. Also the ISM Manufacturing PMI reached its lowest reading in over two years, as US manufacturers expressed their concerns about the trade wars. It would be interesting to note that the USD had retreated even against currencies such as the EUR with weak fundamentals. Should the current uncertainty continue, we could see USD weakening even further, yet we wouldn’t be surprised if the market absorbed the news and USD stabilized within the day. EUR/USD rallied yesterday broke consecutively the 1.1175 (S2) and the 1.1220 (S1) resistance lines (now turned to support and tested the 1.1260 (R1) resistance level. Technically the pair is expected to maintain bullish tendencies, yet should the USD side start to correct we could see EUR/USD dropping. Please note that the RSI indicator in the 4 hour chart is also advising caution, as it is clearly above the reading of 70 and could be implying an overcrowded long position for the pair. Should the bulls continue to dictate the pair’s direction, we could see it breaking the 1.1260 (R1) resistance line and aim for the 1.1300 (R2) resistance level. On the flip side should the bears take over, we could see the pair breaking the 1.1220 (S1) support line and aim for the 1.1175 (S2) support barrier.

AUD gained somewhat against the USD during today’s Asian session, as the RBA released its interest rate decision. The bank decided to cut rates by 25 basis points reaching +1.25% in comparison to prior level of 1.50%. In its accompanying statement, the bank maintained a rather cautious stance but no clear dovish bias towards another rate cut was evident. It should be noted that the bank seems to be focusing on the Australian labour market as the decision stems in the bank’s efforts to boost it. The decision does not seem to provide a stable support for the Aussie as uncertainty remains present in the bank’s outlook, however it should be noted that it is a record low level for RBA’s interest rates. AUD/USD had some bullish tendencies yesterday and during today’s Asian session, aiming for the 0.7000 (R1) resistance line. The pair could continue to have some bullish tendencies as the financial releases (today and early tomorrow) are expected to favor the AUD and weaken the USD. Should the pair’s long positions be favored by the market we could see it breaking the 0.7000 (R1) resistance line. Should the pair come under the selling interest of the market, we could see it breaking the 0.6920 support line.

Today during the European session we get UK’s construction PMI for May and Eurozone’s preliminary CPI rate for May. In the American session we get the US factory orders growth rate for April and in tomorrow’s Asian session we get Australia’s GDP rate for Q1 as well as China’s Caixin non-manufacturing PMI for May. As for speakers please note RBA Governor Lowe, Chicago Fed President Evans, NY Fed President Williams, Fed Chair Powell, Fed’s Brainard and Dallas Fed President Kaplan speak. We expect Powell’s speech to be closely monitored by the market as it may include hints about the Fed’s future intentions, especially after James Bullard’s comments yesterday. 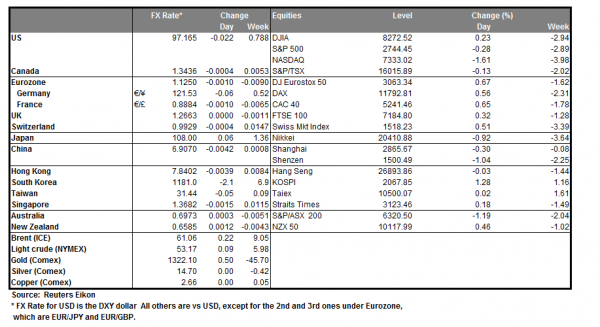