Markets remain cautious as Chinese data continues to soften as the effects of US tariff war increase and as tensions remain on high alert between the US and Iran.  American officials unveiled images of an Iranian navy ship removing an unexploded mine off the hull of the Japanese-owned chemical tanker Kokura Courageous.   The attack in the Gulf of Oman follows a barrage of attacks that occurred a month ago in the Strait of Hormuz.  The crippling impact of US sanctions on the Iranian economy is likely to see continued retaliation with the disruption of vital oil shipping lanes.  Iran is selling oil at discount and will try to prop up prices.  Markets are wary if this situation will lead to another US conflict in the Middle East, but expectations are that will not be the case.

The US retail sales release in North America saw limited market reactions in equities, but a slight bid for the US dollar.  The US retail sales data for the month of May rebounded and the prior month was revised higher.  Mostly coming in better than expected, the report still will do little to ease deceleration growth concerns for the second quarter. Today’s reading did not help tilt the scale for the Fed to be urgent in cutting rates.  S&P 500 is poised to open 0.2% lower, while the Nasdaq is down 0.7%, also being weighed by the Broadcom’s disappointing quarterly results and slashed guidance. 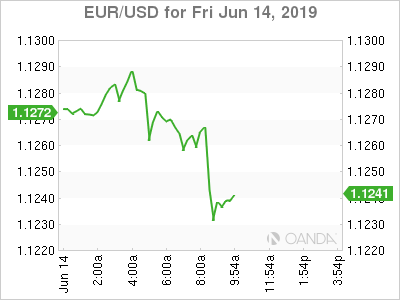 Softer than expected factory data sent Chinese indexes lower, with the CSI 300 Index leading the decline with 0.8% drop.  China’s industrial output growth dropped to worst pace since 2002, up 5.0% from a year earlier.  Investments also slumped with a 5.6% gain, missing expectations and down from a month ago.  Retail sales did provide a nice beat, but that was mainly attributed to the May Day holiday.

As the private sector grows cautious and the effects of the extended trade war continue to weigh on business, expectations remain high for the PBOC to deliver more easing in the immediate future.  The end of month G20 summit remains the biggest risk event for Chinese markets.  Any stimulus released by Beijing may just help the market from continuing to selloff.  In order for Chinese equities to see sustained gains, meaningful trade progress is required, a de-escalation in tariffs from the US.

The situation in Hong Kong remains tense, but key officials are starting to waver on the immediate insistence on pushing the proposed extradition bill forward.  Beijing is expected to ultimately follow through in pushing this bill forward, but they may choose to wait until trade deals are done with the US.  If the US makes the Hong Kong situation part of the trade negotiations, we may never see a deal done. 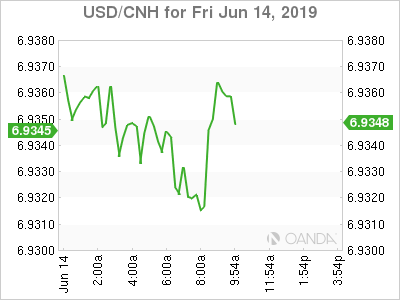 The Russian central bank (CBR) cut their key rate for the first time since March 2018, also delivering a dovish tilt that suggest more cuts could be coming.  The CBR cut both their growth and inflation forecasts.

It appears that we could be see many more central banks adopt additional easing, especially since we are likely to see the two largest economies delivering fresh stimulus.  The global growth slowdown is likely to see emerging markets see more easing money flowing around this summer. Chile and India also recently delivered rate cuts and next week we will hear from the Fed.

Crude prices pared yesterday’s gains that stemmed from attacks on two oil vessels in the Gulf of Oman.  Geopolitical risks appear to be the only bullish driver for stronger oil prices.  Oil is struggling to muster a meaningful rally as trade war uncertainty is hurting global demand and US production is expected to continue deliver fresh record levels.

Instability in the Middle East region is likely to intensify in the coming months as the US sanctions continue to take a toll on the Iranian economy and the Trump administration has no interest in resuming talks.  Japanese PM Abe’s two-day visit was hoping to ease tensions with Tehran and aim to find a diplomatic solution, but it appears the trip yielded no progress.  Trump tweeted, “I personally feel that it is too soon to even think about making a deal. They are not ready, and neither are we!”

Tensions between the US and Tehran remain high as the US is blaming Iran for the attacks on two oil tankers.  The situation remains tense, but we may not this news cycle be much of a catalyst for higher oil.  The key to seeing oil rally in the short-term may require a falling US dollar, which could continue to happen once the Fed cuts rates. 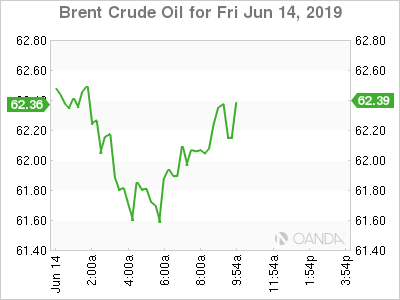 Gold is breaking out on geopolitical risks, Fed easing expectations and continuing global growth concerns.  The main catalyst that took the yellow metal above the $1,350 an ounce level was Mideast tensions that are threatening a major global oil route.  The economic war that US and Iran are battling out is at risk about growing into a major conflict that could see military action.  Mideast tensions will not be going away anytime soon and any flareups could see gold extend its gains.

The yellow metal is also firming up ahead of next week’s FOMC decision, which are seeing the odds go up for the Fed to deliver a rate cut.  Future markets see a 30% for a hike next week, while 87.5% chance for the July meeting.  A weakening dollar could help key gold in demand next week, and many investors are scrambling to own it as ETF holdings continue to rise. 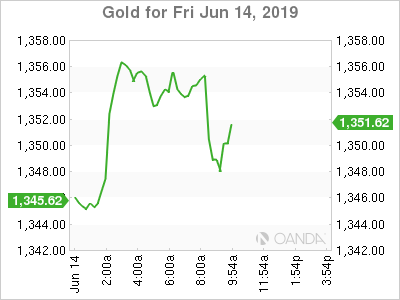