It’s already been a quite a week for the UK, with leadership elections taking place as we continue to edge towards the final two that will face the Conservative membership to become the next Prime Minister.

It’s not often that the Bank of England is overshadowed but this week is certainly one of those and with Brexit on the horizon, they may have to get used to playing second fiddle. Given their experience of the last few years, I’m sure Governor Mark Carney and his colleagues will have no issue with not being in the spotlight for a while.

Still, while they may not have the leading role this week, they may still have a part to play. Granted, it’s not “Super Thursday” so there’s no press conference and no new economic projections but there is a statement released alongside the announcement which may contain some hints. That said, markets are currently pricing in nothing for the next 12 months at least.

Where do we stand in the race to become PM?

The pound is going to continue to be volatile over the coming days, with at least one, probably two votes, still to go before we learn which candidates will make the final two. Boris Johnson looks all-but certain to make up half of the duo, leaving the remaining candidates to fight it out for the other spot. 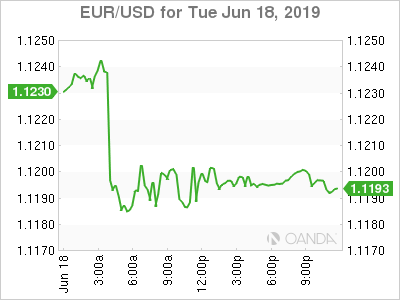 The elimination of Dominic Raab on Tuesday will likely come as a relief. Raab had previously promised to leave on 31 October even if it meant doing so without the backing of Parliament. Johnson has also alluded to similar so a duo including the two would likely have been the worst-case scenario for the pound.

Others may not be so attached to 31 October but one thing they all have in common is they want to deliver on the referendum result, they just have their own ideas on how that will be achieved and where their own red lines are drawn, which is where sterling volatility comes back into it.

Will the pound continue to fall?

Ultimately, the pound has been on a slippery slope for the last month or so as it became perfectly clear that Boris isn’t only leading but he’s running away with it. From what we know about the Conservative membership – who will vote on the final two over the course of a month – he seems to fit the bill on what they want on Brexit more than anyone else.

Of course, there’s always room for a surprise, especially when it comes to a binary vote. It’s almost three years to the day that so many – including the markets – were convinced that the UK would in fact vote to remain in the European Union. If nothing else, it would have made the last few years more tolerable.

To bring this back to the BoE, with so much uncertainty in the UK right now and the global outlook cloudy at best, it’s no wonder expectations for rate hikes or cuts are so low. This may make the BoE announcement a little dull on this occasion but there’s no lack of other catalyst.

We’ll also get some retail sales data on Thursday, following the release of the inflation figures on Wednesday showing CPI is running around the BoE’s target. Again, this may be overshadowed but it may be a little more exciting than the BoE.

One thing all the charts below have in common is that we’re starting to see divergences, with the momentum indicators – particularly the MACD histogram – no longer making new lows alongside price. While this doesn’t indicate an immediate reversal, it does suggest the trend is running out of steam.

British Pound Trading A Tad Higher In The Morning Session