G20 summits usually pass without any market reaction, but this time will probably be different, as the American and Chinese leaders are expected to meet to discuss trade. It’s a close call, but an agreement to restart negotiations seems more likely than nothing at all being agreed. If so, that could propel stocks higher, and take some shine off safe havens like the yen, franc, and gold.

The G20 conference in Japan will run from Friday through Saturday, and markets are laser-focused on a meeting between Presidents Trump and Xi that is expected to take place on the final day. The hope is that they can iron out some of their trade differences, paving the way for a formal resumption of the negotiations that broke down last month.

The US has threatened tariffs on another $300bn worth of Chinese products and has already started the hearings for imposing these duties, so what happens this weekend will likely determine whether the trade war escalates further, or whether it quiets down again.

Crucial for markets, and central banks

Naturally, the signals the two Presidents send could have long-lasting implications for markets, not only directly via the risk sentiment channel, but also indirectly by influencing how aggressively the major central banks will cut rates. Risky assets like stocks and havens such as the Japanese yen will probably see the biggest reaction, though the dollar may also move if the outcome is seen as making the Fed more – or less – likely to ease. 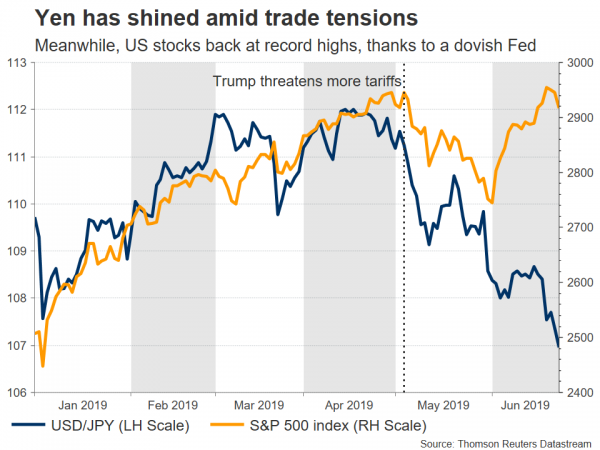 Both sides want a truce

Predicting how such events will play out is a notoriously difficult task, but on the margin, the most likely outcome appears that of de-escalation. The two sides could strike a conciliatory tone and indicate they will restart sincere talks, with the US postponing any new tariffs while the discussions are ongoing.

Simply put, Trump wants more talks – as evidenced by him calling Xi lately – and China is unlikely to refuse. Even if the two camps remain far apart on key issues, they still have an incentive to portray a positive picture, for fear of further damaging business sentiment in their home economies if they don’t. From Trump’s point of view, imposing more tariffs may also be politically problematic as many of the goods in question are core consumer products like phones and computers, taxes on which might anger voters ahead of the 2020 election race. 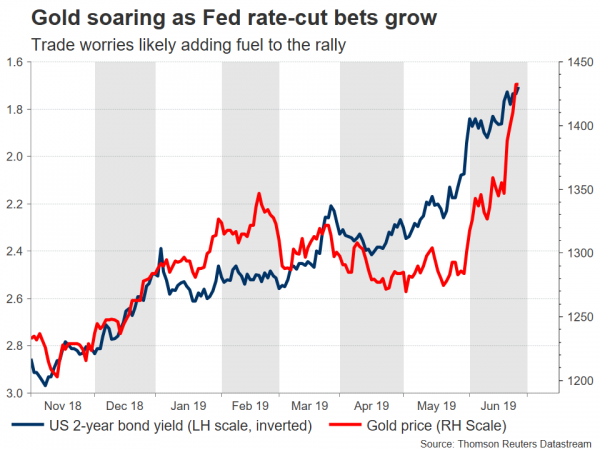 In this scenario, stocks would likely rally alongside commodity currencies like the aussie and kiwi. The dollar may tick higher too, as the optimism could diminish the odds that the Fed delivers an aggressive 50bps rate cut at its July meeting. Meanwhile, the yen, Swiss franc, and gold could all give back some of their latest gains.

But Trump may still try to play hardball

The flipside to the above is that with US stock markets at all-time highs and the Fed set to ease soon, Trump might feel he has more leverage than Xi does, and attempt to play ‘hardball’ again. The risk therefore is that Trump sticks to demands that Xi finds unreasonable, causing this summit to conclude without any hints for new talks.

This would be the worst-case scenario for markets. It may raise the likelihood that the US proceeds with more tariffs, sending equities lower and safe havens higher. The ‘good news’ is that fresh tensions could weigh on sentiment so much the Fed becomes more likely to act forcefully and shock markets with a 50bps rate cut in July – a factor which would likely hurt the dollar, but keep any drop in equities contained.

Taking a look at dollar/yen, an agreement to restart talks may see the pair edge higher towards the 107.80 zone, which capped the drop in early June. An upside break may open the door for 108.80.

On the flipside, a failure to reach a truce could initially push dollar/yen lower towards 106.75. Even lower, the 105.65 region would attract attention, marked by the lows of April 2018.