Thursday July 4: Five things the markets are talking about

Global equity markets are enjoying a rally driven by the trade truce between the U.S and China and bets on easier monetary policy from central banks. Top representatives from the U.S and China are arranging to resume talks next week to try to resolve this 12-month trade war.

Currently, the ‘big’ dollar trades broadly flat due to the U.S. public holiday but could be vulnerable and ruin traders’ weekend if tomorrow’s U.S non-farm payroll (NFP) data comes in on the weaker side.

Dealers are also keeping an eye on any new comments from President Trump that hints at “devaluing” the dollar – he tweeted Wednesday that China and Europe were manipulating their currencies, and that the U.S should follow suit.

On tap: U.S equity markets are closed today for the Independence Day holiday. U.S and Canada jobs report are due Friday (08:30 am ET).

In Japan, stocks rallied overnight, tracking Wall Street’s gains on expectations that the Fed will start cutting interest rates after the latest data signalled a slowdown in the U.S economy. Data yesterday showed that the U.S trade deficit jumped to a five-month high in May and activity in the services sector slowed in June – dealers are pricing in three-rate cuts by the end of 2019. The Nikkei share average ended +0.3% higher, while the broader Topix gained +0.7%.

Down-under, Aussie stocks ended atop of their 11-year high overnight as expectations for RBA and Fed interest rate cuts encouraged investors to own riskier assets. The S&P/ASX 200 index rose +0.5%, its fourth consecutive session of gains. The benchmark rose +0.5% on Wednesday. In S. Korea, stocks snapped a four-day losing streak on FOMC rate cut bets. The Kospi index closed up +0.61%.

U.S stock exchanges are closed due to Independence Day celebrations. 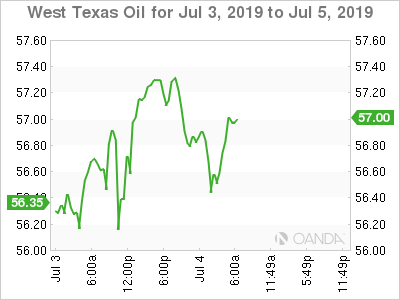 This week’s API report delivered another drop-in inventory with crude falling by -5M barrels, while the EIA weekly report showed a similar drawdown with crude stock shrinking by -1.1M, less than the expectations of a -3M drawdown.

Oil prices have been caught between the OPEC+ deal and the threat of a global recession as trade wars are on the rise. OPEC+ agreed on Tuesday to extend oil supply cuts until March 2020.

Gold prices are steady after hitting a one-week high in yesterday’s session, as gains in equity markets offset support from a ‘weaker’ U.S dollar and prospects of an interest rate cut by the Fed. Spot gold is broadly unchanged at +$1,418.60 per ounce – prices touched +$1,435.99 on Wednesday, the highest since June 25. U.S gold futures are up +0.1% at +$1,421.7 an ounce. 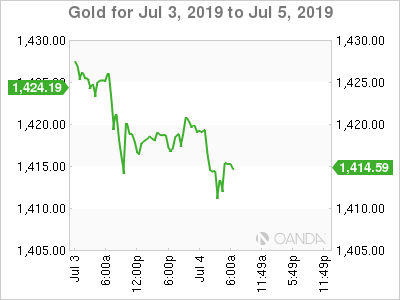 Eurozone government bond yields appear to have stabilized at low levels after yesterday’s significant drops, triggered by expectations that the ECB will continue expansionary policy.

The 10-year German Bund yield is trading unchanged at -0.385%, having printed a new low of -0.397% Tuesday. Investors can expect yields to back up as Government bond supplies are expected to be significant – Spain and France will come to the market with €4.75B in nominal and inflation-linked bonds and up to €10B in long-dated debt.

In Italy, BTP yields have again fallen to a new three-year low after Italy dodged the threat of disciplinary action over its public finances. Italian 10-year bond yields have fallen over -50 bps so far this week, putting them on track for their best weekly performance in seven-years, and are now yielding +1.576%, having risen as high as +3.78% last year. The Italy/Germany bond yield spread has narrowed to its tightest in 18-mlonths at +194 bps. 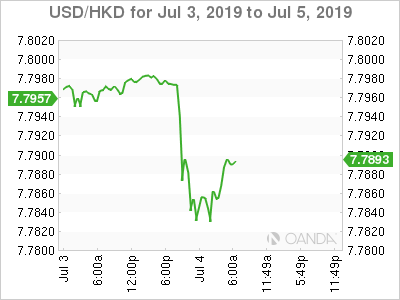 4. Demand for HKD surges ahead of “mega” IPO

HKD hit two-year highs in the overnight session outright ($7.7815 the lowest since May 2017). Most of the recent HKD strength comes as investors are preparing funds to subscribe to Budweiser’s +$9.8B IPO. The retail portion of the IPO will be launched tomorrow, ahead of a July 19 listing in Hong Kong. Budweiser’s fundraising size is bigger than expected and caused “short-covering” trading from some investors who had expected the currency to soften after the quarter-end. Also providing support is the overnight Hibor rate which has surged +0.84% to +3.14%.

Elsewhere, USD is little changed, but fractionally lower – €1.1284, £1.2572 and ¥107.78. The slight retracement is being attributed to Trumps tweet that the U.S should match China and Europe at their “big currency manipulation game.”

Tomorrow’s U.S non-farm payroll (NFP) data is seen as pivotal whether the Fed would shift to rate cuts as soon as it meets later this month (July 30/31). 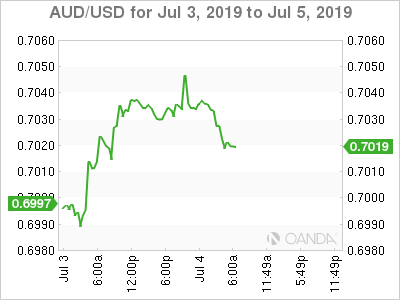 Data late last night showed that retail sales in Australia rose +0.1% in May from a month earlier, rebounding from the -0.1% posted in April but falling short of economists’ expectations of a +0.2% print.

The weak outcome, led by food retailing, department stores and clothing, point to another quarter of slow economic growth.

The report probably justifies the RBA’s second-rate cut (+1%) in a row earlier this week. However, Governor Lowe in a post-meeting speech noted that “monetary policy had a significant role to play in allowing the RBA to hit its inflation goal” but he also called on the government to also do their bit by loosening its purse strings.

Fixed income dealers are pricing in a +90% chance of a third RBA cut to +0.75% before Christmas. 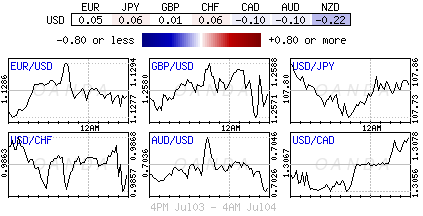