Oil broke it four consecutive days of losses on the back of the news that an American warship down an Iranian drone near the Strait of Hormuz yesterday. President Trump said on Thursday that the US “immediately destroyed” the drown which was only a few thousand yards away. This created a major panic among traders because of disruption of oil supply in the Middle East.

Strait of Hormuz is a critical area because it can choke the oil flow and Iran has the capability to close this as it controls this area. However, Iranian foreign minister, Mohammed Javad Zarif has said that the country has no such intentions because he believe this as there lifeline. Iran plays a critical role in securing this Strait of Hormuz and nearly one third of the world’s seaborne crude passed this area last year. Nearly six tankers were attacked during the last two months and the US has blamed Iran for this.

Oil is up 0.83 percent today and trying to recover its steepest weekly decline (down nearly 7%- something which is not witnessed since May), it is still set to close the week lower. However, WTI is up 17.21 percent year-to-date and Brent has soared 14.26 percent YTD. The below chart shows the weekly percentage loss for WTI. 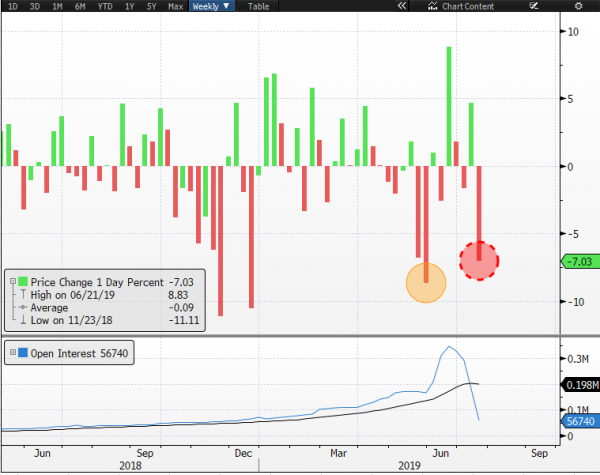 Looking at the speculative market, it is evidently clear the hedge funds are no longer interested in opening any new long oil positions. The chart below shows that the net short and long WTI positions by hedge funds. It is important to keep in mind at this data is as of July 7, so the recent situation isn’t clearly reflected in this data, but one cannot ignore the fact that long speculative positions on oil have fallen to their lowest level since 2013. 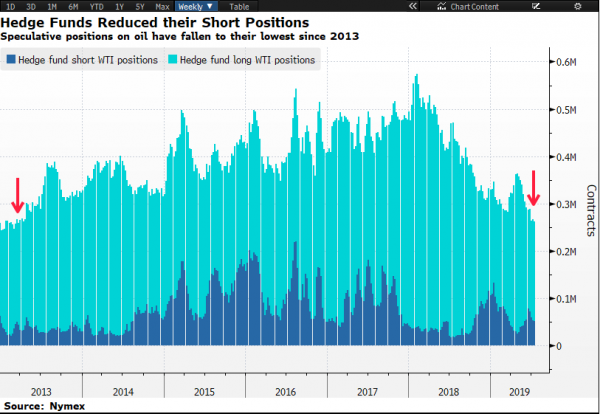 To conclude, the bearish grip is still too strong and there is too much pressure on oil producers to keep the supply in check and the demand equation isn’t showing any sign of recovery due the ongoing trade war between the US and China. I believe that the current mean reversion trade may not last for long unless of course, the geopolitical tensions in the Middle East shifts its gear or by any miracle, Donald Trump makes peace with China.

The near term support for WTI is near $50 (for now) and a break of this may open the door for the price to move towards a major support area of $45. The near term resistance is at $62 followed by the level of $65.