The trade war between Washington and Beijing has flared up, and looks likely to intensify even further, as Trump may use the conflict to score political points ahead of the 2020 US election. In the markets, while stocks may feel some pain, stimulus by the major central banks will likely offset part of those losses. Instead, a far better proxy for any future escalation may be the Japanese yen, which could appreciate further both through the risk sentiment channel and via narrowing interest rate differentials.

The Trump administration’s latest decision to label China as a currency manipulator wreaked havoc in financial markets, pushing stocks lower and haven assets higher, by sending a clear message: the trade war is here to stay. The move came after Beijing let its currency weaken to the lowest level since 2008, which the US saw as an attempt to nullify the impact of its tariffs. A weaker currency boosts a nation’s exports, by making them more competitive abroad.

Admittedly, it’s only natural for the yuan to tumble amid renewed trade threats and a slowing economy – unless China used an even bigger amount of foreign reserves to keep it stable.

Trump’s threat last week to slap tariffs on all remaining Chinese goods effectively tore apart the ‘ceasefire’ agreed earlier in the summer, and alongside the currency manipulation label, poured cold water on expectations for a solution to this ordeal anytime soon.

While negotiations are expected to resume in September, the possibility of a breakthrough seems extremely low. Beijing made it painfully clear that it “no longer expects goodwill” from the US, and is therefore unlikely to make any material concessions on key issues like intellectual property protection – especially to avoid looking bullied by Washington. Not to mention that if Trump goes ahead with the tariffs he threatened, Xi Jinping would likely need to fire back. 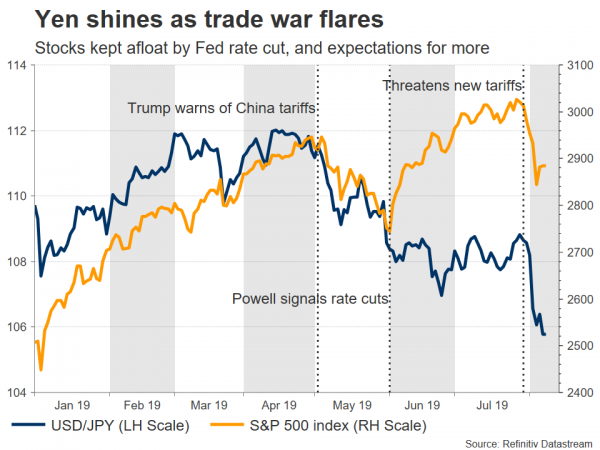 The Chinese side thus looks unlikely to blink in this ‘Mexican standoff’, something also evident by the stimulus measures the nation has already enacted to protect its economy – a sign that it’s digging in for a prolonged fight.

What about Trump? Even though he initially appeared to want a deal so he could present his electoral base with a ‘victory’ ahead of the 2020 election, that is no longer clear. In fact, the opposite may be true. Trump seems to prefer dragging this conflict out in order to energize his base by being the ‘tough on China’ candidate, and also running on the theme that any Democrat president would mess up the negotiations.

Beyond the economic realm, this dispute also has geopolitical dimensions. The most obvious one relates to the South China Sea, which Beijing claims as its own but the international community disputes. The result is that American warships often pass through those waters in ‘freedom of navigation’ operations, infuriating China that sees such moves as violations of its sovereignty.

What is particularly striking is that these US excursions become much more frequent every time the trade war escalates, and less frequent when the talks are making progress, indicating some correlation. Taiwan is a similar matter. China views the island as its own territory, but the US supports its independence and recently agreed to supply it with arms.

The bottom line is that this trade war has all the makings to become a new cold war, especially given this ‘prisoner’s dilemma’ situation where neither side can really back down without losing face.

So where does all this leave financial markets? This conflict is unlikely to be resolved in the foreseeable future, and may in fact escalate from here, as Trump cranks up the rhetoric on the campaign trail. 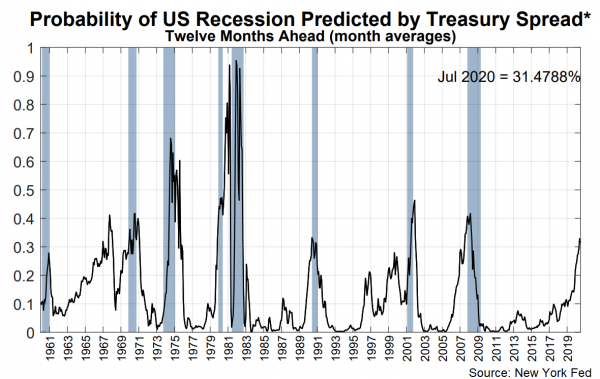 An ever-darkening trade outlook would argue for more frequent waves of risk aversion in the markets, especially if the ongoing uncertainty amplifies fears for a recession, as businesses hold back investment and supply chains are disrupted. New York Fed models already point to a high (and rising) probability for a US recession over the next year.

Hence, investors may divert funds away from riskier assets – such as stocks, the aussie and the kiwi – and into safe havens like the Japanese yen, the Swiss franc, and gold.

Let’s start with stocks. While one would expect equities to take a heavy hit in such conditions, that may not be the case, thanks to the major central banks. Both the Fed and the ECB are preparing to roll out more stimulus, which, the more trade tensions escalate, the bigger it will likely be. Since lower borrowing costs typically boost stocks, this easing can offset the negative impact from the trade war, at least partially.

In other words, we are currently in a paradigm where ‘bad news is good news for stocks’, as more tensions mean more stimulus. For that to change, the situation would probably need to deteriorate to the point where investors no longer believe that monetary easing can meaningfully support the economy, leading them to dump stocks.

In the FX arena, the biggest winner may be the Japanese yen. The haven currency is already the best performer of 2019 so far and may have more room to gain on two key themes: risk aversion and monetary policy convergence. The first is obvious – the yen attracts demand in times of turmoil, given Japan’s status as the world’s largest creditor nation. 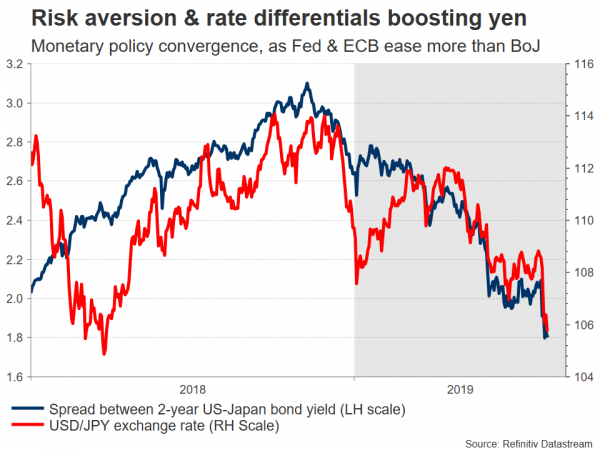 On the monetary front, the Bank of Japan already has a gargantuan stimulus program in place, which implies it has very limited firepower to ease any further. Meanwhile, the Fed and the ECB are preparing to cut again, so rate differentials between Japan and the rest of the world will likely narrow in the yen’s favor, increasing its appeal.

As for the franc, although the arguments for it to gain are very similar to the yen’s – with haven status and an exhausted central bank – the key difference is that the SNB actively intervenes in the FX market to weaken the currency, so any appreciation may be smaller in magnitude.

Turning to gold, the outlook remains bright despite the recent gains. Lower interest rates globally, a weaker dollar if the Fed ‘outguns’ other central banks in easing policy, and classic safe-haven demand all argue for the rally to continue.

Overall, the prospect of a deal – at least before the 2020 election – looks bleak. The two sides remain far apart on the big issues, and another round of escalation is likely imminent given Trump’s ‘hardball’ approach. China doesn’t want to be bullied, so it probably won’t give Trump the major concessions he wants, especially given his confrontational stance in geopolitical matters.

What would it take for Trump to soften his demands and actually seek a deal? In all probability, a weaker US economy or a sharp decline in stock markets, or both. As long as the US economy stays solid, Trump believes he has the upper hand, and can afford to play the ‘tough-on-China’ role. However, if recession concerns combined with trade worries really start to bite the economy, then his approval ratings could start sinking, forcing him to compromise.

That said, we are still a long way off from that point, and more pain is likely needed to get us there.