Fed Chair Powell did not deliver a memorable moment like Ben Bernanke did when he announced additional QE efforts.  Powell refrained from promising more stimulus and he clearly decided he will wait for the global economic slowdown to worsen before signaling an aggressive easing campaign.  Powell’s Jackson Hole speech did not mention a mid-cycle adjustment and investors could take that as a hint that he is probably closer to an easing cycle than just seeing couple of rate cuts.

Fed funds futures are showing an expectation of 61 basis points of rate cuts this year.  Powell’s speech pretty much cements in only a 25 basis-point cut in September, disappointing doves and making it unlikely we will see US stocks make another run to record territory.

The Fed is sensitive to the recent sharp downward move with long-term bond rates, trade uncertainties, weakness in China and Germany, Brexit, Hong Kong, and the dissolution of the Italian government, so that alone will keep markets stubbornly optimistic we will eventually see an easing cycle from the Fed and another round of QE.

Rate cuts can only do so much for the US economy and we should see arguments more QE grow over the coming months.

China’s measured trade war response sent risky assets tumbling ahead of Fed Chair Powell’s Jackson Hole speech.  The trade war’s latest chapter saw China unveil a new round retaliatory tariffs on $75 billion worth of US goods.  These new tariffs timelines echo the US punitive measures and will keep the trade war as the primary risk event for the rest of the year.

China can’t match the US tariffs on imports, so markets should breathe of a sigh of relief we did not see a more creative way of punishing the US.  If we eventually see China become more aggressive in selling off their US Treasuries holdings, adding US companies to their unreliable entities list, or limiting exports of rare earths, you can throw out the bullish case for US equities out the window and expect a significant panic.

With recession concerns brewing in the US, the Chinese must feel added pressure to the US consumer will keep the US motivated in securing a deal, or at the very least not allow the trade war to escalate much further.

Trade talks are still expected to happen to September and financial markets will likely remain nervous that we could see an additional threat from President Trump.  With recession concerns being so elevated and the election just over a year away, Trump might do a lot of posturing in the coming weeks, but markets may be more skeptical that he will follow through on additional threats.

Despite a plethora of stimulus from the world’s largest central banks, trade

Now that we know where the Fed stands, the focus shifts to the G7.  Investors are not expecting a communique from the Summit held in France, but for updates on global trade, Brexit and possible coordinated fiscal stimulus efforts from Germany and France.

During the last global recession, the G7 summit was an opportunity for world leaders to show unity on what can be done to help the global economy.  The bar is low to get many assurances from Biarritz and we could see continued division on key topics of trade, NATO defense funding, and Brexit.  Some common ground could be found on Iran and stricter measures for cryptocurrencies.

Oil prices tumbled after China announced retaliatory tariff measures, a reminder that the two largest economies are far from reaching a deal.  Risks to demand outlooks are high as the trade war remains tense and after Fed Chair Powell failed to deliver a strong easing campaign.  Fed Chair Powell kept the door open for further stimulus, but we will not see it as quickly as markets may have initially expected.

Crude will struggle here as significant risks to the global economy and delayed stimulus from the US will dampen demand forecasts. 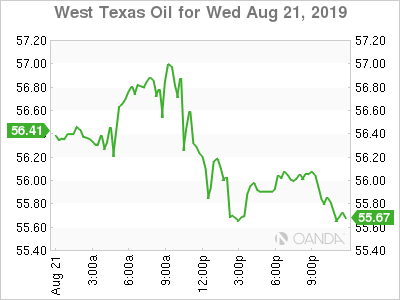 Gold resumed its bullish trend as Powell’s Jackson Hole speech reminded markets of all the risks to the global economy, while failing to commit to an easing cycle.  We should not be surprised if we see the Fed deliver a full percentage point in rate cuts over the next 12 months and a new QE program as we may only need a couple of the following macro events to blow up: trade uncertainties, weakness in China and Germany, Brexit, Hong Kong, and the dissolution of the Italian government. 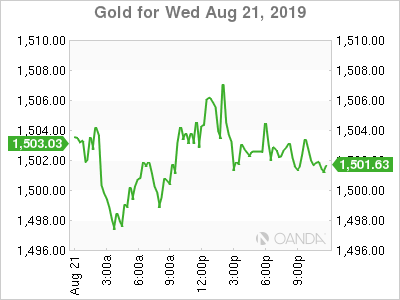