The USD strengthened against a number of its counterparts yesterday, in the aftermath of the attack on Saudi Arabia. Analysts tend to note that the authorization by President Trump to use the US strategic petroleum reserve and its readiness to respond to the attack provided the necessary confidence for the USD. Also, they mention that another factor supporting the USD maybe the market’s expectations about the Fed’s meeting on Wednesday and especially the degree of uncertainty factored into the decision. We also consider the recent statements by US president Trump about the US reaching a deal with Japan as another bullish signal for the USD. The US President said on Monday that Washington had struck trade deals with Tokyo, which would not require the approval of congress. The US President though, refrained from stating that no tariffs would be levied on Japanese cars. Japanese finance minister Aso stated that the deal would not affect currency rates, leaving the possibility of an intervention open. We expect the USD to maintain a degree of volatility today, as the market’s sentiment about the Fed’s upcoming meeting could change. EUR/USD dropped yesterday, breaking the 1.1050 (R1) support line (now turned to resistance), yet our 1.1010 (S1) support level held its ground. As the pair failed to break the 1.1010 (S1) support line, we could see the pair maintaining a sideways movement, yet as the Fed’s meeting is beginning and the release of the decision is drawing near, volatility especially for the USD side of the pair, could increase volatility to either direction. Should the pair come under the selling interest of the market, we could see it breaking the 1.1010 (S1) support line and aim for the 1.0950 (S2) support level. Should the pair’s long positions be favoured by the market, we could see the pair breaking the 1.1050 (R1) resistance line aiming for higher grounds.

The pound retreated yesterday against the USD, relenting some of Friday’s gains as uncertainty about Brexit persisted. Uncertainty was fueled as the meeting of Boris Johnson; UK’s PM with EU Commission President Juncker underscored the differences of the two sides about the issue. After the meeting, officials of the EU team stated that the UK has still not presented any proposals about the Irish backstop, while the PM of Luxemburg stated that Brexit is a nightmare. The main issue about Brexit, seems to be that despite the UK Parliament avoiding at least currently the possibility of a hard Brexit, the UK has still a long way to go in order to strike a deal with the EU about the issue. We expect Brexit to continue to dominate the headlines, yet UK financial releases could also start catching the trader’s eye in the coming days. Cable slipped yesterday, testing the 1.2400 (S1) support line which seems to be holding. The pair’s long positions may be favored today should there be positive headlines about Brexit, or if the market starts preparing for a dovish Fed decision tomorrow. On the flip side, should negative Brexit headlines appear once again, we could seethe pair dropping further. Should the bears dictate the pair’s direction, we could see cable breaking the 1.2400 (S1) support line which served the pair well over the night and aim for the 1.2310 (S2) support level. Should the bulls take over, we could see the pair aiming if not breaking the 1.2510 (R1) resistance line. 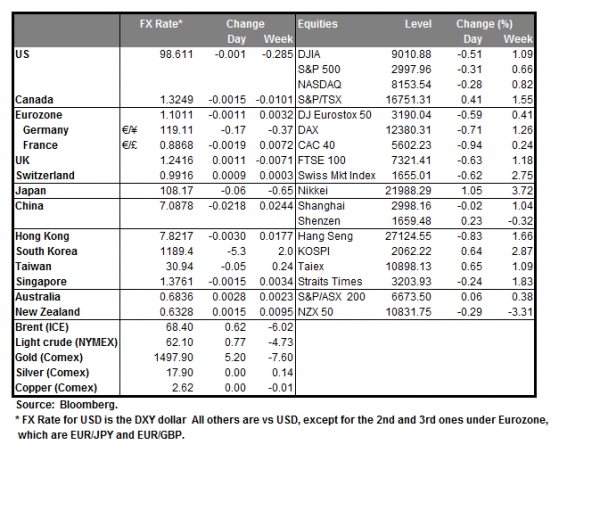