During the Asian session today, safe havens such as the JPY weakened and commodity currencies like the Aussie gained as hopes about a possible “small” US-Sino deal were enhanced. Bloomberg released a report stating that the US was weighing a currency pact with China as part of a partial deal. The report also stated that such a deal could instigate a postponement of the looming US tariffs on Chinese products, scheduled for later this month. It should be noted that earlier during the Asian session Chinese media had stated that the negotiations would probably be led to a stalemate as no progress was made and Chinese Vice Premier Liu He planned leaving one day earlier. The contrast in the risk profile of the market sentiment occurring from the two releases intensified the effects on the FX market. As negotiations are about to begin, we expect headlines and volatility to be increased, as market sentiment could be swayed frequently. AUD/USD rose during the Asian session today, breaking the 0.6740 (S1) resistance line, now turned to support. We tend maintain a bullish outlook for the pair, if the US-Sino negotiations start producing positive results, yet the release of the US inflation rates during the American session could be favouring the USD side of the pair. If the pair finds fresh buying orders along its path, we could see it aiming if not breaking thee 0.6800 (R1) resistance line. Should the pair come under the selling interest of the market, we could see the pair, breaking the 0.6740 (S1) support line and aim for the 0.6675 (S2) support level.

The minutes of the FOMC’s last meeting were released late in the American session yesterday and provided a picture of a rather divided Fed. Albeit most members voted for a rate cut, they also seemed divided as for the bank’s future moves. 7 out of 17 policymakers indicated that another rate cut would be appropriate by year’s end, while the rest favored for the bank to remain on hold or hike rates. It should be noted that the market continues to price in another rate cut, currently by 82.2%, indicative of the dovish sentiment. We also expect Fed policymakers to intensify their statements, probably preparing the market about the bank’s intentions in the next couple of weeks. The release had little impact on the market as such, and we tend to expect the USD to be affected by today’s financial releases and the US-Sino negotiations. USD/JPY landed higher than the 107.20 (S1) resistance line, now turned to support as the bulls were able to take the lead after Bloomberg’s article. Should the positive headlines about the US-Sino relationships continue and the US financial releases favour the greenback, we could see the pair rising further. If the bulls maintain control over the pair’s direction, we could see it breaking the 107.75 (R1) resistance line and aim for the 108.35 (R2) resistance level. Should the bears take over, we could see the pair dropping and breaking the 107.20 (S1) support line and aim for the 106.60 (S2) support level.

With a rather packed calendar today, we get during the European session Germany’s trade data for August, Norway’s and Sweden’s inflation rates for September and from the UK the GDP and manufacturing growth rates for August as well as the UK’s trade balance for August. In the American session, we get the US inflation rates for September. As for speakers, please note that Minneapolis Fed President Neel Kashkari, San Francisco Fed President Daly, ECBs’ Philip Lane and Cleveland Fed President Mester speak. Also please bear in mind that ECB’s account of its last policy meeting is due out as well as OPEC’s monthly report for oil traders. 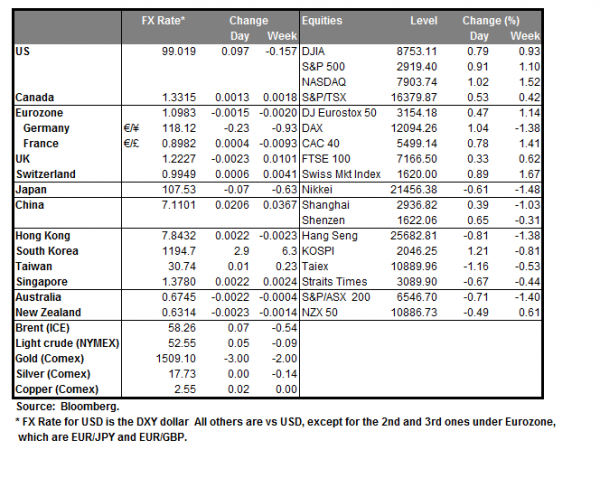