Equities have edged cautiously lower overnight with ASX Futures down -0.5% as markets look to get more details around the when, what and how of Trump’s “substantial phase one deal” announced on October 11. US Treasury Steve Mnuchin was quoted saying that he expects a China deal before Dec. 15; and subsequently if no deal is reached by that time, Dec. 15 tariffs will come into effect – a familiar veiled threat. His comments are a poignant reminder that there’s still plenty of water to go under the bridge before a deal in writing is finalised; meaning there’s room for conflicting signals from both sides and therefore downside risk concerning an escalation of tariffs. It’s been touted that the signing of phase 1 could take place between Trump and Xi at the Asia Pacific Economic Cooperation summit held in Chile on Nov. 16-17. However, in-between now and then, we’re also due to see a principal-level call sometime next week. USDJPY got as low as 108 but has since crept back up to 108.38 at time of writing.

On the calendar, Aussie traders get a look at RBA minutes due out at 11.30am AEDT. These minutes explain in more detail the RBA’s considerations around their October 25bps rate cut. It’s unlikely we’ll see anything new given how consistent the RBA have been in delivering a message that suggests an “extended period of time of low interest rates” is reasonable for Australia to reach full employment. What will be interesting though is whether the RBA keeps with the stance that the Aussie economy is at a “gentle turning point” despite sluggish readings in the NAB Conditions and Westpac Consumer Sentiment surveys as of late.

Overall, market reactions from the prior three releases have been fairly contained, and so, it’s likely we see similar ranges today in AUDUSD. Markets are currently implying a 41% probability that the RBA undergo a 25bps rate cut in November. The more important release will be Aussie employment data on Thursday at 11.30am AEDT. 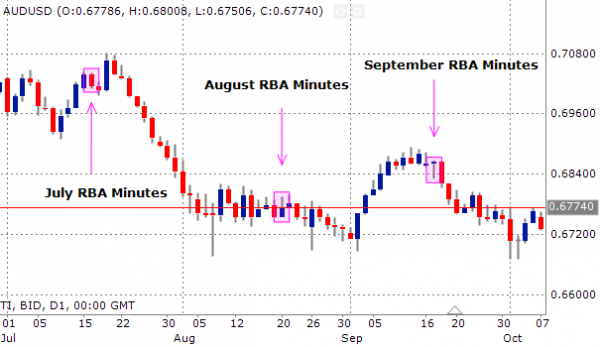 Elsewhere, markets catch Chinese CPI y/y due out at 12.30pm AEDT with consensus of 2.9% and the prior month coming in slightly lower around 2.8%. The primary focus however on broader developments concerning US/China trade, as well as, China’s GDP numbers which come out on Friday at 1.00pm AEDT, should mean it’s unlikely we see significant trading on the print. Instead, how China’s GDP figures print will be of far more interest for PBOC policy implications given it’s close to the PBOC’s lower bound of 6% and September industrial production printed weak.

BoJ Governor Kuroda also gets some radio time due to speak at 11.30am AEDT. Traders should remain wary around his comments and whether any fresh guidance gets issue, though it’s not expected. USDJPY positioning is looking more neutral having been moderately long last week.