It will be a significant day in the history of the Eurozone on October 31 when Mario Draghi – widely viewed as the man who saved the euro – will step down as President of the European Central Bank. He will be replaced by former IMF Managing Director Christine Lagarde, making her not only the first woman to head the ECB but also the first time that the Bank will be led by someone who is a former lawyer and politician rather than a trained economist. However, her arguable credentials might be the least of her problems as a rift is widening within the Governing Council about the appropriate path of monetary policy.

Lagarde will take her post on November 1 – the same day as the ECB will resume asset purchases following the controversial decision at the September meeting to restart the programme and to lower the deposit rate deeper into negative territory. The Bank’s decision was communicated well in advance, and while the package was much more aggressive than what some had anticipated, the announcement was broadly in line with what investors had been expecting. 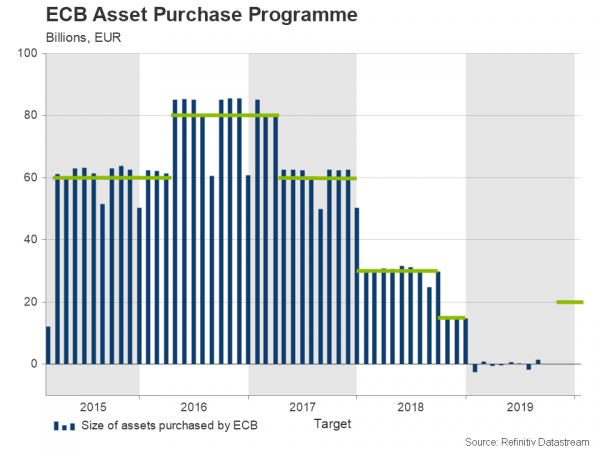 What did take markets by surprise, however, was the strong hostility by some Governing Council members against a resumption of the asset purchase programme. As expected, the traditionally hawkish German central bank chief, Jens Weidmann, opposed the move. He was joined by his French, Dutch, Austrian and Estonian counterparts in dissenting. But the opposition didn’t end with the national central bank heads. Two members of the Executive Board also disagreed with Draghi’s stimulus plan, with one of them, Sabine Lautenschlager, being so against it she later decided to resign from the board.

Draghi’s push for another dose of big stimulus also attracted criticism because it went against the recommendation of the Bank’s Monetary Policy Committee, which advises the Governing Council on policy.

So where does all this leave the ECB going forward? One thing’s for certain, incoming president Christine Lagarde will have quite a task ahead of her in trying to unify a divided Governing Council. But given that the ECB won’t be looking to ease again so soon after September’s sizeable package, the immediate ramifications might not be so clear.

The Eurozone economy is still struggling, particularly Germany’s, and inflation continues to moderate – it hit a near three-year low of 0.8% in September. Add to that the gloomy outlook for the global economy amid heightened trade and geopolitical tensions, it would be premature to assume further monetary easing won’t be required. 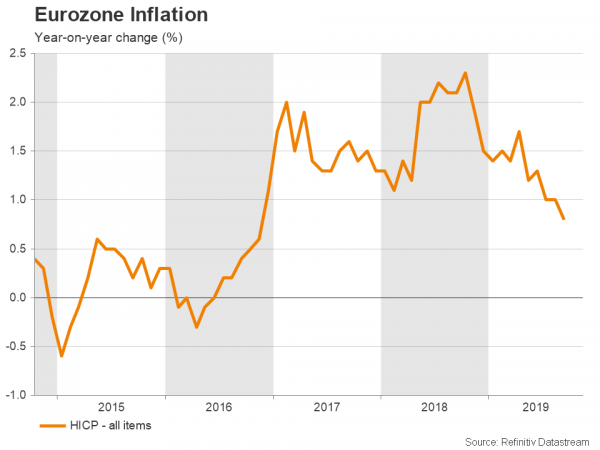 But the fierce opposition to still looser policy by France and Germany – the Eurozone’s biggest member states – makes additional stimulus more difficult. The public and vocal disagreement among policymakers risks undermining the ECB’s credibility and the effectiveness of its policy decisions. That’s not to say the hawks won’t support more stimulus in an emergency response such as a no-deal Brexit, but they could intensify their opposition should the rest of the Governing Council be in favour of further easing mainly as a pre-emptive move.

If it comes to that, the doves would likely win. The minutes of the September meeting minutes noted there was a “clear majority” of members who agreed with the plan to restart asset purchases and lower the deposit rate to a record low of -0.50%. Politically, however, it would be highly sensitive for the ECB’s president to press for additional stimulus and risk drawing more public criticism from both within the Governing Council and from politicians across the bloc.

Has the euro slide found a floor?

The diminished likelihood of more stimulus could be one factor that’s been aiding the euro to claw higher and recover from 2½-year lows touched at the beginning of October. The single currency has been on a steady but persistent downtrend since April 2018 – consistently slipping to fresh lows just as it appeared to be turning the corner. Although it’s too early to judge whether the euro has bottomed out for good this time, the rebound could turn more sustainable if it becomes apparent that we’ve seen the last of the policy easing by the ECB for the foreseeable future.

Some analysts have also cited the ECB’s decision to introduce a tiered system for the deposit rate as a factor in limiting the euro’s downside because it, in effect, acts like a rate hike, making it more attractive for national central banks to park some of their excess cash at the ECB.

If the euro’s current trend continues, a break of the 50% Fibonacci of the June-October downleg at $1.1145 looks imminent. Should it manage to extend its gains, the 61.8% Fibonacci at $1.1208 would come within reach, putting the uptrend on a stronger footing.

But perhaps a safer bet for a euro rally isn’t the scenario of the ECB being done with easing but one where Eurozone governments loosen the purse strings. There are signs that sentiment is shifting in the bloc in favour of looser fiscal policy and even German politicians appear to be coming round to the idea. There’s also some hope that Lagarde can be more successful than Draghi was in convincing European Union leaders to ease up on strict euro area spending rules and speed up on structural reforms.

Lagarde might not be an economist but she will be bringing with her first-grade diplomatic and negotiating skills that can help her exert influence on Eurozone capitals. A changing tide in support of fiscal stimulus that sees member states splash out on tax cuts and infrastructure projects could be the death nail in the euro’s long-drawn-out downtrend.

Too little, too late?

Unfortunately, though, doing too little too late is an all too familiar theme with the Eurozone so investors shouldn’t get their hopes up of a speedy response or anything too extravagant should there be consensus for a spending spree. This would leave the euro exposed to further selloffs, leaving the door wide open for a slide below the October low of $1.0877 and a test of the $1.08 handle. 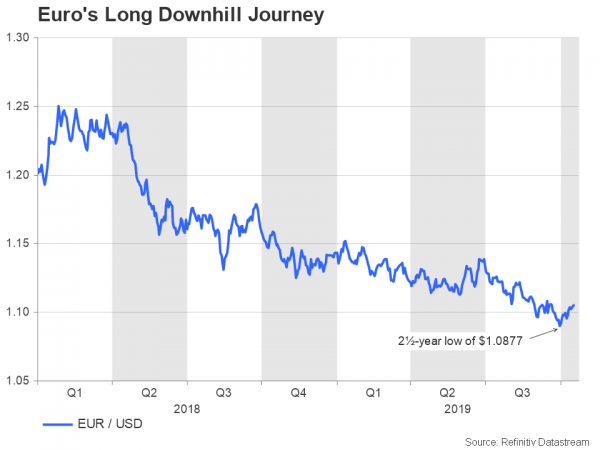 In the event that a fiscal boost is not forthcoming or falls well short of expectations, the risks for the euro would remain clearly tilted to the downside, especially as Lagarde herself has demonstrated to be supportive of Draghi’s aggressive ‘big guns’ policy approach. Hence, Lagarde is unlikely to signal a policy shift publicly even if she was to concede privately that it would be very challenging to find strong backing for additional stimulus.

Of course, it’s well possible policymakers could be let off the hook if the United Kingdom and the EU finally manage to reach a Brexit deal that can get through the British Parliament and trade tensions with the United States don’t worsen and even de-escalate (whether it be with China or with the EU). While positive developments on the trade and Brexit front would significantly lessen the need for greater accommodative policy, it would leave the question open of how far a euro rebound can stretch without vital structural reforms and some degree of a fiscal boost.