The pound slipped against the USD from the 5-month high it had reached on Friday, as a delay in the Brexit vote of the UK Parliament disappointed investors. The UK Parliament voted for a delay of the vote for the Brexit agreement achieved by UK’s PM Boris Johnson, by 322-306. The UK PM sent a rather reluctant letter to the EU requesting a delay, accompanied by a second, which states the disagreement of the UK PM’s for a delay. David Gove minister of the UK government stated that “the letter was sent because parliament required it to be sent” and that the UK will be leaving the EU by the 31st of October. It should be noted that the UK Parliament is expected to have a vote this week, as the withdrawal agreement is to be presented. The developments over the weekend, may have reduced the market’s anxiety about a hard Brexit, as the pound maintained most of last week’s gains. We expect the pound to remain Brexit oriented for the coming week and volatility could remain at high levels. GBP/USD rose on Friday, breaking the 1.2885 (S1) resistance line, now turned to support. We maintain the bullish outlook for the pair as long as the upward trendline, incepted since the 11th of the month, remains intact. Should the prementioned trendline be broken, we would switch our view in favour of a sideways motion. Should the pair find fresh buying orders along its path, we could see it aiming if not breaking the 1.3015 (R1) resistance line. Should the pair come under the selling interest of the market, we could see it breaking the 1.2885 (S1) support line and aim for the 1.2760 (S2) support level.

The Aussie maintained its strength against the USD, as markets seem to preserve their optimism about a number of commodity currencies. In contrast to the Fed, which the market expects to cut rates, RBA is expected to remain on hold according to AUD OIS. The central bank differentials seem to be maintained for the RBA also against the RBNZ, which is also expected to cut rates. It should be noted that the favorable Australian employment data released last week, seemed to solidify the market’s expectations about the RBA. On the flip side it should be noted that the IMF lowered its expectations for China’s growth in 2020, which could have an adverse effect on the AUD. We could see the Aussie remaining data dependent, albeit fundamental issues such as the US-Sino trade tensions could influence its’ direction. AUD/USD maintained an upside motion yesterday and during todays’ Asian session hesitantly broke the 0.6860 (S1) support line. We maintain a bullish outlook for the pair’s direction as long as upward trendline incepted since the 16th of the month, remains intact. Please note though that the RSI indicator in the 4-hour chart, has surpassed the reading of 70, implying a rather overcrowded long position for the pair. Should the bulls maintain control over the pair’s direction, we could see it aiming for the 0.6910 (R1) resistance line. Should the bears take over, we could see the pair, breaking the 0.6860 (S1) support line and aim for the 0.6800 (S2) support level.
Other economic highlights today and early tomorrow

In today’s European session, we get Germany’s PPI rates for September. As for speakers, BoE’s Andy Haldane is scheduled to speak today. Also please bear in mind that Canada will be holding a federal election today. 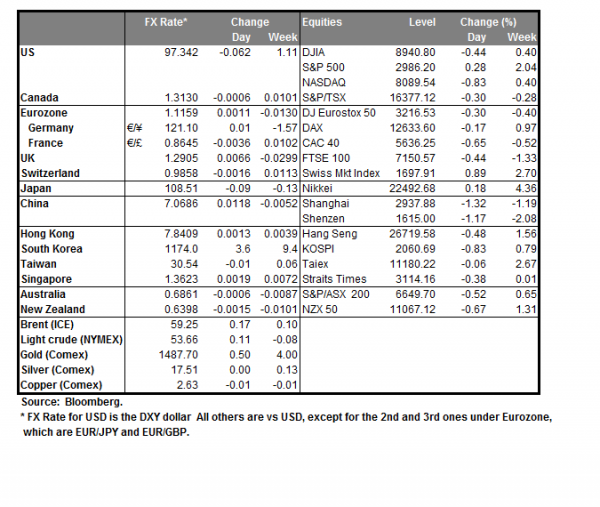