A strong finish to equity markets on Friday combined with a light Monday calendar should see risk sentiment supported as the week gets underway. We flag some positive weekend headlines around US-China trade that suggests Trump’s “substantial phase one deal” is heading in the right direction, though, still recognise the difficulty in eliminating persistent trade policy uncertainty as we described in our “US-China Playbook: Where To From Here?” report. The question remains, especially for us, whether the phase one deal can be properly translated, rigorously enforced and signed by Trump and Xi before the close of the APEC Chile Summit on Nov 16-17. And will it be enough to achieve meaningful progress on one of the most expensive and longest trade wars to date.

ASX 200 Futures rallied to 6,739 after a phone call between Chinese VP Liu He, USTR’s Lighthizer and US Treasury Secretary Mnuchin led to reports that some sections of the phase one deal were close to being finalised and the latter two could head to China in early November for more intimate talks. ASX Cash as a result looks set to climb +24pts at the open.

The 4th Annual Plenum of China’s Central Committee which includes up to 300 full and alternate members will run for four days starting from Monday. The Plenum, an important platform that strengthens the leadership of the ruling Chinese Communist Party, is expected to deliver economic, governance and social policy reform that builds on the agenda set in the Political Report of the 19th Party Congress.

Plenum soundbites released through the week and focussed on economic and reform issues will serve as a closely monitored backdrop to ongoing US-China trade talks in the foreground. USDCNH currently trades below the neckline of a slanted H&S pattern detailed in our report “FX: USDCNH Looks Technically Bearish” having fallen 20pips late last week. We remain bearish in the near-term given the recent lull of negative US-China trade headlines. 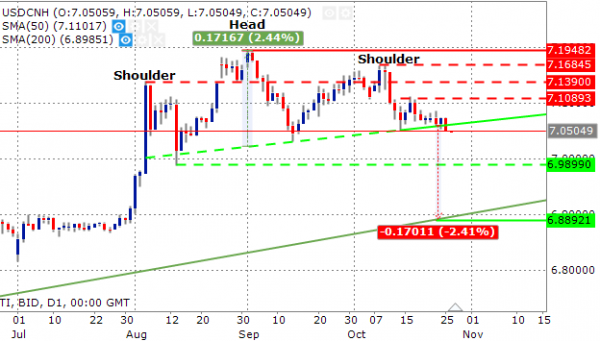 Antipodean FX up ahead

A solid risk rally in Aussie equities wasn’t met with the same enthusiasm across the FX complex. AUDUSD finished at 0.6822 having fallen from Oct. highs of 0.688 and pulled away from the 0.6889 neckline of a possible multi-month double bottom formation. Fundamentals in the commodity endowed country however remain firm despite the bearish move. In terms of this week, local dynamics will look to take stock of key data points with RBA Gov. Lowe speaking in Canberra on Tuesday at 5.45pm AEDT, quarterly CPI inflation on Wednesday at 11.30am AEDT and Aussie building approvals m/m out Thursday at 11.30am AEDT.

We expect slightly lower liquidity in the NZDUSD book with a bank holiday taking place across the Tasman in New Zealand. Long positioning remains marginally more upbeat in AUD vs NZD and could give rise to higher AUDNZD, especially having bounced from 1.066 mid-week. Month-end re-balancing also makes for an interesting dynamic with USD expected to be broadly net sold.