Just When We Thought the U.K. Was Out…

Last week, we released a Brexit update in which we predicted that the Withdrawal Agreement Bill (WAB) would be approved in short order. In retrospect, we were too optimistic on the prospects for the WAB to be approved in such a short timeframe, and we are instead now staring down a likely U.K. general election in early December (9th or 12th) ahead of a new Brexit deadline on January 31, 2020. Before we discuss the possible outcomes for the election, we first want to emphasize an important point: all options remain on the table for Brexit at this point (no-deal Brexit, the U.K. leaving the E.U. with a deal, and no Brexit at all). The only way to take a no-deal Brexit off the table is for the U.K. to leave the E.U. with a deal, or for the U.K. to revoke Article 50 and cancel Brexit altogether.

The current state of polling around a possible U.K. general election suggests that if the election were held today, the Conservative Party would win by a wide margin and probably secure an outright majority in parliament (Figure 1). We would argue that markets are also pricing this outcome, given today’s relatively positive U.K. financial and currency market reaction. 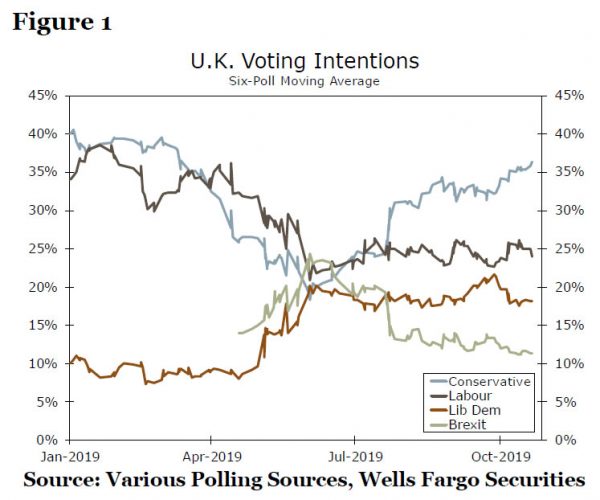 Why would a victory for Boris Johnson’s Conservatives be a positive for U.K. financial markets and the British pound? The narrative goes something along the lines of: Conservatives win a majority, ratify the WAB, the U.K. leaves the E.U. with a deal and moves on to longer-term trade talks. There are few if any certainties when it comes to the Brexit process, but we can say with a reasonable degree of confidence that if the Conservatives win an outright majority, they will be able to ratify the WAB and leave the E.U. with a deal. This is the scenario we currently view as the most likely, and is our baseline assumption.

Scenario 2: A Labour of Love

Despite the fact that the Conservatives currently hold a comfortable lead on their political opponents, party members are likely to be anything but comfortable with the prospects for a shift in the polls in the coming weeks. Just over two years ago, former Prime Minister Theresa May called for early elections as the polls suggested her Conservatives would gain a larger majority in Parliament, only to see her lead evaporate in the polls in the weeks leading into the election. In the end, the Conservatives lost their majority entirely, and we suspect party members have that episode in mind as the U.K. moves closer to early general elections. It is still our base case that Boris Johnson will navigate the campaign process and secure a Conservative majority in Parliament, but what if he does not? How else could the election results shake out?

A potential alternative scenario is one in which the Labour Party ends up governing in a coalition with other left-leaning parties, including the Liberal Democrats and the Scottish National Party (SNP). A governing coalition of this varietal could look to push for a “softer” approach to Brexit, or work to cancel Brexit entirely. Such optimism around a Labour-led coalition may be misplaced, however, or at least overly presumptuous. It is entirely possible that a Labour-led coalition could work with the European Union on a new Brexit deal that seeks to keep the United Kingdom in the E.U. customs union after Brexit, avoiding new tariffs and maintaining similar or the same economic relationship between the E.U. and U.K. that currently exists. And it is possible that such a government could call for a second referendum, offering U.K. citizens a choice between leaving the E.U. with a deal and remaining in the European Union. Either of those scenarios would likely be more positive for the U.K. economy and financial markets than our baseline assumption.

Our concern, however, is that a Labour-led coalition could simply dither and fail to agree on a path forward for Brexit. Our sense is that there is no consensus within the Labour Party on a Brexit strategy, never mind between Labour and the Liberal Democrats or the SNP. Some may want to seek a deal that keeps the U.K. in the E.U. customs union, while others may want to revoke Article 50 and reverse Brexit entirely. Unable to agree on how to proceed, the U.K. may then stumble toward the new January 31 Brexit deadline with no plan in place, having to seek yet another extension from the European Union. We worry that at some point, the European Union may be less willing to grant extensions, and the risk of a no-deal Brexit could become more of a concern. This “gridlock” scenario would only serve to weigh further on the U.K. economy and markets. As an additional caveat, we acknowledge that a government led by Labour leader Jeremy Corbyn, who favors policies such as nationalization of key industries and higher corporate taxes, could be a longer-term negative for the U.K. economy and financial markets. That said, Corbyn’s policy agenda would likely be curtailed by Labour’s coalition partners.

To be clear, the aforementioned “gridlock” scenario is a significant risk, and there is more than one route to get there. Indeed, there could be a minority government, perhaps led by the Conservatives, that is unable to pass the WAB, or it is possible that no government at all can be formed following the December election. No matter how we get there, further gridlock is a clear and present risk for the U.K. economy and financial markets. For now, however, our baseline assumption is that Boris Johnson will secure a majority in the December elections and pass the WAB, setting the stage for longer E.U.-U.K. trade talks starting in 2020.

Sterling Inches Higher To 1.2643, But Gives Back Gains

British Pound Trading On A Negative Footing This Morning

Market Morning Briefing: Dollar-Yen Has Fallen Along With The Dip In Dollar Index