The U.S. economic calendar was packed this week with several major data releases that gave a glimpse into the state of economic activity heading into the last quarter of the year. Kicking things off, the U.S. economy grew at a 1.9% annualized pace last quarter, slowing marginally from 2% recorded in the second quarter (Chart 1). Sectors centered on the domestic side of the economy, including consumer spending (+2.9%), residential investment (+5.1%), and government spending (+2%), all made positive contributions.

Other big entries did not fare as well. Most notably, business investment declined for the second straight quarter (-3%), while net exports and inventories were minor drags. The falloff in business spending is the worst performance since late 2015, reflecting a confluence of factors ranging from slowing global growth, rising trade protectionism, and elevated policy uncertainty to appreciation of the U.S. currency. On the flipside, residential investment, having declined for six consecutive quarters, finally returned to positive territory, spurred by falling interest rates and high demand for homes.

The consumer was once again the main driver of growth, and that bodes well for the economy if employers keep creating jobs and income growth remains steady. On the jobs side, the U.S. economy continues to surprise to the upside with non-farm payrolls rising by a healthy 128k in October, while job gains were revised upwards in the two prior months. However, a higher participation rate acted to induce a minor uptick in the unemployment rate to 3.6%. Overall, the labor market seems to be holding its own, even as the expansion cools. On the income side, average hourly earnings rose a decent 0.2% month-on-month in October (3% year-on-year). Other data releases showed that personal income advanced by 0.3% in September m/m, cooling from a 0.5% gain in August. Disposable income growth also slowed in September, weakening from 0.6% to 0.3%.

The headline PCE price index rose 1.3% y/y in September, while the core measure, the Fed’s preferred inflation gauge, was up 1.7% – well below its 2% target (Chart 2). This allowed the Fed ample room to implement its third consecutive quarter point cut, lowering the fed funds target range to 1.50%-1.75%. Although some easing bias remains, the accompanying policy statement signaled a higher bar for future interest rate reductions. The two previous cuts appear to be paying off by giving a lift to household spending in the most interest rate sensitive areas, such as housing and autos. This outcome has helped to offset a slump in manufacturing. Encouragingly, that slump eased a bit in October, with the ISM manufacturing sentiment index ticking up to 48.3 from 47.8 in September.

Across the pond, Britain not only got a Brexit extension but also an early election. The Brexit deadline was extended to Jan. 31, while British lawmakers voted to hold a December 12th election. This paves the way for one of the most unpredictable and divisive national ballots in Britain, but inches the Brexit issue closer to resolution.

Overall, it appears a healthy jobs market, supported by monetary easing is keeping Americans spending (though with less gusto than before), and helping to make up for a shortfall in business investment. 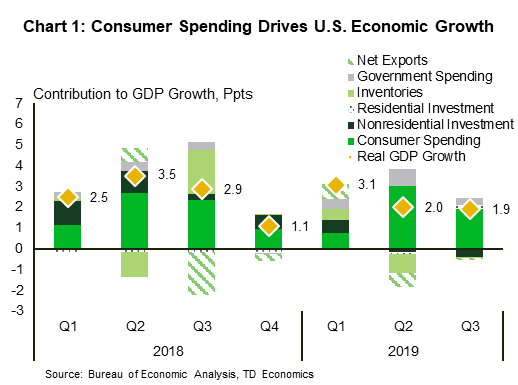 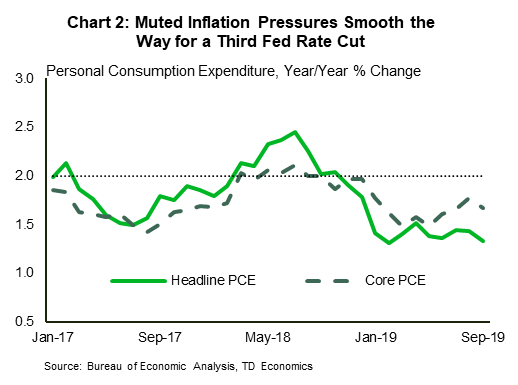 During this Halloween week, investors were “treated” to a bevy of data releases, both primary and second-tier. However, the marquee event was the Bank of Canada’s interest rate decision. In no mood to “trick” investors, policymakers left the overnight rate unchanged at 1.75%, as was widely anticipated. However, plenty of scares were delivered in the accompanying statement. The tone shifted decidedly dovish compared to September, leaving the door open for eventual interest rate cuts.

Trade conflicts and uncertainty featured prominently in the Bank’s statement. Updated forecasts showed that economic growth was expected to be weak in the second half of 2019, dragged down (in their view) by falling investment and exports. Moreover, policymakers are now expecting growth to be weaker in coming years (Chart 1). Indeed, their growth forecasts have now been pushed down by 0.2 ppts in both 2020 and 2021, bringing them closer to our own projections.

The Bank expects the resilience of the Canadian economy to be “increasingly tested” by these challenges, and plans to pay close attention to indicators of consumer spending and housing activity for signs that weakness is spreading to the broader economy. Resilience seemed to be somewhat of a theme with policymakers this time around, with a variation of the word coming up five times in the Monetary Policy Report (compared to zero mentions in July). Coincidentally, resilient is also a pretty good word to describe this week’s slate of data releases.

The August real GDP report was the most important data release of the week. On the face of it, the report was disappointing, with only a modest 0.1% m/m gain churned out. Services sector output growth was mild owing to a sharp decline in wholesale trade. However, the headline masked better details, as 14 of 20 major industry groups saw higher output (Chart 2). And, absent a drag from utilities output that was a result of colder weather growth would have come in at a trend-like 0.2% rate. Overall, the report leaves us tracking a 1.2% annualized gain for the third quarter, nearly in-line with the Bank of Canada’s estimate.

Other, second-tier data releases also suggested some resilience on the part of Canada’s economy. For instance, the lagged (but less volatile) Survey of Employment, Payrolls and Hours showed that payroll employment experienced a mild decline in August. However, this followed an absolute blow-out month in July, where the 2nd most jobs were created (82k) in the post-recession era. What’s more, wages accelerated during the month, consistent with the strong growth recorded in the Labour Force Survey.

Events this week clearly signaled that the Bank stands ready to lower interest rates should the need arise. In addition to weaker-than-expected economic growth, one development that could spur a move lower would be a sharp tightening in global financial conditions. And, while conditions appear accommodative on a global basis, bond yields have come off their lows in both the U.S. and Canada in recent weeks. If sustained, this would be a powerful motivator to push the Bank from talk to action. 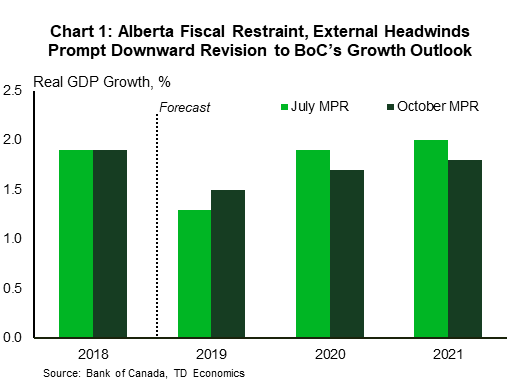 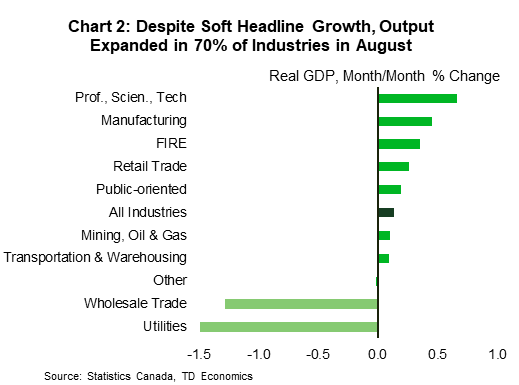 We look for a modest rebound in the ISM non-manufacturing index to 53.7 following the drop to a three-year low in September. We expect the services sector to have improved in October on the back of a solid US consumer. Service sector surveys suggest small gains during the month, while consumer spending has continued to prove resilient. 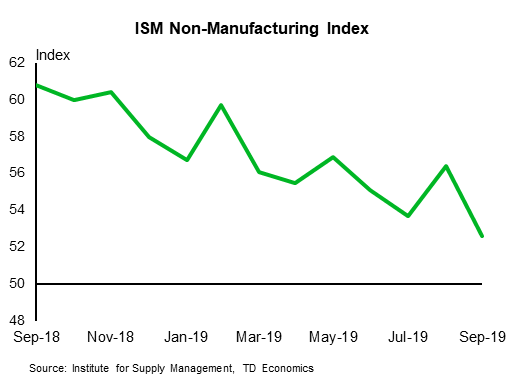 TD looks for the trade deficit to narrow to $600m in September from $960m on account of a pullback in import activity, partially offset by softer exports. The UAW strike and resulting lockouts in the Canadian auto sector will weigh modestly on motor vehicle exports; US workers did not walk off the job until September 16th, and Canadian factories were able to operate for a few days before a parts shortage took hold. However, export volumes should see a more modest decline owing to a 0.1% decline in factory prices. 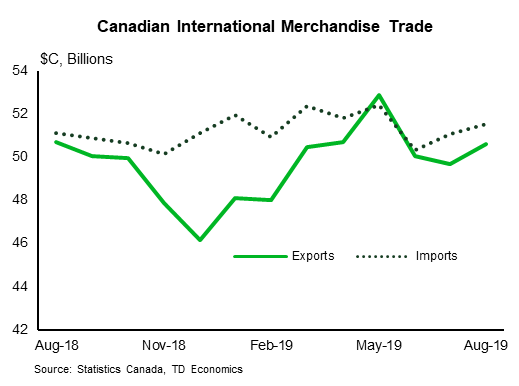 TD looks for the labour market to continue its hot streak with the creation of another 25k jobs in October, which should allow the unemployment rate to slip back to the post-crisis low of 5.4%. With over 130k jobs created in the last two months, we would typically look for some giveback but expect hiring for the federal election to offset any weakness. Public administration employment has risen by 32k on average during the month of the last three federal elections, although a 21k increase in PA employment over the last four months suggests we could see more modest gains this cycle due to wider usage of early voting. Looking past the election-related hiring we expect a modest unwind of recent gains, with health care and education expected to give back a portion of the 70k jobs created over the last two months. We also expect a slight improvement in earnings which should push wage growth to 4.4% y/y on muted base effects. 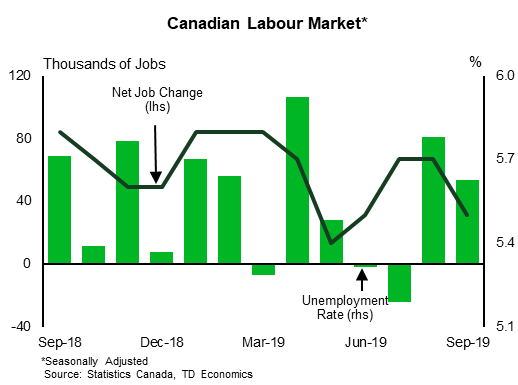 Housing starts are forecast to pick up to a 229k annualized pace in October on stronger single and multi-unit construction. Single family starts fell by nearly 10% in September on a sharp drop in the Toronto region (among others), which we expect to rebound given solid demand in the resale market, and single-family permit issuance currently sits at a 14-month high. Multi-unit starts should also see a slight increase. Overall, this print should bode well for the residential investment outlook. Residential investment rebounded from five quarters of contraction with a 5.5% (ann.) increase in Q2, and we are tracking a slightly firmer gain for Q3. With starts averaging 223k for both of those quarters, a modest increase for October would suggest sustained momentum into Q4.. 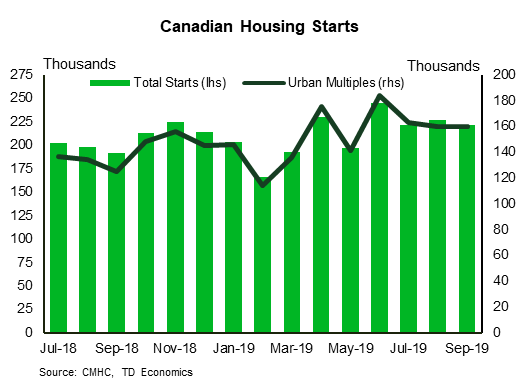