The BoE, in its latest monetary policy meeting, kept its key interest rate unchanged at 0.75%. However, two policymakers voted for a rate cut while other members were of the opinion to lower interest rates only if global and Brexit tensions do not ease. In a statement post-meeting, the BoE Governor Mark Carney signalled that a rate cut would be considered, if global and Brexit tensions do not ease. Further, he indicated that the British Prime Minister, Boris Johnson’s new Brexit deal has helped to reduce some uncertainty and added that business investment could pick up.

Data showed that the Halifax house price index unexpectedly eased 0.1% on a monthly basis in October, compared to a drop of 0.4% in the previous month.

In the Asian session, at GMT0400, the pair is trading at 1.2815, with the GBP trading a tad higher against the USD from yesterday’s close.

Looking ahead, investors would keep an eye on UK’s trade balance data, industrial production, manufacturing production and gross domestic product, all set to release next week. 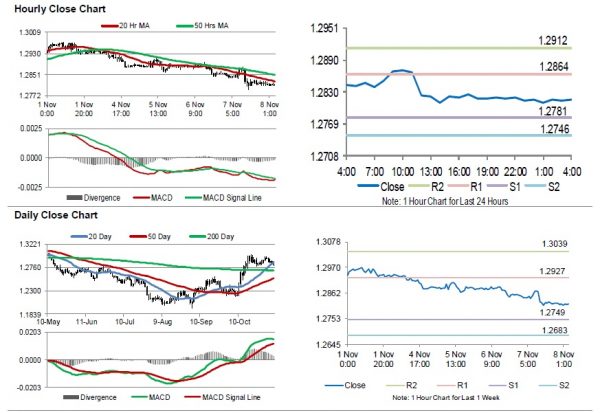