Safe havens retreated yesterday, as positive headlines about the US-Sino relationships arose. Media, reported that China and the US have agreed to roll back tariffs on each other’s goods should an interim deal be reached. Specifically, the Chinese Commerce Ministry stated that the two sides had agreed to cancel tariffs in phases, while US officials seem to confirm the rollback as part of a “phase 1” deal, however no official deal exists yet. White House spokeswoman Grisham, stated to media that she is “very, very optimistic” about the possibility of a partial deal. On the flip side, it should be noted that Reuters reported that the plan may face stiff internal opposition and also, please note that the actual signing of the partial deal, is being probably delayed. Should there be further positive headlines about the issue we could see safe-havens weaken further and vice versa. Gold prices tumbled yesterday breaking the 1482 (R1) support line (now turned to resistance and tested the 1468 (S1) support line. Consecutive drops of the precious metal’s prices in the past two days predispose us of a bearish outlook. The RSI indicator in the 4-hour chart, is at the reading of 30, which confirms the dominance of the bears, yet at the same time could imply that the short position for gold may be overcrowded. Should gold remain under the selling interest of the market, we could see the its prices breaking the 1468 (S1) support line and aim for the 1453 (S2) support level. On the flip side should the gold’s long positions be favoured by the market, we could see the precious metal’s prices breaking the 1482 (R1) resistance line, aiming for higher grounds.

… while the BoE Interest rate decision weakens the pound…

BoE decided to remain on hold yesterday, keeping rates unchanged at +0.75%, as was widely expected. The decision though was accompanied by a dovish tilt, which may have taken the markets by surprise as the release weakened the pound. In its forecasts, the bank included a substantial downgrade to the growth and inflation outlook of the UK economy for 2019 and the next two years. It would be interesting that in its forward guidance, the bank switched the certainty characterizing prior decisions about “increases in interest rates at a gradual pace and limited extent” with the new wording that rate hikes “might be needed”. Also the market was surprised to see two MPC members (Saunders and Haskel) dissenting and voting in favor of a rate cut. Despite a near term cut seeming remote, we tend to note that the dovish shift is fundamental to the stance of the BoE, could weigh on the pound. Never the less the pound seems to remain Brexit driven yet the uncertainty surrounding it, just widened by the decision. Cable dropped by the interest rate decision retreating by around 44 pips upon release. We maintain a bearish outlook for the pair, as the downward trendline incepted since the 1st of November, seems to continue to dominate its prices. Should the bears dictate the pair’s direction, we could see it aiming if not breaking the 108.35 (S1) support line. On the other hand, should the bulls be in charge once again of the pair’s direction, we could see the pair breaking the 109.00 (R1) resistance line and aim for the 109.70 (R2) resistance level.

Today during the European session, we get Germany’s trade data for September. In the American session, we get Canada’s employment data for October and from the US the U.Michigan preliminary consumer sentiment for November and the Baker Hughes active oil rig count for the past week. Tomorrow, Saturday, early in the morning, we get China’s inflation rates for October, while on Monday’s Asian session, we get Japan’s current account balance for September and core machinery orders growth rates for also for September. Please note that European Commission President Ursula von der Leyen speaks about the situation in Europe tonight, while Fed’s Lael Brainard and New York Fed President Williams are scheduled to speak on Saturday morning. 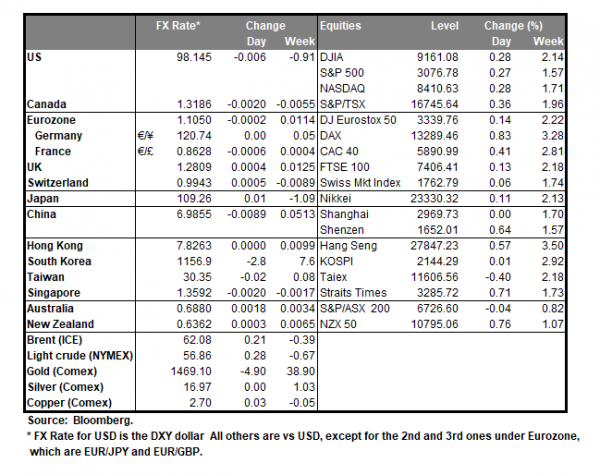 GBP/USD At Key 1.3000 Before Employment Data