Note that China Weekly Letter will not be published next week, as I will be travelling in China.

This week provided further optimism that the trade war has peaked and a phase one deal is in the pipeline – a deal that could include a roll-back of some tariffs. China’s spokesman from the Ministry of Commerce said on Thursday that ‘in the past two weeks, top negotiators had serious, constructive discussions and agreed to remove the additional tariffs in phases as progress is made on the agreement’. Both sides agreed to reduce tariffs proportionately and at the same time in different tranches as sequential deals are struck. China is pushing the US to cancel the tariff increase in December and remove the 15% tariff rate imposed on 1 September on Chinese goods worth USD125bn. According to Reuters China also aims for relief from 25% tariffs put on goods worth USD250bn. White House spokesperson Stephanie Grisham told Fox News on Thursday the US is “very, very optimistic” about completing a trade deal.

The timing of a phase one deal is uncertain and according to a US official it may stretch into December. The location is also not agreed upon and a dozen places have been aired ranging from Iowa, Alaska and Hawaii to London, Sweden and Switzerland. The signing spot may depend on when a deal is ready, as it could take place in connection with other travel by the two presidents of US and China.

A few things happening on the Chinese side should help soothe the atmosphere for the continued trade talks: this week nine Fentanyl smugglers were jailed in a landmark US-China cooperation. The crackdown on opioid shipping from China to the US was part of the first ceasefire deal made between Xi and Trump at the G20 meeting in December 2018. In August, however, Trump accused China of delaying action on this. Another positive thing happening was a Chinese removal of curbs on US poultry imports.

Comment. We look for a phase one deal to be signed in late November or early December and expect it to include a roll-back of the 1 September 15% tariff hike on USD125bn of goods. A deal will also include China buying more agricultural goods, which we suspect Trump is quite anxious to get started as US farmers are hurting badly from the trade war, and farmers are key in the political swing states Ohio, Iowa and Wisconsin. It will still be a tough deal to make, though, and we should be prepared for potential set-backs on the way. China has some leverage due to the weakening US economy that will increasingly hurt Trump’s re-election platform. On the other hand, China also wants a solution to the trade war in order to slow down the pace of companies that are leaving China for production in other countries. So the two sides should be able to land a phase one deal.

Stocks and the CNY rally, we revise our USD/CNY forecast

The Chinese stock market (chart 2) rallied in tandem with global equity markets this week as the news on trade lifted sentiment. It puts the annual gain for the CSI300 index at 33% making it one of the best performing markets this year. A roll-back of tariffs would be a strong signal that the trade war has peaked in intensity and thus that the probability of a worse-case scenario with full blown escalation is significantly lower now. As the optimistic tone to the trade talks happens alongside numerous indications that the global cycle has bottomed, it leads investors to get off the fence and move money back into the stock market. In addition, this year Chinese stocks have been favoured by more inflows related to the inclusion in the MSCI index and the scrapping of investment limits in the so-called QFII programme for foreign investors.

USD/CNY took a further slide lower (stronger CNY) in response to the recent positive signals. After peaking close to 7.20 at the height of the trade war in early September, the cross pushed through the 7.00 level this week (chart 1). 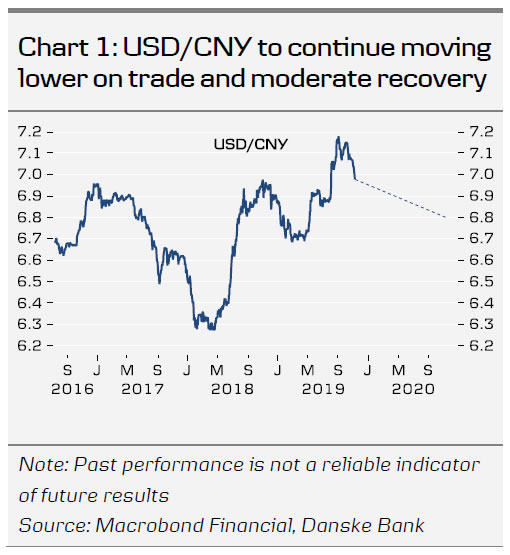 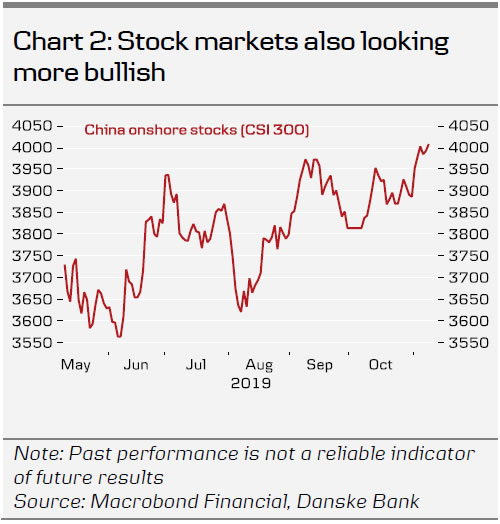 Comment. We believe the Chinese stock market has more upside. Although some of the good news is already priced in, we look for a further rally when markets get more confirmation of a phase one deal and when a moderate recovery unfolds in 2020. Stock markets normally perform when the cycle is turning higher (chart 3). 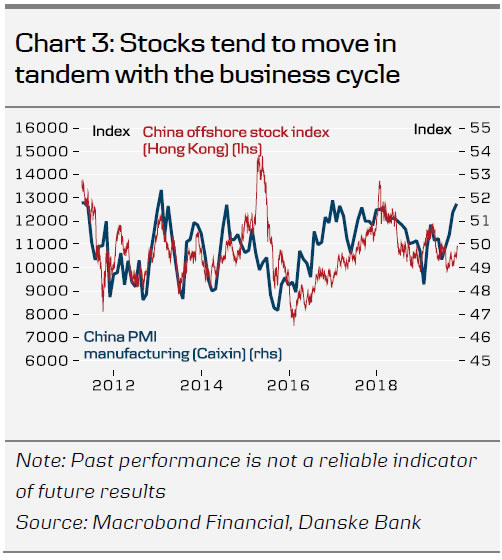 We revise down our USD/CNY forecast to 6.8 in 12 months from 7.0 previously. The momentum in the cross has been stronger than we expected, and we believe the CNY will get more tailwind in 2020 when the economy recovers further. We also see limited risk of a renewed flare up in the trade war at a time when Trump will be working to get the strongest possible economy heading into the November election. Instead, we see a 50-50 chance that the US and China can agree on a phase two deal at some point during the year.

This week China got a win on two fronts in Asia. First, the US sent a downgraded delegation for Asia-Pacific summits over the weekend, leaving the stage free for China to set the agenda. While Trump sent his National Security Adviser and Commerce Secretary for the most important annual meetings in Asia, China was represented by Premier Li Keqiang. Japanese Prime Minister Shinzo Abe also showed up. Second, China is on the way to signing a free-trade agreement with 14 other nations in Asia, the so-called Regional Comprehensive Economic Partnership (RCEP). The nations moved an important step closer to finishing a trade deal that has received little attention, but which will cover half the world’s population (if obstacles to include India can be solved). The meetings in Bangkok resulted in declarations from the participating countries excluding India, that a deal would be signed in 2020. China said it would work to solve the issues for India, which is afraid of being flooded by cheap Chinese goods.

Comment. The free trade agreement is an important signal for China and the Asian countries that it is against protectionism and unilateralism and pro freer trade and multilateralism. Many Asian nations worry that they will be the next targets of Trump tariffs once the trade war with China is solved and have been keen to secure a good trading relationship with China, which is the biggest export market for most of these countries (chart 4). 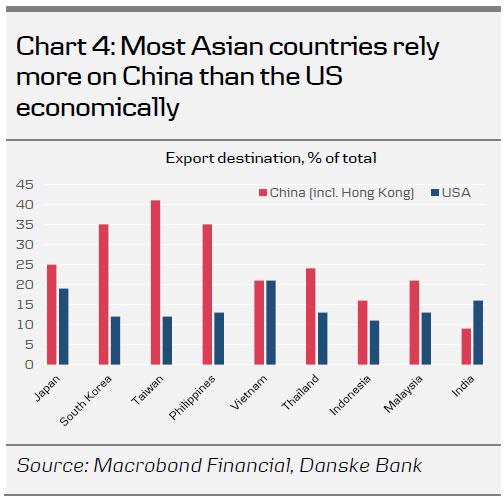