The Kiwi weakened against the USD, ahead of the release of RBNZ’s interest rate decision, tomorrow during the Asian session (01:00, GMT). Currently NZD OIS imply a probability of 80% for the bank to cut rates by 25 basis points reaching +0.75%, with the rest favouring the bank to remain on hold. The uncertainty of the markets about the decision seems to have lowered somewhat and the recent weak employment data as well as the retreat of inflation for Q3 seem to support the idea of the bank lowering rates, which is also our main scenario. Should the bank actually cut rates we could see the Kiwi weakening, yet should there be a hawkish accompanying statement, we could see the market’s reaction reversing and providing support for the NZD, despite the cut. On the other hand, the bank may opt to maintain a wait and see position in the light of the recent positive developments regarding the US-Sino relationships and remain on hold. In such a case we could see the Kiwi rallying as the decision could cause an asymmetrical reaction from the market’s surprise. NZD/USD dropped during the Asian session today, breaking the 0.6340 (R1) support line, now turned to resistance. We could see the pair waiting for RBNZ’s interest rate decision to provide direction. Should the pair remain under the selling interest of the market, we could see it aiming if not breaking the 0.6300 (S1) support line and continue to aim for lower grounds. Should the pair’s long positions be favoured by the market, we could see NZD/USD breaking the 0.6340 (R1) and aim for the 0.6390 (R2) resistance level.

… while the pound strengthens as Johnson gets a boost…

The pound strengthened yesterday, as news came out that the Brexit Party would be standing down where seats were won by Conservatives in the 2017 elections. Instead the party seems to intend to take on anti-Brexit parties and/or soft Brexit Parties and politicians. The move according to political analysts tends to reduce the risk of a hung Parliament and could provide support for the Conservative government. Also, should there be a wider anti Brexit majority in the UK Parliament, it may also assist Prime Minister Johnson’s plans to pass his deal through Parliament, something he had failed to accomplish in the past. However, we maintain our worries as the big question remains if Tories and Brexit party combined, actually can get a majority. The pound could strengthen, should there be further clearing of the political uncertainty in UK. Cable rose yesterday, testing yet failing to break the 1.2885 (R1) resistance line. As the pair has clearly broken the downward trendline, incepted since the 1st of November, we switch our bearish outlook in favor for a sideways direction of the pair. Should the bears once again dictate the pair’s direction, we could see it aiming if not breaking the 1.2760 (S1) support line. On the other hand, should the bulls take over, we could see the pair breaking the 1.2885 (R1) resistance line and aim for the 1.3015 (R2) resistance level.

Today during the European session, we get Norway’s GDP rate for Q3, UK’s employment data for September and Germany’s more forward looking ZEW economic sentiment indicator for November. During tomorrow’s Asian session, we get Australia’s consumer confidence indicator for November, as well as the wage price index for Q3, while form Japan, we get the corporate goods prices growth rate for October. As for speakers ECB’s Coeure, Mersch and Lane, as well as Fed’s Clarida, Richmond Fed President Barkin and Philadelphia Fed President Harker (18:00, GMT) speak. Before we close our report though we would like to note, also the speech of US President Trump at the economic club in New York. Analysts tend to expect that there may be some comments about the US-Sino relationships and given the unpredictive and spontaneous character of the US President, we could see headlines reeling from the speech. Main point of interest seems to be whether the US President will confirm the rollback of US tariffs against imports from China, at least partially. Should he fail to do so, we could see a risk off sentiment prevailing once again in the markets. 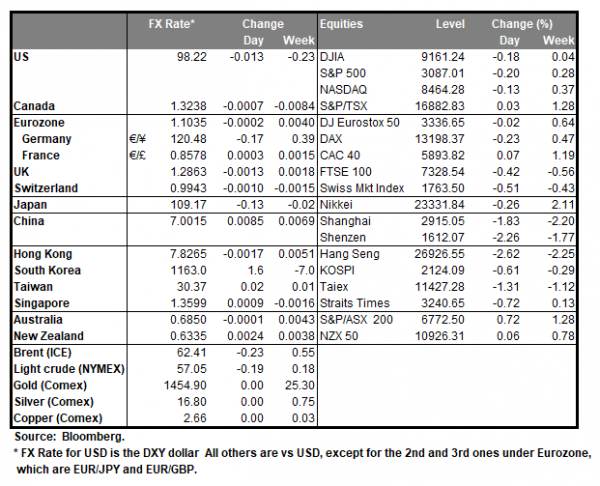