The data inflow this week continued to contrast the two dominant themes in the U.S. economy: a resilient U.S. consumer and a struggling manufacturing sector.

Retail sales data released today showed that spending bounced back from a dip in September. Sales at non-store retailers, which includes online sellers, drove the increase. With the job market strong and consumers continuing to see solid gains in wages, consumption should remain healthy through the remainder of the year.

The manufacturing outlook isn’t as bright. Newly released production data indicated that manufacturing took another step down in October (Chart 1). The U.S.-China trade war and softer global economic conditions are clearly weighing on the sector. However, as noted in a recent report, it is unlikely that, the malaise in manufacturing can single-handedly trigger a recession, given its small and shrinking share of the U.S. economy.

Although manufacturing weakened, we saw some improvement in small business confidence. The NFIB small business optimism index increased in October, with businesses signaling they will move forward with capital outlays in the months to come. This is a good sign for sputtering investment, which has contracted in the last two quarters as economic policy uncertainty spiked (Chart 2).

Much of this increase in uncertainty is coming from the U.S.-China trade war. There was some optimism last week that we might see the first deal in the conflict as the two sides edged towards a phase one mini-deal. It was even reported that the deal might be made official before the end of this month. However, it’s probably too early to pop the champagne. News emerged this week that officials were struggling to complete the deal. According to reports, China wants a greater reduction in tariffs, while U.S. officials do not believe China has made enough concessions to justify their removal. It’s probably a good idea to not hold our breath as we await the first breakthrough in this drawn-out saga.

Although trade uncertainty has made its way through the U.S. economy, it has yet to show up in overall price pressures. Indeed, despite the imposition of tariffs on many imported consumer goods from China in September, goods prices, which bear the brunt of the tariffs, on aggregate only rose by 0.3% on a year-over-year basis.

In addition to the rising U.S. dollar, other forces may be counteracting the price increases implied by tariffs. Elevated inventories for some consumer products are likely putting downward pressure on prices. There are also indications that importers are absorbing tariff impacts by compressing margins. The latter demonstrating how some U.S. firms are shouldering the burden of the trade war.

From the Federal Reserve’s perspective, the data are evolving largely in line with their economic forecasts. Inflation is at target and the consumption remains healthy. In addition, past rate cuts are moving through the economy, with the impacts most noticeable in housing. As we stated in an earlier report, without any further negative shocks, we believe the Fed has completed its mid-cycle adjustment.. 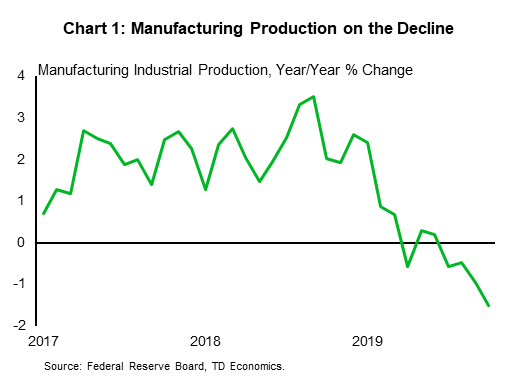 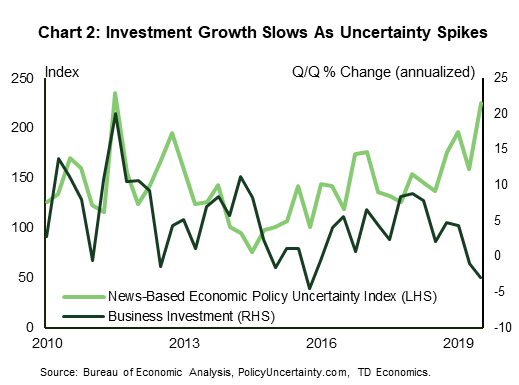 This solemn week of reflection was mirrored in the economic data. The TSX hit new highs, but bonds and non-oil commodity prices were signaling a more somber economic outlook. Domestically the economy continues to prove resilient considering the poor economic performances abroad. But, Canada’s resilience is likely to be increasingly tested by external developments in the months ahead .

A healthy labour market and robust population growth have translated into strong national housing activity so far this year. On a trend basis, housing starts are sizzling, while existing home sales have staged a nice rebound following a tumultuous 2018. But, October’s data (Chart 1) suggests that buyers took a bit of a break, holding national sales flat. Regionally, British Columbia continued to see activity tick higher, while sales dropped in Ontario for only the second time this year, ending a streak of seven consecutive months of improvement. Nevertheless, stable demand combined with the drop in new listings resulted in the national sales-to-new listings ratio moving higher in the month, placing it firmly in sellers’ market territory. In response, national home prices moved a touch higher, and stand nearly 6% above the level from a year ago.

As the housing market continues to perk up, concerns remain about the health of household finances and whether this housing recovery is sustainable. The household saving rate is low, indebtedness remains near all-time highs, and more recent data show that consumer insolvencies have moved higher (Chart 2). But, there are some important caveats to the trend in insolvencies. For one, the increase continues to reflect a rise in consumer proposals, not bankruptcies. This suggests that stressed households are more cognizant of their debt burdens and are doing something before they go into arrears. This ‘strategic’ behaviour would help explain why other indicators, such as unemployment and credit arrears remain in healthy territory, unlike past episodes of rising insolvencies.

In addition, the rise in insolvencies in the past few years largely reflected the economic downturn caused by the collapse in oil prices. The Prairies and Newfoundland were hit hardest, and insolvencies in these regions surged higher. But, recently insolvencies have ticked up in regions traditionally less exposed to oil price cycles, such as British Columbia and Ontario. As such, it may signal that rising housing costs and past increase in interest rates are now taking a bigger bite out of consumer finances.

One positive aspect for household finances has been the marked improvement in financial conditions since the start of the year. Mortgage rates are low but may not stay that way if the recent selloff in global bond markets persists. In fact, tightening domestic financial conditions may just be the trigger that forces the Bank of Canada’s hand early next year. The Bank of Canada has not been shy in communicating concerns about the state of household balance sheets. High household debt suggests that households are more sensitive to changes in interest rates than in past cycles. As such, an unanticipated spike in borrowing costs could trigger a marked downtick in consumer spending and housing activity, moving the Bank of Canada to respond by cutting its policy rate. 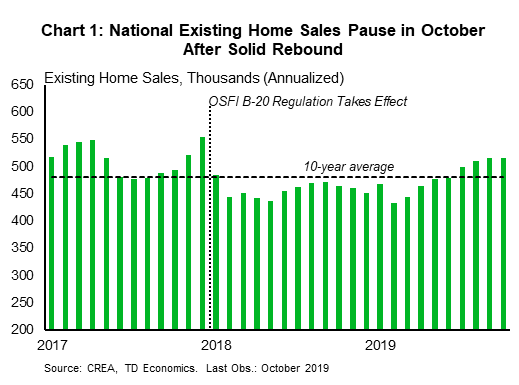 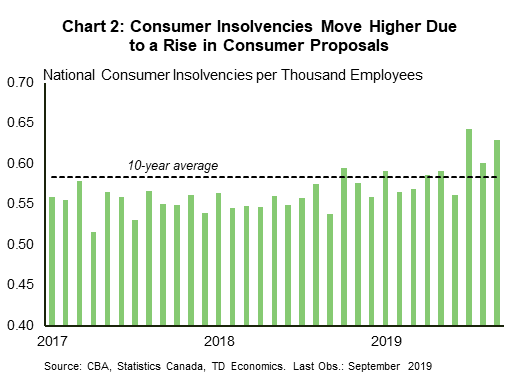 Manufacturing shipments are set to contract by 0.4% in September owing to a drag from transportation products. Motor vehicle shipments will face a modest headwind from UAW strikes south of the border, which caused parts shortages and ultimately drove Canadian factories to temporarily halt production, although most of the impact will be felt in October. Elsewhere, broad weakness across exports of metal and mineral products hints at some giveback of fabricated metals and nonmetallic minerals after a combined 3.2% increase in August. Energy prices were little changed on the month, offering no insight towards nominal petroleum shipments, although broader factory prices fell by 0.1% which should allow volumes to slightly outperform the headline print. 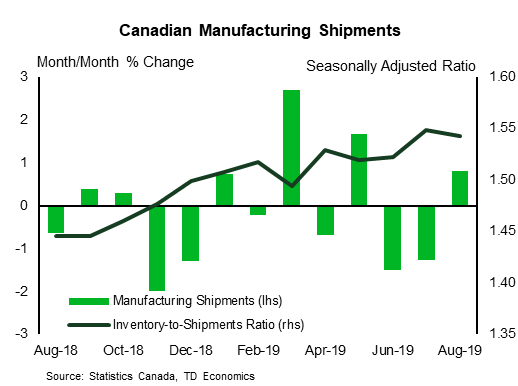 Headline CPI is forecast to recover to 2.0% y/y in October, with prices 0.4% higher on the month. Gasoline prices were little changed on the month despite seasonal headwinds, which should see the year-ago drag from energy diminish by about a tenth of a point. Outside of gasoline, we expect natural gas and heating oil to drive a modest increase in energy prices, reflecting unseasonably cold weather across Western Canada during the month. However, this will be more than offset by softer food prices following a pullback in producer-level food prices along with agricultural products. Stripping out both leaves the ex. food & energy index up 0.6% m/m, with much of this driven by seasonal effects in apparel and telecoms. Looking to the Bank’s preferred core measures, we see downside risks, owing to sizeable base-effects. 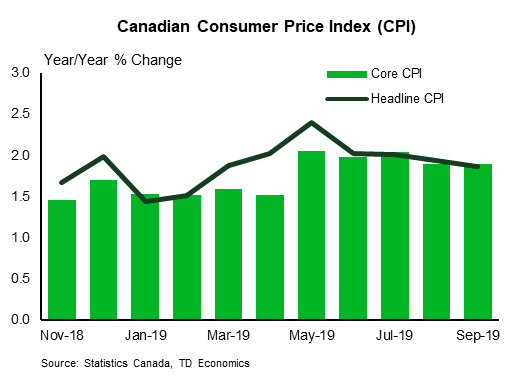 TD looks for retail sales to remain subdued with a 0.3% decline in September. Softer motor vehicles sales add to a more subdued 0.1% decline in the ex-autos measure, with lower gasoline prices exerting a modest headwind to nominal sales at the pump. On a brighter note, the pickup in consumer goods imports does suggest some upside for clothing and other textiles, and the continued recovery in the housing market should support retail sales of furniture and home furnishings. Real retail sales should come in below the headline print, providing a poor handoff to Q4 consumption. This reflects a 0.2% m/m increase in consumer goods prices in September, despite headline CPI falling by 0.4% m/m owing largely to weakness in services. 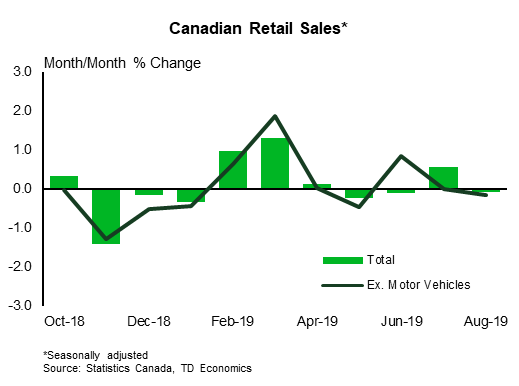