The USD weakened against JPY yesterday as a slightly risk off sentiment seemed to hover over the market. The negative news about the US-Sino relationships hit the markets in the American session, as President Trump reaffirmed on Tuesday that the US would hike tariffs in December should there be no deal with China. To complicate the situation even further, the US Senate unanimously passed a bill yesterday, which provides for sanctions against officials, for human rights violations in Hong Kong and puts the city under extra scrutiny for its preferred trading status with the US. China condemned the passage of the prementioned bill and vowed strong counter-measures to safeguard its sovereignty and security. Never the less, the USD is expected to be moved also from the release of FOMC’s minutes of its last meeting. Should the minutes show a decisiveness on behalf of the bank to maintain the interest rate level constant and maybe even include some hawkish comments, we could see the USD getting some support. On the flip side, should tensions in the US-Sino relationships, escalate further, we could see the greenback losing ground against the JPY, albeit the market may have grown tired of the issue’s back and forth. USD/JPY dropped yesterday, testing the 108.35 (S1) support line. The pair seems to maintain a sideways motion since 13th of the month, in a corridor formed by the 109.00 (R1) resistance line and the 108.35 (S1) support line. Should the pair come under the selling interest of the market, we could see it breaking the lower boundary of the 108.35 (S1) support line and aim for the 107.75 (S2) support level. Should the pair’s long positions be favored by the market on the other hand, we could see USD/JPY breaking the 109.00 (R1) resistance line and aim for the 109.70 (R2) resistance level.

The CAD weakened against the USD yesterday, as BoC’s Deputy Governor Wilkins in a speech yesterday, seemed to imply that a rate cut is an option available for the BoC. She stated that while BoC’s policy rate of +1.75% maybe relatively low, there is still room to maneuver for the bank, which a number of market participants interpreted as a dovish signal. According to analysts the statement increased chances for a rate cut early spring 2020 and hence had a bearish effect on the CAD. However, we would also like to add that actually the CAD weakened against the USD, earlier than the speech and the bearish effect may have been instigated by the weakening oil prices yesterday. We could see the release of Canada’s CPI rates for October moving the CAD today, while we also expect it to be influenced by the oil market. USD/CAD rose yesterday during the American session, breaking the 1.3230 (S1) resistance line, now turned to support. We could see the pair maintaining bullish tendencies in the near term, as the fundamental analysis above seems to favor CAD short positions. It should be noted though that the release of Canada’s CPI rates could create some volatility for the pair. On a more technical aspect, it should be noted that the pair’s RSI indicator in the 4-hour chart, has reached the reading of 70, implying a possible dominance of the bulls. Should the bulls actually remain in control of the pair’s direction, we could see it breaking the 1.3335 (R1) resistance level and aim for the 1.3430 (R2) resistance hurdle. Should on the other hand the bears take over, we could see the pair breaking the 1.3230 (S1) support line and aim for the 1.3125 (S2) support barrier, which served the pair faithfully at the beginning of the month.

During today’s European session, we get Germany’s PPI rate for October, while the ECB is to issue its financial stability review. In the American session, we get Canada’s inflation rates for October, the US EIA crude oil inventories figure and don’t forget the release of the minutes for the FOMC’s last meeting at the end of October. 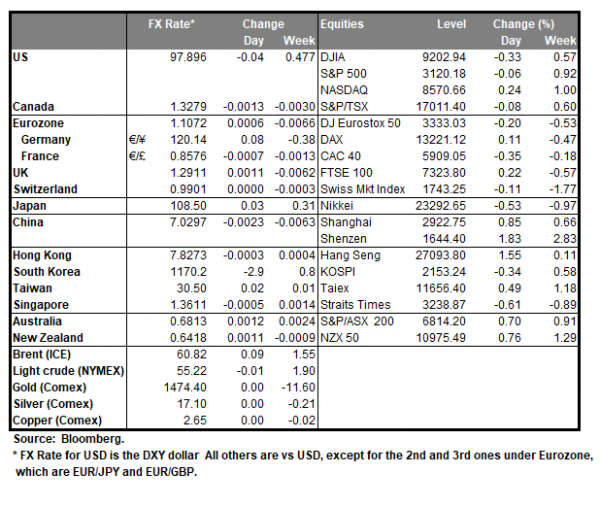