On the macro front, Germany’s producer price index (PPI) fell 0.6% on an annual basis in October, more than market expectations for a drop of 0.4%. In the previous month, the PPI had recorded a decline of 0.1%.

The US dollar rose against its peers, as US-China relations worsened, on speculation that “phase one” trade deal between the two nations may not be signed in 2019.

In the US data showed that the MBA mortgage applications decreased 2.2% on a weekly basis in the week ended 15 November 2019, following a rise of 9.6% in the prior month.

The minutes of the Federal Open Market Committee (FOMC) showed that most officials are considering maintaining its current interest rate level for a longer. The minutes showed that the labour market remained strong and that economic activity had been rising at a moderate rate. Additionally, the Fed reiterated that policy is not on a preset course and could change if economic conditions deteriorate significantly. However, officials see downside risks surrounding the economic outlook as elevated.

In the Asian session, at GMT0400, the pair is trading at 1.1075, with the EUR trading a tad lower against the USD from yesterday’s close.

Moving ahead, traders would await Euro-zone’s consumer confidence index for November, set to release in a few hours. Later in the day, the US existing home sales for October along with initial jobless claims will garner significant amount of investors’ attention. 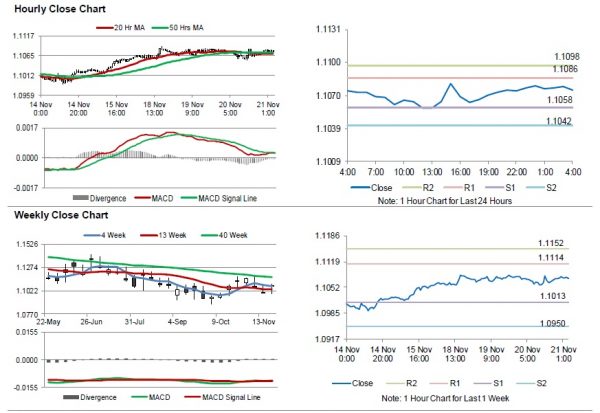