Tensions may rise even further between the US and China, as the Hong Kong bill passed through the US Congress and is send to US Pr. Trump to be signed. The US President is expected to sign the bill, turning it into law as further confrontation with Congress could prove to be risky, especially given the recent developments in the impeachment proceedings of Congress. The bill seems to increase risks surrounding a possible US-Sino phase 1 deal, as Beijing stated that it could take countermeasures if it turns into law. Yesterday’s headlines suggested that the signing of the deal may slip into next year, while Chinese chief negotiator Liu He, stated that he remains cautiously optimistic about the deal. The news increased the risk factor in the markets strengthening JPY at some point, yet fears seemed to recede during today’s Asian session which provided some support for the battered Aussie. AUD/USD dropped yesterday breaking the 0.6800 (R1) support line, now turned to resistance, yet during the Asian session today found some support. We could see the yesterday’s bearish tendencies for the pair continue today, should there be extensive negative headlines about the US-Sino relationships. Technically, for our bearish bias to change we would require the pair to break the downward trendline, which started to form since Tuesday. Should the bears maintain control over the pair’s direction, we could see the pair dropping further aiming if not breaking the 0.6775 (S1) support line and continue in search of lower grounds. Should the bulls influence the pair’s direction, we could see the pair clearly breaking the prementioned downward trendline, the 0.6800 (R1) resistance line and aim if not break the 0.6822 (R2) resistance level.

Oil prices jumped in the American session yesterday, as Russian president Putin stated that Russia would continue its cooperation with OPEC. The Russian President stated that Russia and OPEC have a “common goal” of keeping the oil market balanced and predictable and that Moscow is to continue with its cooperation under the global supply curbs deal. It should be noted that the rise in oil prices seems to have been instigated by the EIA release, which showed a build-up in crude oil inventories, yet at the same time, a drawdown in the Cushing inventories of -2.3 million barrels. It should be noted though that oil prices once again took a downturn in the Asian morning as worries about a possible US-Sino trade deal increased. For more info, please refer to our weekly oil outlook, due out later today. WTI prices rose during the American session yesterday breaking the 55.50 (S1) resistance line (now turned to support) and the 56.90 (S2) resistance level, yet retreated below the latter during the Asian session today. We expect the direction of the commodities prices to be influenced fundamentally by the US-Sino relationships, as the commodity tries to decide the direction of its next leg. Should the bullish tendencies be maintained, we could see WTI prices clearly breaking the 56.90 (R1) resistance line and aim for the 58.50 (R2) resistance level. Should on the flip side, the commodity come under the selling interest of the market, we could see WTI prices, aiming if not breaking the 55.50 (S1) support line.

During today’s American session, we get from the US the initial jobless claims figure, the Philly Fed Business Index for November, the number of existing home sales for October, and from Eurozone the consumer confidence for November. During the Asian session, we get Australia’s PMIs for November, Japan’s inflation rates for October and Japan’s manufacturing PMI for November. Also please bear in mind that the ECB s to publish the account of its last monetary policy meeting, and that BoE MPC members are to meet with UK Parliament’s treasury committee. As for speakers we have ECB’s Mersch and De Guindos, Cleveland Fed President Mester, yet we tend to focus on BoC governor Poloz’s speech which could move the Looney. 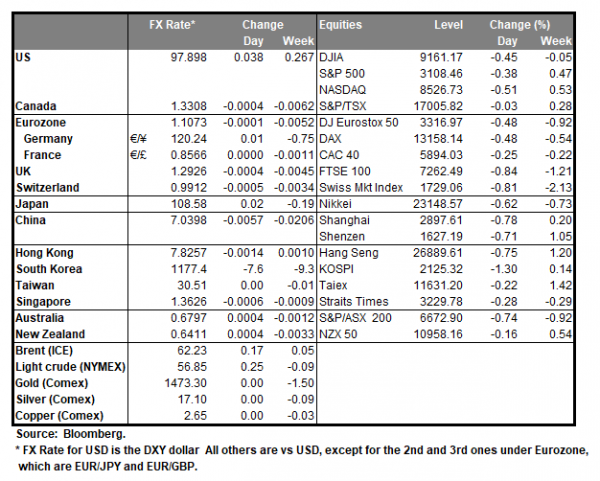