US President Donald Trump caused some jitters in financial markets this week when he suggested a trade deal could wait until the other side of the election. His Commerce Secretary Wilbur Ross added to the story by saying to CNBC that waiting until after the 2020 election to reach a deal could take away some of Beijing’s leverage. However, the day after Bloomberg reported that US officials close to the talks said the US and China are moving closer to agreeing on the amount of tariffs that would be rolled back in a phase-one deal. They also expressed belief that a trade deal would be completed before US tariffs are set to rise on 15 December. Trump chipped in himself on Thursday saying talks were ‘moving right along’.

On top of the Hong Kong bill voted through Congress recently, the US House of Representatives this week passed the Uyghur Human Rights Policy Act , which calls for targeted sanctions on members of the Chinese government related to Xinjiang re-education camps. It triggered a sharp response from China but there are no signs yet that the bills are affecting the trade talks.

Comment . We continue to look for a phase one deal to be struck soon and most likely over the coming week ahead of Sunday 15 December, when the new tariffs are set to be implemented. We may also see a postponement of the tariff increase if more time is needed for the talks. There are several reasons why we do not expect the tariffs to be implemented and that a phase one deal will be struck. First, the White House has calibrated tariffs on China, so that the first tranches would hurt the US the least. Hence, the last tranche left now will do much more damage – and possibly more so in the US than in China. Many of the products to be taxed are electronics like iPhones and laptops produced and exported by US companies from China to the US and they would thus mostly hurt US companies. As they are consumer products, the pass-through to consumers would also be much higher. Second, Trump will soon need some relief for the farmers that are in great pain due to China’s lack of purchases. They generally support Trump confronting China but have also been clear that a deal has to come, so they get their biggest market back.

Of course, we can never be sure Trump is rational so until we see a phase one deal the uncertainty remains . But if he was in doubt, this week showed clearly that moving on with more tariffs could lead to significant losses in equity markets and possibly add more downside pressure to a US economy. This could end up weakening his hand in the trade talks.

Chinese PMI data out over the weekend surprised to the upside and added to the evidence that the drag on the economy is easing (see chart 1). The PMI signals have been confirmed by other indicators such as rail freight, electricity consumption, global container freight, Taiwan export orders and copper prices. All of these tend to be good at capturing the economic trend in the Chinese economy. 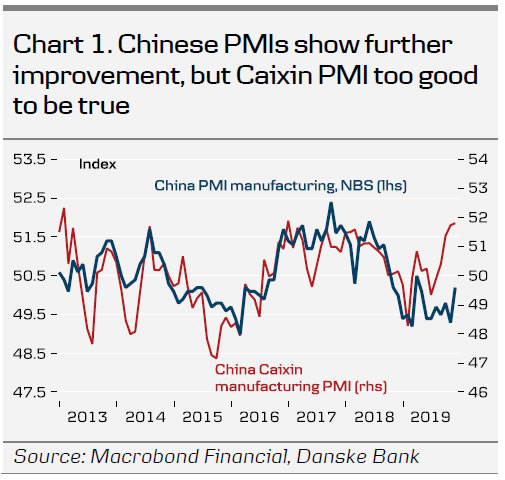 PBoC governor Yi Gang wrote that China has no plans of resorting to non-conventional monetary tools but should maintain ‘normal’ monetary policy as long as possible: “We should not let the money held by the Chinese people become worthless… Maintaining positive interest rates and upward-inclined yield curve is generally conducive to the economic entities, and in line with the Chinese people’s saving culture”. 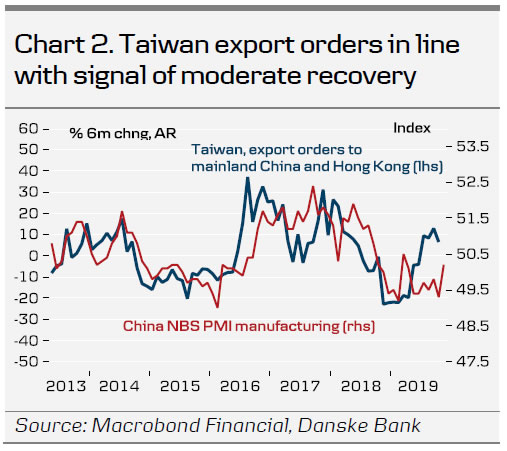 Hong Kong data continue to deteriorate sharply and point to the biggest economic recession since the global financial crisis. Chart 4 and 5 show the sharp drop in retail sales and PMI illustrating the severity of the crisis that was triggered by the escalation of the Hong Kong protests over the summer. 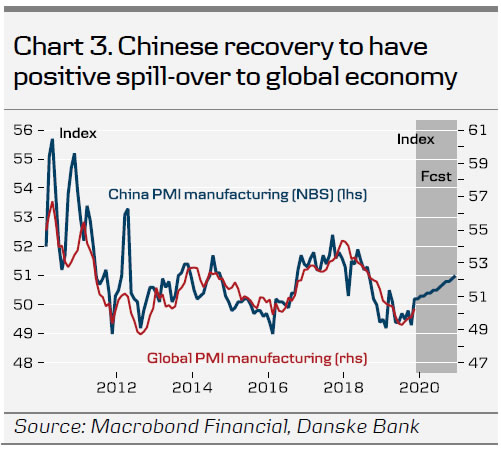 Comment. We continue to look for a moderate recovery in China as illustrated in chart two on the front page. We expect the stimulus implemented so far and a gradual improvement on the trade war front to be the main drivers. We believe China will await the results of the trade talks before deciding on much further stimulus. The economy in Hong Kong is heading for the worst crisis in decades as the downward pressure is likely to spread to the property market and lead to a protracted downturn. 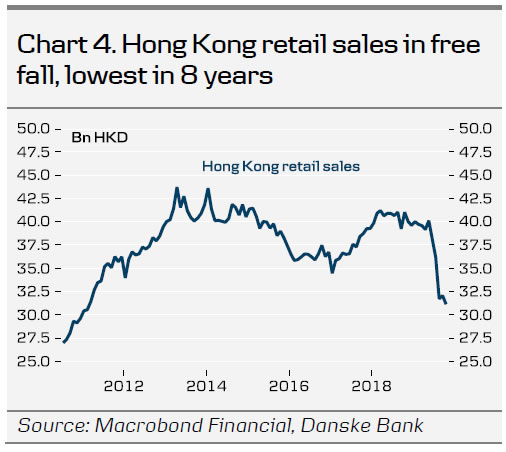 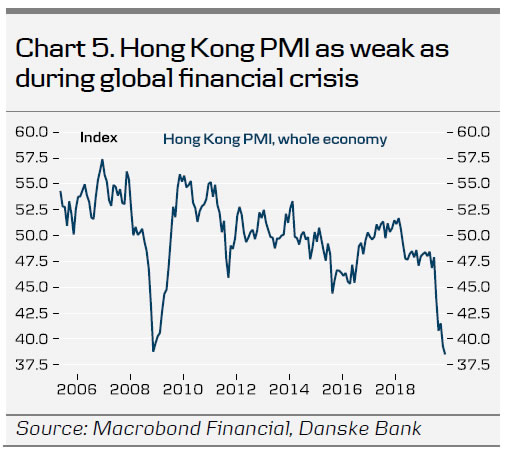 Huawei makes phone without US chips, but is at risk of financial sanctions

An analysis by UBS and Fomalhaut Techno Solutions shows that Huawei’s latest phone, the Mate 30, contains no parts from the US. They have taken the phone apart to look for US components and found none. Huawei’s strides to wean itself off the need for US supplies have happened faster than expected.

Before Huawei is cheering too much, articles over the past weeks revealed that the US has considered financial sanctions on the company that could make it virtually impossible for Huawei to make transactions in US dollars. Reuters reports that a source close to the White House discussions said it could still be revived in the coming months depending on how things go with Huawei.

Comment. The US seem very determined to stem the rise of Huawei globally and they could turn to more drastic options in the attempt to achieve this. The US confrontation only underlines that China will have one very clear goal in the coming years: to become independent of US technology as well as the USD. The latter may turn out to be more difficult but the push for CNY internationalisation and invoicing in other currencies than the USD is likely to get an extra boost from here.

Other China news this week: