Trade-related developments and employment data stole the limelight this week. With the deadline of the next wave of proposed tariffs on imports from China a little more than a week away, investors kept a close eye on the state of the U.S.-China trade negotiations and trade policy more broadly. On that front, comments by President Trump earlier this week suggesting that the U.S.-China deal could wait until after the elections were not encouraging, sending equity markets sharply lower. Sentiment was further dampened by news that the U.S. will restore steel and aluminum tariffs on Brazil and Argentina for alleged currency manipulation, and the threat to impose tariffs on $2.4bn of imports from France.

Equity markets rebounded toward the end of the week, amid news of Beijing reaffirming that the talks remain on track and the excellent job numbers. Oil prices rallied on the news that OPEC+ countries agreed to deepen existing production cuts, and Saudi Arabia promising to maintain its voluntary 400K bpd cut, bringing total cuts to 2.1 million bpd.

Trade data was not encouraging this week as trade volumes continued to slow in October. Export and import volumes declined for the second straight month. Since imports fell more than exports the U.S. trade deficit narrowed for the second month in a row, hardly a sign of health.

The return of trade tensions this week suggests that trade policy will likely remain volatile and exports sluggish in the year ahead. This is not good news for U.S. businesses, particularly manufacturers, who continue to contend with retaliatory tariffs, weak global demand and a strong Dollar. Manufacturing sentiment ebbed further in November, with the ISM manufacturing index edging lower to 48.1 from 48.3 in October. While the production subcomponent edged higher on the month, it remained in contractionary territory, and new orders and employment sub-indexes continued to deteriorate, signaling that manufacturing output could further worsen before it gets better.

The services sector hasn’t been immune to trade-related headwinds, with the ISM non-manufacturing index edging 0.8 points lower to 53.9 in October. However, it remains well in expansionary territory, supported by resilient domestic demand. Two-thirds of non-manufacturing industries surveyed in October reported growth, compared to less than a third in the manufacturing survey (Chart 1).

This divergence of fortunes between the manufacturing and services sector continues to manifest in employment data. Payrolls expanded by an impressive 266k in November, with service industries contributing 206k to the headline. Businesses in the services sector have been ramping up hiring since July (Chart 2), while gains remain muted in the goods-producing sector, with the pop in November reflecting the end of the GM strike.

All in all, despite uncertainty on the trade front and softer global growth, the labor market has remained remarkably resilient. With reports like this, the FOMC can sit comfortably on the sidelines after cutting rates three times this year. As long as international risks do not intensify and hurt confidence domestically, the American economy will remain in expansion, supported by a healthy consumer. 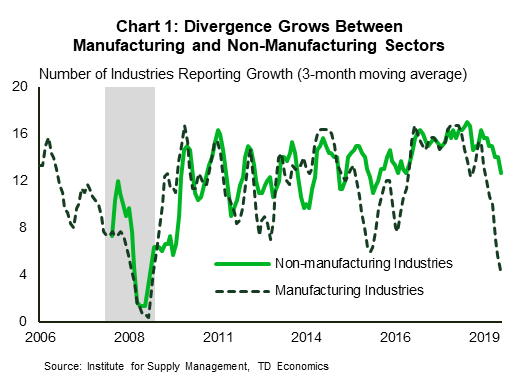 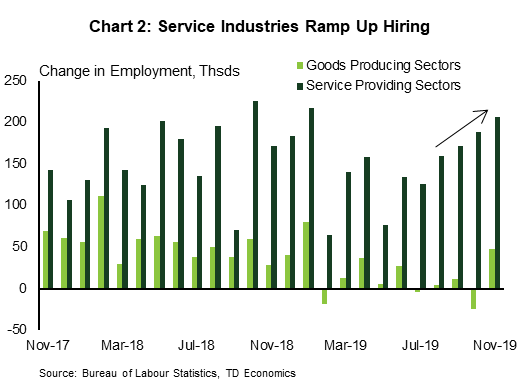 The Bank of Canada rate decision took center-stage this week, but the outcome was not all that surprising. Citing waning recession concerns, improvement in financial market sentiment, and an economic outlook that’s evolving in line with their expectations, the Bank opted to hold the policy rate at 1.75%. However, it was keen to note that it will continue to closely monitor the resilience of Canada’s economy.

Deputy Governor Tim Lane provided more insight on the decision and the Bank thought process in a speech on Thursday. DG Lane compared and contrasted Bank of Canada policy decisions with those of the Federal Reserve to underline the point that, despite the interconnectedness of the two economies, the Bank does not have to move in lock-step with the Fed and that policy paths have diverged before (Chart 1).

According to DG Lane, the Bank of Canada did not follow the Fed in cutting rates in 2019 because inflation and its economic outlook are on target and the policy rate was already lower than that of the Fed’s. He highlighted the recent strength in the labor market as the key reason why Canada’s economy has been resilient to external shocks.

Unfortunately, today’s labour market data pokes some holes in that narrative. The Canadian economy shed 71.2k net jobs in November and the unemployment rate climbed to 5.9% from 5.5%. Weakness was seen across all forms of employment (private, public and self). Although its just one month of data, it will certainly send worrying signals to the Bank’s Governing Council.

Trade uncertainty also continues to gray the skies. Even with the volume of exports increasing in October due to a dramatic surge in artwork exports, the level has barely shifted since the beginning of the year. Looking ahead, growth in exports will likely remain subdued reflecting the decline in U.S. manufacturing and continuation of global trade conflicts.

Amid the headwinds, the Bank of Canada will still think twice about providing further support to the economy. The Bank remains concerned about the high levels of debt held by Canadian households. This worry was backed up in October’s credit data, which showed a 4% rise in household credit relative to a year ago, extending an upward trend that started in February (Chart 2). The increase in household credit was driven by mortgages, whereas growth in consumer credit continues to moderate. While lowering rates could provide more support to the housing market, it could also raise the level of household debt, heightening already existing vulnerabilities in the Canadian economy.

This week’s statements made it abundantly clear that the Bank has a high bar for cutting rates. Today’s labour market data may have taken us closer to reaching that bar, but we’re not there yet. Without continued labour market weakness feeding into consumer spending and housing activity, or a further escalation in trade conflicts, the Bank may still find it comfortable to remain on the sidelines for the time being. 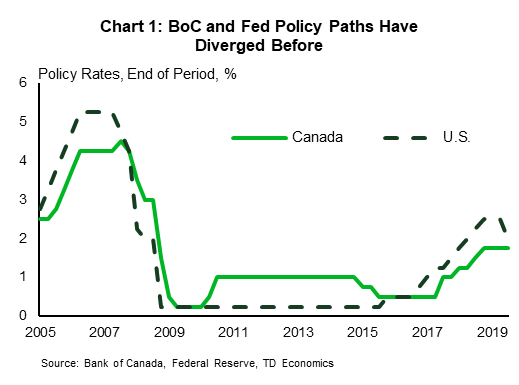 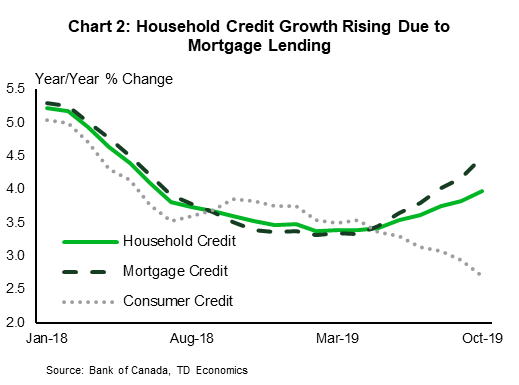 We look for the Fed to keep rates steady at 1.50-1.75% next week, bringing officially to an end the mid-cycle adjustment that encompassed 75bp of policy easing. We also forecast IOER to remain unchanged at 1.55%. The FOMC is likely to communicate patience in deciding future policy moves and to reiterate that a “material reassessment” in the outlook is a precondition for them. We don’t anticipate any dissenting officials next week —a first since the May FOMC meeting. 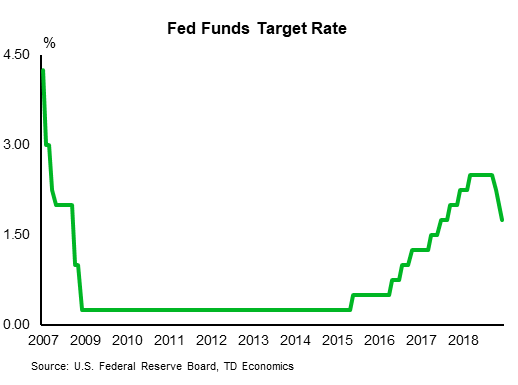 We look for headline inflation to tick up two tenths to 2.0% y/y in November (0.2% m/m), mostly reflecting a gain in prices in the ex-food and energy segment. In effect, core inflation should stay unchanged at 2.3% y/y on the back of a 0.2% m/m increase. We expect core goods inflation to recover m/m and for core services inflation to stay unchanged at 0.2% m/m. We anticipate OER to advance 0.2% m/m, largely steady vs last month, but for the ex-shelter segment to slow on a monthly basis. 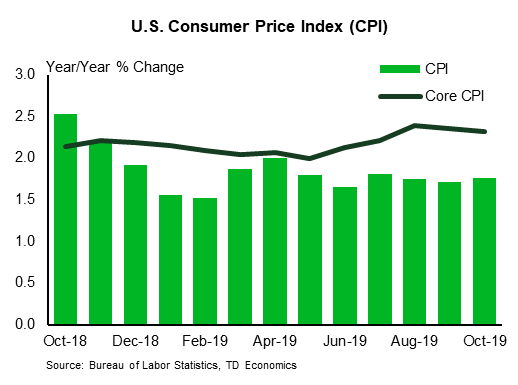 We look for retail sales to register a 0.3% gain for November, largely matching last month’s print, on the back of a moderate increase in the control group (+0.2% m/m). A 1% gain in auto sales and further gains in sales at gasoline stations should also boost headline growth during the month. All in, data published so far in Q4 suggests a moderate pare back in household spending. 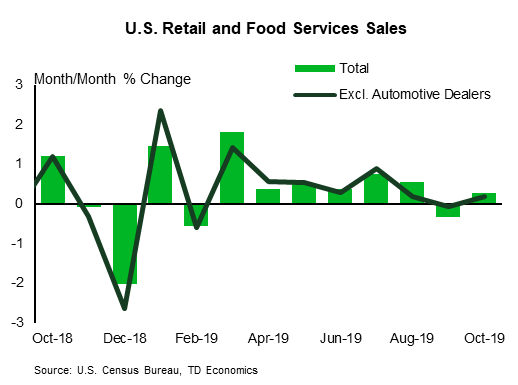 TD looks for housing starts to make a partial recovery to a 215k pace in November, helped by a rebound in the volatile multi-unit component. Multi-unit starts fell by 12.5% m/m in October and sit 25% below the peak from June, although unseasonably cold weather will limit any recovery. Cold weather will also weigh on single family homebuilding, along with the loss of 21k construction sector jobs in October. Underpinning housing demand is the continued strength of the labour market and solid population growth. 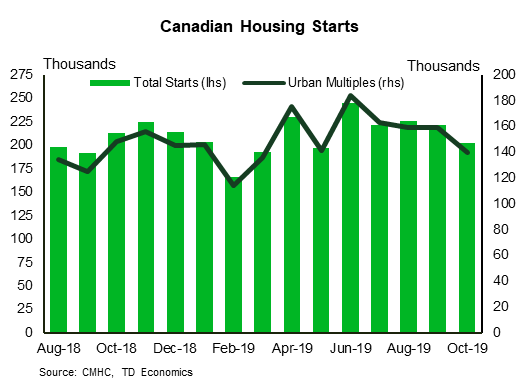