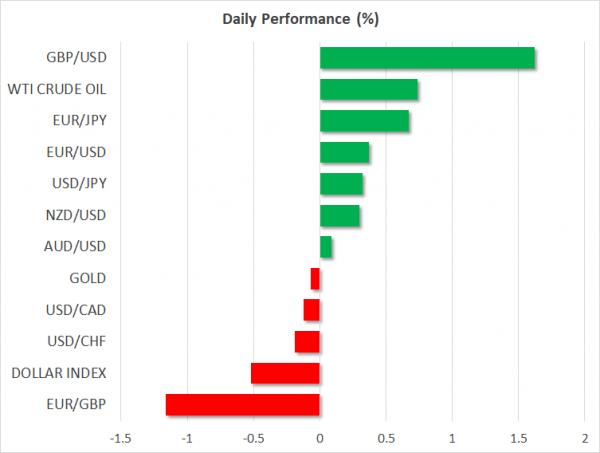 The British pound exploded higher overnight, after exit polls for the UK election suggested that Boris Johnson’s Conservative party would win a strong majority in Parliament, something confirmed by the official results a few hours later. The Tories won 363 seats, comfortably above the 326 needed for a majority, predominantly taking seats away from Labour party. Cable jumped more than three big figures to touch $1.35, before retreating towards $1.34, with the Brexit-sensitive euro rising in sympathy.

The result implies that PM Johnson can now push his Brexit deal through Parliament before year-end, allowing the UK to officially exit the EU by January. Of course, that would only mean that a transition period begins, and unless the two sides can reach a comprehensive trade deal by the end of 2020 – which seems almost unfathomable – the UK could still leave without a deal. Britain could of course request an extension, but that would need to happen by June, and Boris Johnson has repeatedly vowed not to do that.

In other words, for all the euphoria in the pound right now, we could very well be staring down the barrel of a no-deal Brexit once again next year. Naturally though, this is a conversation for a different day and investors will probably not focus on this risk for a few months still.

Even so, the bottom line is that it’s difficult to envision any more gains in sterling from here. As a reminder, the EU-Canada trade deal took seven years to negotiate, so even assuming that everything goes smoothly in the EU-UK talks – which it probably won’t – it’s still a tall task to wrap it up in one year. Expect the drama to return soon.

Things were equally exciting in the broader market, where a powerful risk-on mood took hold after the US President tweeted that a trade deal with China is “very close”. Media reports then started to land with the details, and Trump officially signed off on this ‘phase one’ deal a few hours later.

America will cancel the new tariffs it had scheduled for Sunday and will halve the rates on all its existing tariffs, in exchange for Chinese agricultural purchases in the tune of $50 billion annually and commitments to raise intellectual property protection. Stock markets in every region were a sea of green, and futures point to another record high open on Wall Street today. In the FX market, the biggest mover was the yen, which fell off a cliff – especially against the mighty pound.

What now? To be sure, the positive mood could linger, and the next leg higher in markets is likely to come when China officially agrees to this deal, as Beijing is only reported to be in agreement so far. There is of course a risk that profit-taking weighs on markets in the next weeks, as it has been a most lucrative year, with the S&P 500 up 26.4% and literally every asset class recording significant gains – so some funds may decide to close their books early.

In the big picture, it’s unlikely that we will see any further progress in trade, at least not on this side of the US election. The two sides spent more than two months trying to sort out the simplest of issues, so what are the chances of finding common ground on the complex stuff like unfair industrial subsidies anytime soon? Not to mention that Trump has thrown away most of his leverage by agreeing to roll back the tariffs, so Beijing probably won’t be in any rush to make more concessions.

The ECB meeting yesterday didn’t provide much news. President Lagarde appeared relatively optimistic, indicating that there are some initial signs of stabilization in growth slowdown. We’ll find out more on that early on Monday, when the preliminary PMIs for December are released.

In the US, retail sales numbers for November are ripe for release, and any surprises could shake the dollar.