The pound rallied during the Asian session today as election results seem to provide a clear majority in the UK Parliament for the Conservatives. Latest projections seem to allow for a majority of 40 seats for the Conservatives currently, the final results are still pending, however the current count already seems to provide a majority for the Tories of 29 seats with another 25 seats pending. Such a substantial majority could enable Boris Johnson to pass his Brexit deal with the EU, practically enabling the UK to reach Brexit. It was characteristic that Boris Johnson stated that the election result is a powerful mandate for the government to get Brexit done. Also, political analysts tend to note that a wide majority of the Conservatives in the UK Parliament could also act as a cushion for any repercussions which are to follow with the EU about the country’s trade relationship. Should the wide majority be confirmed we expect Brexit developments to be rapid. The pound rallied against the USD and seems to be stabilizing, yet we could see further positive headlines about Brexit coming in which could fuel the sterling’s bullish run even further, especially should there be positive headlines for Brexit from Brussels. Cable rallied yesterday breaking the 1.3340 (S1) resistance line, now turned to support and testing the 1.3500 (R1) resistance level. The pair seems to have stabilised after the rally, yet we could see further support for the pound should there be positive headlines for Brexit. On the other hand, we have to mention that the pair’s RSI indicator in the 4 hour chart has breached the reading of 70, supporting the notion of the bull’s dominance, yet at the same time could imply that the pair’s long positions may be somewhat overcrowded. Should the bulls maintain control over the pair’s direction, we could see the pair breaking the 1.3500 (R1) resistance line and aim for the 1.3660 (R2) resistance level. Should the bears take over we could see the pair aiming if not breaking the 1.3340 (S1) support line in search of lower grounds.

…while the Aussie rallies on trade hopes…

The Aussie continued its rally against the USD yesterday and during the Asian session today as hopes about a phase 1 deal between the US and China strengthened. Media reported that the US reached in principle a phase 1 trade deal with China, also mentioning that a statement from the White House was expected soon. It was characteristic that US trade Representative Lighthitzer told reporters that announcements were possibly imminent. In a tweet US President Trump stated that the US was very close to striking a deal with China, mentioning that both sides want it. Should the development be confirmed, we could see the planned US tariffs for December 15th being delayed and even see some existing tariff levels being reduced, in an improvement of the trade relationships of the two countries. Such a development could enable commodity currencies to strengthen further, while safe havens such a gold and JPY could weaken. AUD/USD continued to rise and broke the 0.6905 (S1) resistance line now turned to support and tested the 0.6930 (R1) resistance level. We maintain a bullish outlook for the pair and for it to change we would require the pair to break the upward trendline incepted since the 11th of December. Should the pair find fresh buying orders along its path, we could see it breaking the 0.6930 (R1) resistance line and aim for the 0.6955 (R2) resistance level. On the flip side, should the pair come under the selling interest of the market, we could see it breaking the 0.6905 (S1) support line and aim for the 0.6875 (S2) support level. 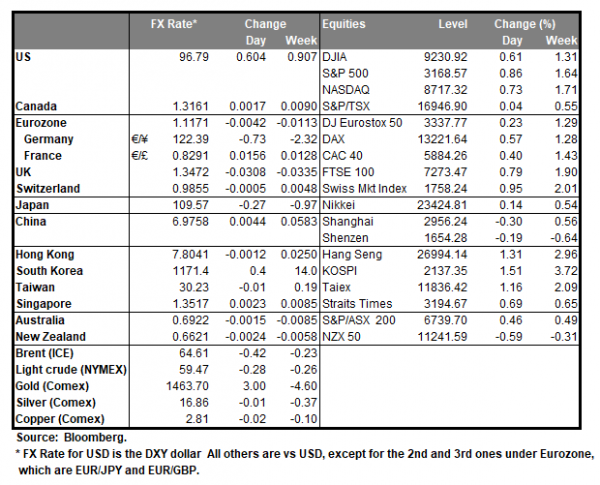