The USD strengthened against a number of other currencies yesterday as financial releases tended to favour the greenback. Specifically, the US headline retail sales accelerated as expected, while at the same time the initial jobless claims dropped for a fifth consecutive week, suggesting a tightness in the US labour market. Also, the stellar rise of the Philly Fed Business Index outperformed expectations, suggesting a rebound in manufacturing activity at the wider Philly area. Analysts tend to note that consumers seem to lead the way, as retail sales continue to accelerate and strengthen the arguments for a better GDP reading in Q4 for 2019. Also, the tendency of US treasury yields to rise, more demand for the greenback and stock-markets record highs may boost the USD against safe haven JPY. Should the US continue to release favourable financial data we expect the USD to advance further against the JPY in the coming few days. USD/JPY rose aiming for the 110.35 (R1) resistance line. We maintain our bias for a sideways movement of the pair, however the pair’s price action seems to be forming a slight upward trendline. Once again today’s financials and other fundamentals could affect USD/JPY. Please note that the pair’s RSI indicator in the 4 hour chart is above the reading of 70, which on the one hand seem to confirm buyer’s dominance, yet on the other may imply a rather overcrowded long position. Should the pair come under the selling interest of the market, we could see it aiming, if not breaking the 109.70 (S1) support line travelling further south. On the flip side should the pair’s long positions be favoured by the market, we could see it breaking the 110.35 (R1) resistance line aiming for the 111.00 (R2) resistance hurdle.

…while the Aussie seems unimpressed by Chinese data…

The Aussie as well as other commodity currencies seem to have failed to benefit from the release of a number of Chinese financial data for December. It should be noted that the data provided some mixed signals as the Chinese GDP growth rate reached the lowest in a number of years as was expected, yet on the flip side, other indicators outperformed expectations. Characteristically the industrial output accelerated instead of slowing down as it was expected and the same applies for the retail sales growth rate, both for December providing some solid growth rates. Analysts tend to note that the slowing of the GDP growth rate could have resulted from the extended trade war with the US while at the same time seem convinced that the rate may be sustainable, especially in the light of the newly signed initial US-Sino trade pact. On the other hand, a recent Reuters poll among economists seems to expect further cooling of the Chinese economy with growth reaching +5.9% yoy. Should the headlines continue to underscore a stabilization or even a rebound of the Chinese economy we could see the Aussie gaining some ground. AUD/USD maintained a sideways movement yesterday after dropping and breaking the 0.6905 (R1) support line, now turned to resistance. We maintain our sideways bias for the pair as the pair seems to have stabilised over after the drop in yesterday’s American session. Should the bears take control over the pair’s direction we could see it breaking the 0.6875 (S1) support line and aim for the 0.6850 (S2) support level. Should the bulls take over, we could see the pair breaking the 0.6905 (R1) line and aim for the 0.6975 (R2) barrier.

Today during the European session, we get from the UK retail sales growth rate for December as well as Eurozone’s final HICP rate for the same month. In the American session, we get from the US the Housing starts and building permits numbers, both for December as well as the preliminary Michigan consumer sentiment for January and the Baker Hughes oil rig count. As for speakers, please note that Philadelphia Fed President Harker and Fed’s Quarles speak, which are scheduled to speak today. 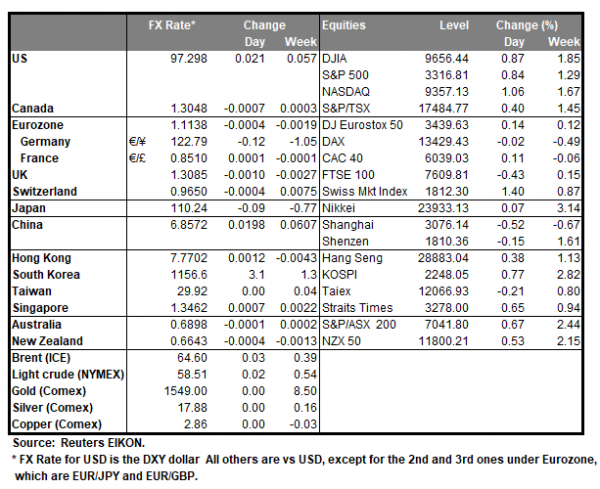