The revised version of the United States-Mexico-Canada Agreement (USMCA), or CUSMA in Canada, is now heading to President Trump’s desk. The deal was signed trilaterally by the three parties involved on December 10 2019, and subsequently approved by the Senate on Thursday afternoon with a bipartisan majority. US steel/aluminum tariffs in place at this time a year ago are long gone, and the US and China appear to have taken a step back in their trade war. The easing in external growth risks is welcome for a small open economy for Canada, and lowers the risk of a substantial softening in the economy this year. But domestic growth headwinds still remain, and those should continue to keep a lid on go-forward growth in the economy.

The final US version of the USMCA, the long-awaited replacement for the two and a half decade old NAFTA, has been tweaked from the initial deal agreed to in the fall of 2018 (see our commentary on that initial agreement here). The bulk of those changes should impact US-Mexico more than US-Canada trade – for example, including measures to increase flexibility to pursue violations regarding labour and environment. To be sure, there will be individual Canadian businesses impacted as well. Increases to rules-of-origin thresholds in the auto sector will at least marginally impinge on the competitiveness of North American auto supply chains, and a boost in the amount of cross-border duty-free purchases in Canada could worry some domestic retailers (although will probably be welcomed by consumers). There was also some relaxing of required upgrades to Canadian protection for biologic drugs agreed to in the initial version. At it’s core, though, this is still – like the NAFTA it will replace – a free trade deal. Virtually all (99%+) of total Canadian merchandise exports to the US will still be tariff-free, by our count, similar to under the NAFTA it is replacing.

The US and China signed a “phase one” trade deal in Washington earlier Wednesday. The deal has helped to boost global markets in recent weeks/months, but more by trimming the odds of a significantly worse escalation in trade tensions between the two global powers than the con-tents of the deal itself, which still appear to be relatively modest. The US agreed to roll back half of last September’s tariff hikes – but that only amounts to about 10% of the total increase in tariff costs to-date, and the rest will remain in place indefinitely. China offered to purchase at least $200 billion of US goods and services within the next two years in ex-change, but there are serious questions about whether they will be able/willing to follow through. And, if they did, the reorientation of trade flows might just impact the geographical composition of US trade rather than the total amount itself. The US is likely to remain a large net bor-rower from abroad, and that means the country will continue to run a significant trade deficit overall. 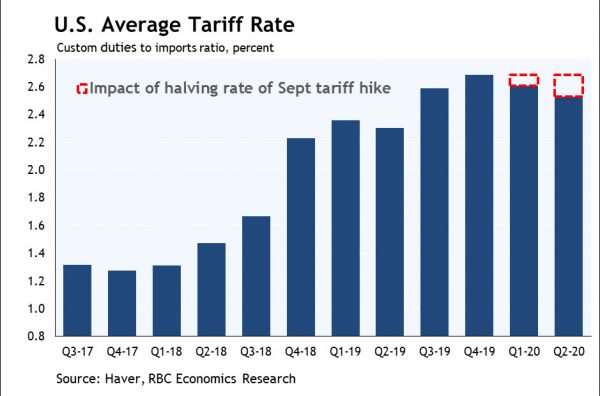 And the Trump administration’s approach to trade will remain unpredictable. Still, after a year and a half of broadly steady deterio-ration in the trading relationship between the two global powers, any concrete evidence of easing (eg. the actual tariff cuts from the US side) helps to trim the odds of a key downside risks to the broader global economic backdrop, and should put a floor under the US industrial sector, which has been burdened with paying the bulk of increased tariff costs to-date. That should spillover into an easing in headwinds for the Canadian industrial sector as well, and reduced uncertainty could be enough to get businesses to put a few more investment dollars to work.

Still, external growth concerns have not been the only headwinds for the Canadian economy. Businesses have, reportedly, been more worried about labour shortages in most of the country than external trade risks. The oil & gas sector continues to struggle due to difficulties getting new pipeline infrastructure built, and the mountain pine beetle infestation has decimated supply in the BC forestry industry. The Canadian consumer is still struggling to gain traction, despite ostensibly strong labour markets, as al-ready high debt levels and housing affordability issues crimp purchasing power. So external developments have been modestly positive – and we bumped up our own expectations for US GDP growth over the first half of next year slightly in response to the US-China trade deal. Yet, as we noted last year, longer-run structural growth impediments will continue to cap the rate of economic growth that should be expected going forward, regardless what happens with international trade developments.

Ongoing Weakness For The US Currency Despite This Yield Momentum

Dollar Index Is Torn Between Stimulus And Beige Book