BoC remained on hold yesterday as was widely expected yet the Loonie weakened as the possibility of a future rate cut increased. In his press conference BoC governor Poloz stated that the “door is open” to a possible rate cut “but it hinges on how the data evolve from here”. In contrast to its previous statement the bank stated yesterday that the Canadian economy is no longer operating close to capacity. The BOC forecasts Canadian GDP will grow by 1.6% for 2020 and 2% in 2021, following 1.6% growth in 2019 and inflation to remain around 2 % over the projection horizon. Overall, we tend to view the key take aways of the decision to be the bank’s turn into a more pessimistic outlook and dovishness, while at the same time CAD traders should pay special attention to financial releases as the BoC places more weight on them. Should the financial releases continue to be mixed we could see the Loonie weakening further, in effect being more data driven. USD/CAD rose yesterday breaking the 1.3125 (S1) resistance line, now turned to support. We maintain a bullish outlook for the pair, yet financial releases during the American session as well as the course of oil prices, could alter the pair’s direction. Please note that the RSI indicator is currently near the reading of 70, which on the one hand seems to confirm the bull’s dominance, while at the same time may imply a rather overcrowded long position for the pair. Should the pair come under the selling interest of the market, we could see it breaking the 1.3125 (S1) support line aiming for the 1.3025 (S2) support level. On the flip side should the pair’s long positions be favoured by the market, we could see it breaking the 1.3230 (R1) resistance line aiming for higher grounds.

Today during the late European session, we get ECB’s interest rate decision (12:30, GMT), while later on Christine Lagarde is to deliver a press conference about the decision and the bank’s future intentions (13:30, GMT). The bank is expected to keep rates unchanged at -0.50% for the deposit rate and 0.0% for the refinancing rate. Currently EUR OIS imply a probability for the bank remaining on hold of 75.6%, strengthening arguments for such a scenario. The first decision of the ECB for 2020, could also bring a formal launch of a strategy review for the bank, affecting ECB’s inflation target, a development which could have far reaching effects on the bank’s monetary policy. The recent improvement of PMIs along with inflation rates picking up pace could also be an issue. We would like to see if last meeting’s contained optimism could increase providing some more optimistic comments along with some support for the single currency. Please bear in mind that volatility for EUR pairs is expected to linger on, during Christine Lagarde’s press conference. EUR/USD maintained a sideways motion yesterday below the 1.1105 (R1) resistance line. We expect the pair to maintain a sideways movement, yet at the same time the ECB interest rate decision and Christine Lagarde’s press conference may alter the pair’s direction. Should a more optimistic tone be sensed by the market we could see the pair rising, as the EUR could strengthen. Should the bears take control over the pair’s direction we could see it breaking the 1.1050 (S1) support line, aiming for the 1.0990 (S2) support level. Should the bulls take over the pair could break the 1.1105 (R1) line and aim for the 1.1170 (R2) resistance barrier.

Today during the European session, we get from Norway Norgesbank’s interest rate rate decision, which is expected to remain on hold at +1.5%. During the American session, we get the US initial jobless claims figure as well as the EIA crude oil inventories figure. Just before the Asian session starts, we get New Zealand’s inflation rates and later on Australia’s Manufacturing PMI for January as well as Japan’s inflation rates for December and the manufacturing PMI for January. Also, the minutes of BoJ’s December meeting are due out. 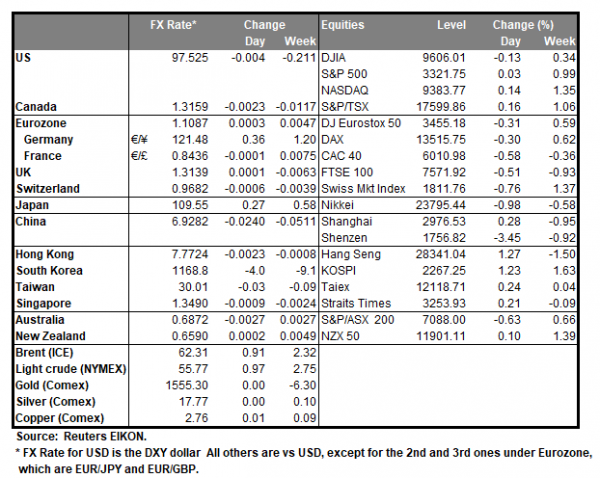