Sterling nudges along slumped at multi-month lows and increasingly looks under pressure having underperformed the week’s broader risk rally. Trading below the 1.30 handle, GBPUSD appears likely to deliver a bearish weekly close and might even fancy a retest of 1.29 support. While I still think the longer-term structural story for the UK sees GBPUSD higher, Brexit negotiations remain complicated and difficult. 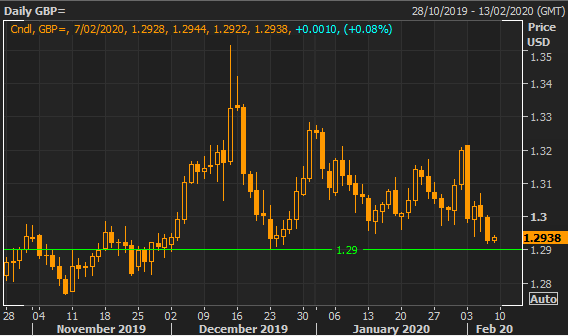 An enduring appetite for risk assets that began Monday seems somewhat satiated for the time being, as European benchmarks in FTSE and DAX point to a marginally softer open. There hasn’t exactly been any significant news flow, though virus reports of 61 passengers on a Japanese cruise ship have returned positive readings might have initiated the pull-back. An optimistic conversation held between President Xi and Trump, where both expressed confidence in each other’s containment efforts, continues a trend of clear disinterest in catastrophising the likely significant yet unknown economic impacts throughout the region.

Markets are settled walking into Europe, but keeps on the lookout for volatility to reignite closer to Non-farm Payrolls – the week’s key piece of data. As US data (PMIs, ADPs) has been reasonably positive in the lead-up, another win here – and it’s certainly looking that way – in which NFPs beats out consensus expectations of 160k, should keep 2020’s theme of US exceptionalism intact.

With everything having been well flagged in terms of a significant reduction to H1 2020 growth as a result of nCoV, risk sentiment could very well try to hang its hat tonight on a prevailing story of US exceptionalism, convincing the investor community that things really aren’t that bad.

Oil on the mend?

As risk appetite seemingly looks to be on the mend, it’s natural to expect a buoyant effect on crude oil, which indeed has stay supported around $54/bbl – $54.50/bbl. If the ratio of nCoV recoveries/death continues to improve – the investor community might sense a bottom here, especially having tested those levels three times this week. Mix that in with the potential of deeper OPEC cuts to oil output and there arguably could be near-term sentiment for crude to push higher, potentially closing Monday’s gap to $58/bbl.

It was a busy day of soundbites for AUDUSD that ultimately led the commodity currency lower back in the vicinity of 0.67 levels. RBA Gov. Lowe tilted negative in his comments appearing before the House of Reps when it came to the spillover effects of Coronavirus, but this was largely expected.

Similar to November, Lowe expressed a negative attitude towards unconventional monetary policy, asserted it was “not on the agenda at the moment” and will only become a consideration if interest rates eased to 0.25%. So once again, the threshold for QE is high and negative rates appear to be “extraordinarily unlikely” according to the RBA.

Gold breaches 1700 as correction from 1765 extends