The pound strengthened against the USD and the EUR yesterday, as the reshuffling of the UK cabinet by Johnson, also affected UK’s finance minister Javid. In a characteristic move by UK’s PM Boris Johnson resembling a tightening of political control, the UK cabinet was reshuffled. Media reported that the UK finance minister Javid had to resign after his denial to remove his advisers and replacing them with officials from Johnson’s office. As we had mentioned last week, the UK Finance minister was opposing plans for a larger fiscal stimulus which was promoted by Johnson’s, close advisor Cummings in a power struggle between the two politicians. The removal of Javid as finance minister, strengthens market expectations for a wider fiscal stimulus to be included in the March’s budget easing further the necessity for monetary stimulus by the BoE. Should the headlines continue to support such market expectations for a larger fiscal stimulus, we could see the pound strengthening further. Also, we wouldn’t be surprised to see headlines about a possible substantial corporation tax rate cut, which could also strengthen the pound. Cable rose yesterday breaking the 1.3015 (S1) resistance line, now turned to support. We maintain a bullish outlook for the pair for the time being. Please note though that the RSI indicator in the 4 hour chart, is near the reading of 70, mirroring the strength of the bulls, yet at the same time could be implying a rather overcrowded long position for the pair. Should the bulls maintain control over the pair, we could see it aiming if not breaking the 1.3170 (R1) resistance line. Should the bears take over, we could see cable breaking the 1.3015 (S1) support line and aim for the 1.2820 (S2) support level.

EUR continued its retreat against the USD and the CHF yesterday, as market expectations for weak growth prospects within the Eurozone strengthened. The weakening of the common currency is characteristic as the market starts to position itself ahead of the release of the GDP growth rates. Worries seem to be focused on the extensive forecasted slowdown of the German economy, which is considered the economic powerhouse for the trading block, yet also extent to other economies of the area such as France and Italy. Analysts note that market sentiment worsened after the release of manufacturing data, increasing expectations for ECB policy to remain accommodative. Should the results of today’s readings intensify worries we could see the EUR weakening further. On the flip side should the readings outperform market expectations we could see the market’s reaction providing an asymmetrical strengthening of the common currency. EUR/USD continued to drop yesterday, hitting the lowest level since April 2017, and testing the 1.0835 (S1) support line. We maintain our bearish outlook for the pair as it the downward trendline incepted since the 31st of January remains intact. Also please note that the RSI indicator in the 4 hour chart remains under the reading of 30, confirming the bear’s dominance. If the pair remains under the selling interest of the market, we could see it breaking the 1.0835 (S1) support line, aiming for the 1.0770 (S2) support level. On the other hand, should the pair’s long positions be favoured by the market we could see the pair aiming if not breaking the 1.0885 (R1) resistance line.

During the European session, we get from Germany, the Eurozone and the Czech Republic the preliminary GDP rates for Q4, while we also get the Czech CPI rate for January. In the American session from the US we get the retail sales and the industrial production growth rates for January, as well as the Uni. of Michigan consumer sentiment for February and the Baker Hughes oil rig count. In Monday’s Asian session, we get Japan’s GDP rate for Q4. As for speakers BoJ’s Amamiya and Cleveland Fed Mester speak 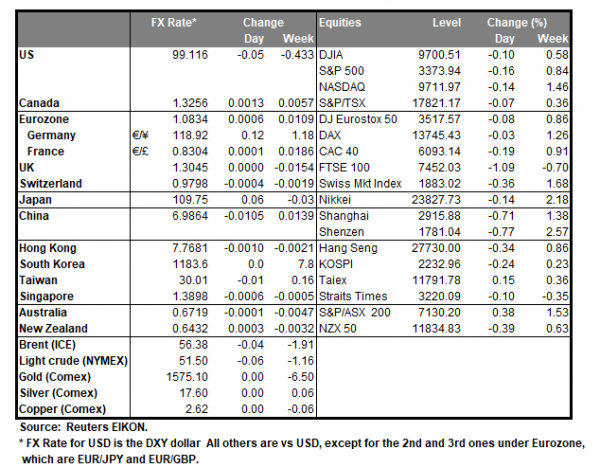