Investors had plenty of information (data and otherwise) to parse through this week. On the data front, the NFIB survey indicated that American small businesses entered 2020 on a solid footing. The confidence measure was up 1.6 points in January to 104.3 – a level that’s within the top 10% of historical readings. Under the hood, the most striking improvement was in sales volume expectations, which shot up 7 points to 23%. Interestingly, this came alongside a mild pullback in expectations about an ‘improvement in the economy’. This suggests that the improved sales view may be partially linked to the signing of the Phase One trade deal, with China’s pledge to boost imports from the U.S. having the potential to benefit small firms too, despite their heavier domestic tilt.

With a shortage of skilled workers and quality of labor concerns top of mind, small businesses continued to boost worker compensation in January, while signaling that they will continue to do so over the coming months as well. More wages pressures should put further upward pressure on inflation. The January CPI report appears to corroborate this narrative. Headline CPI ticked higher to 2.5% y/y in January, while the core measure held steady at 2.3% y/y (Chart 1). Core CPI inflation of just above 2% implies that core PCE inflation (currently at 1.6% y/y) should also trek higher, bringing the Fed’s preferred inflation gauge closer to target. This should give the Fed reassurance as they wait and assess the impact of past rate cuts and the risks to global economic growth from the new coronavirus (Covid-19) outbreak.

Retail sales data out this morning was less upbeat than expected. The headline was up 0.3% m/m, bang on market expectations. However, the control group, which excludes some of the most volatile categories, was flat in January, while the December gain was revised down to 0.2% from 0.5%. Despite a soft entry into the new year, and the added near-term headwind from reduced tourism as a result of the spread of the Covid-19 virus, we still expect consumption to advance at a decent clip this year. This view is underpinned by strong consumer fundamentals, including upbeat consumer confidence and still-sturdy job and income growth. A weakening trend in the (lagged) job openings data, however, raises some questions about the future pace of job gains. As of December, the pullback in job openings had become broad-based, both across regions and segments. A closer look at some of the details, however, paints a less concerning picture. The quits rate, for instance, remains elevated, which suggests that workers are still feeling confident enough to jump ship and follow better opportunities (Chart 2). As such, rather than signaling an impending downturn, the slowdown appears to be more consistent with easing employer demand and expectations of a more moderate pace of job growth going forward.

All in all, while this week’s data can be best described as a mixed bouquet (or bag), the U.S. economy appears to remain on decent footing – a view shared by Fed Chair Powell in his testimony to Congress this week. Still, the Covid-19 outbreak remains a major wildcard and bears careful watching. 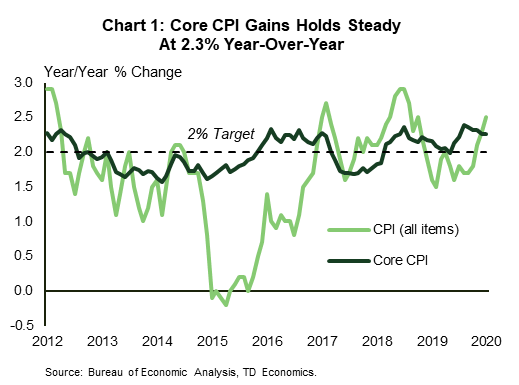 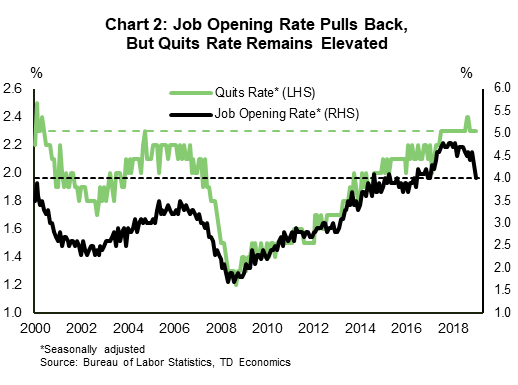 Canada – Another Week, Another Distortion

Market moves were generally positive this week. The S&P/TSX Composite index appears set to end the week higher despite very different tones from trading session to trading session. No surprise that it was seemingly Coronavirus-related developments that drove sentiment. Markets appear optimistic that the outbreak will have a contained impact. It wasn’t just equities – commodities have been reflecting a less optimistic view of growth implications from the Covid-2019 outbreak (see our report), but even this showed some slight signs of abatement this week. While still well shy of recent levels, the benchmark U.S. oil contract has moved steadily higher on the week, breaking above US$52 per barrel at the time of writing.

Away from markets, we got only a few economic signals. This morning brought Statistics Canada’s new vehicle sales report for December, which continued the negative trend of the past few years. Sales were down 3.5% year-on-year. This sector has been challenged for some time – unit sales have been down year-on-year for two years now, dropping in 21 of the 24 past months (Chart 1 – early data suggests a better January performance). As TD Economics has noted, auto sales are likely to remain challenged in the near-term as demand appears to be sated. Indeed, auto sales are just one part of the broader weakness in consumer spending, where volumes are trending below population growth – as clear a mark of a challenged backdrop as one could ask for.

It is not all dour news however, as there are signs that at least one of the headwinds to consumer spending may dissipate as the year progresses. To start with, new housing activity remains healthy. Home starts data for January revealed a still-solid trend (Chart 2). However, it is taking longer to get these units to market, thanks to the trend towards increased multi-unit construction. The under construction ‘pipeline’ remained near all-time highs in December. Regardless, the weakness at the start of last year is now behind us, and construction activity should be an important part of the overall economic growth outlook this year.

The supply of new units is unquestionably needed. Key resale markets across the country remained very tight in January. Despite a surprisingly strong drop in sales activity last month (distorted by unusual weather), many markets are drum-tight. Nationally, there are only about four months’ worth of inventory available for sale – a level last seen in the heady days of early-2017. The sales-to-listing ratio in Montreal, an eye-popping 94%, cannot go unmentioned. Other markets may not be so stratospheric, but many, including Ontario (69%) and B.C. (67% in December – a non-weather distorted reading) remain firmly above the 60% threshold that defines seller’s territory.

Where does this leave us? Solid demand fundamentals and only modest supply is a recipe for price gains. As our latest housing market report notes, this combination is set to send average prices up at a near-double digit pace this year – the kind of performance we last saw in 2017, before a string of macroprudential measures cooled things down temporarily. It is a two-edged sword: these kinds of gains will erode affordability, but will help support consumption, providing some relief to that sector as the year goes on. 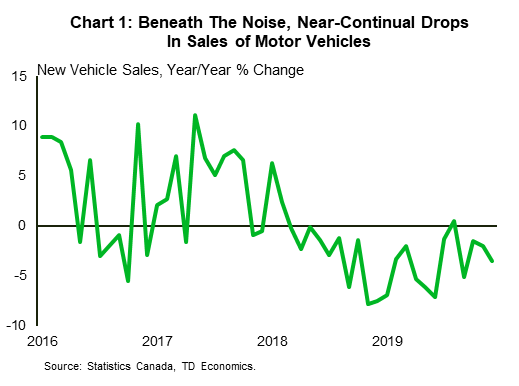 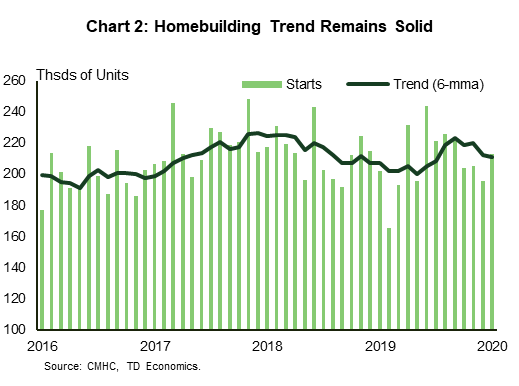 Manufacturing sales are forecast to rise by 0.2% m/m in December for their first increase since August. Merchandise exports saw a large rebound in December but gains were led by crude oil and minerals, resulting in a more subdued performance for manufactured goods. Motor vehicle shipments are expected to weigh on the headline print owing to the final wind-down of GM’s Oshawa facility and muted production south of the border, however, a rebound in primary metals will help offset weakness elsewhere after railway strikes contributed to a 0.9pp drag on manufacturing shipments for November. Real manufacturing sales should outperform the nominal print owing to lower factory prices, which will provide a source of strength for industry-level GDP in December. 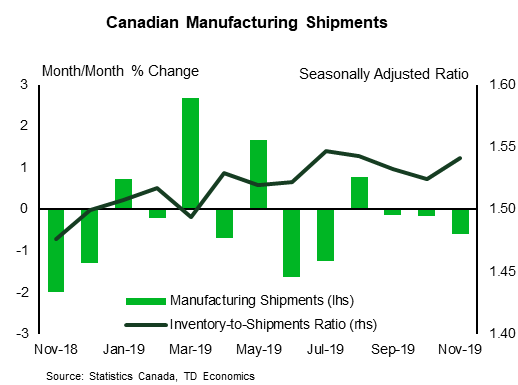 TD looks for headline CPI inflation to firm to 2.4% y/y in January, reflecting a 0.3% increase on the month. Energy prices will provide a key contribution on both a monthly and year-ago basis, with the latter helped by base-effects from a collapse in energy prices through 2018Q4. This will translate into a 11% y/y rise for gasoline, implying a 0.1pp increase in the year-ago contribution from energy, while the introduction of carbon taxes for Alberta will provide a tailwind to prices in January. Food will provide another source of strength on higher agricultural prices along with higher shelter prices after a rebound in new home prices. Elsewhere, we anticipate a partial unwind of December’s surge in airfares to weigh on the headline print; last January saw nearly a full unwind of the prior month’s 21% m/m surge, although ongoing capacity issues linked to the 737 Max may limit any relief to Canadian travelers. In contrast to the headline print, we look for further softening in core inflation measures led by CPI-trim and CPI-median. 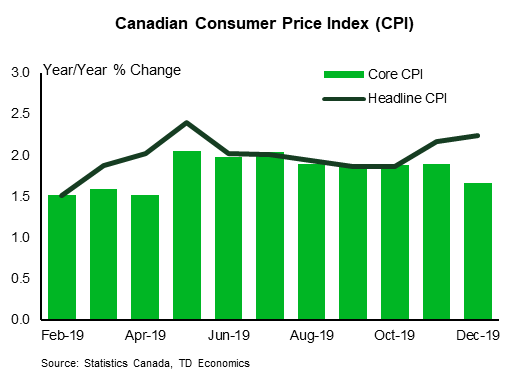 The Canadian consumer is poised to end 2019 on a bright note, with TD forecasting retail sales to rise by 0.5% m/m in December to provide some much-needed momentum heading into 2020. After lending a significant tailwind to November sales, we look for motor vehicles to exert a modest drag, leaving a forecasted 0.7% increase in ex-auto sales to drive the headline print. Ex-auto sales rose for the first time in five months during November, and a broad increase in consumer goods imports bodes well for consumption going forward. Real retail sales should post more modest gains owing to higher consumer goods prices, which will leave sales little change on a year-ago basis, although any positive contribution to industry-level GDP will be welcome after the muted performance through the second half of 2019. 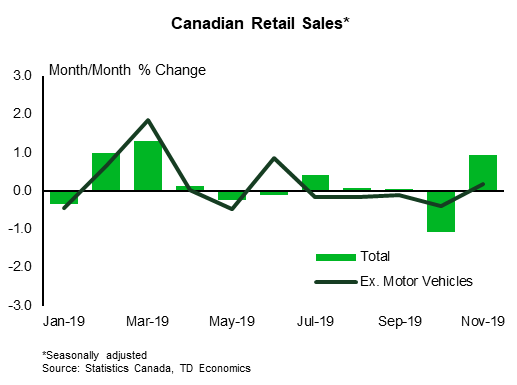