Canada will report GDP numbers for the fourth quarter on Friday (13:30 GMT) when trade tensions and industrial strikes are expected to have ground growth to a near halt. With economic conditions not likely to have improved in the first quarter, the data will be watched carefully by policymakers at the Bank of Canada, who meet next week. In the meantime, the Canadian dollar has stumbled near 4-month lows versus its US counterpart, weighed by weaker oil prices.

Gross domestic product (GDP) is projected to have expanded by 0.3% on an annualized basis in the final three months of 2019, slowing substantially from the second quarter’s 3.5% rate and the first quarter’s 1.3% print. If confirmed, this would mark the weakest growth in three and a half years. 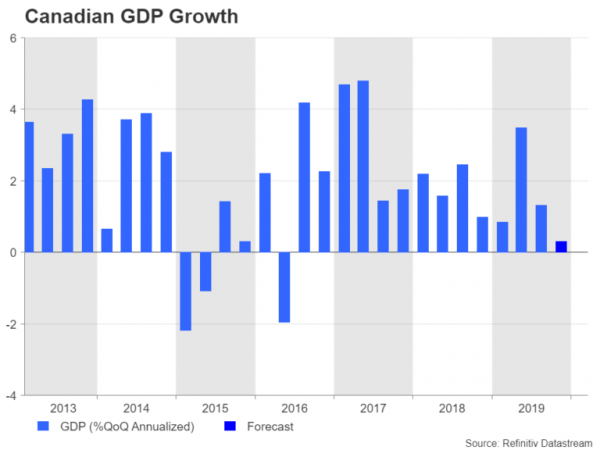 Although Canada’s economy is not heavily reliant on China, escalating trade frictions nevertheless weighed on exports in Q3 and could again drag on growth in the December quarter. Strike action in the railway industry and at General Motors’ Canadian operations are also expected to have constrained industrial activity, denting overall growth. However, exports jumped in December and the end-of-year rally in oil prices probably boosted growth as well. Hence, an upside surprise in GDP figures should not be discounted.

But with a major new headwind emerging in 2020, a beat in the Q4 GDP estimate is likely to do little in scaling back expectations of a rate cut by the Bank of Canada in the coming months. The outbreak of the coronavirus in China is now spreading rapidly to other countries just as Chinese authorities appear to be having some success in containing the epidemic in their own backyard. There is a growing risk that the virus could get out of control as some countries seem unprepared to deal with an outbreak.

This can only translate to a much more severe and longer-lasting fallout of the outbreak on the global economy than originally anticipated, meaning no country will be immune from the virus. Market expectations of rate cuts by global central banks have been steadily edging higher as the virus has shown no sign of slowing and the BoC has been no exception.

Data may not be game changer for BoC

The BoC has kept its overnight rate at 1.75% for more than a year now but during that period, it has flip-flopped between a hawkish and dovish bias. Lately, policymakers have been a bit more consistent in sounding out a neutral tone. That could change, however, if contagion fears intensify and the incoming data start to reveal a notable impact on the economy from the virus epidemic.

In the immediate term, if the GDP numbers are more or less in line with the forecasts, they are not anticipated to be a game changer for the BoC, which is due to hold its next policy meeting on March 4. With most measures of inflation running slightly above the Bank’s 2% target, it would take a really big miss in the Q4 growth figures for policymakers to adopt an easing bias as early as the March meeting and to attract significant moves in the Canadian dollar.

The loonie is currently trading near 4-month lows versus the US dollar and could resume its slide if the GDP report is poor. Dollar/loonie could aim for the May 2019 top of 1.3564 from revived upside momentum, though it would first have to overcome hurdles at 1.3345 and 1.3430 – both strong resistance areas in the past.

However, if the data shows the Canadian economy grew more strongly than expected at the end of Q4, the loonie will likely receive a mild boost at best as investors would continue to bet that a rate cut later this year is unavoidable. Dollar/loonie would potentially retreat towards its 200-day moving average near the 1.32 level in such a scenario.