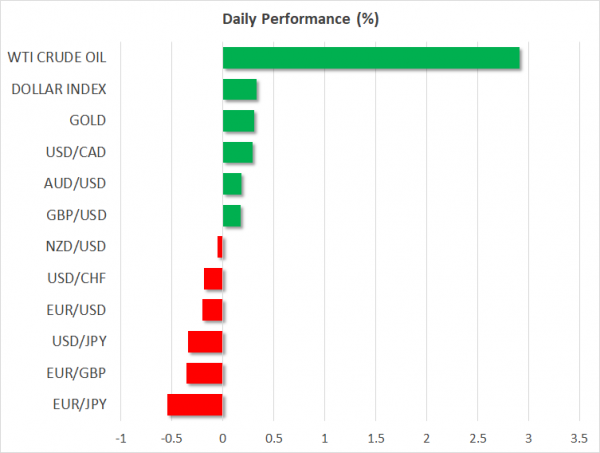 The Reserve Bank of Australia became the first major central bank to cut interest rates on Tuesday in response to the worsening outbreak of the coronavirus. Mounting fears about the economic fallout from the epidemic led global stocks to record their worst losses since the 2008 financial crisis last week.

Investors have poured into safe assets such as gold and government bonds, as well as haven currencies like the yen and Swiss franc ever since it became clear that the virus outbreak will likely have a more devastating impact on the global economy than initially expected. With the virus now spreading rapidly outside of China and many countries anticipating a big jump in the number of infections in the coming weeks, there is widespread fear that the world is on the cusp of a new economic crisis.

The growing panic in financial markets has certainly caught the attention of central bankers, with the heads of the Federal Reserve, the European Central Bank and the Bank of Japan all reassuring markets in recent days that they stand ready to take necessary measures to support their economies.

The RBA has gone one step further and unexpectedly cut its cash rate by 25 basis points to a new record low of 0.50%. Investors now think there’s a strong chance the Fed will cut by 50 bps and the ECB by 10 bps at their next meetings in March.

Stocks attempt a comeback, all eyes on G7

Shares on Wall Street surged on Monday, with the Dow Jones (+5.1%) posting its largest gain since 2009, as traders bet that governments and central banks will step in to provide economic support amid the ongoing virus outbreak. European equities were also bullish, jumping by more than 2% at the open. However, Asian stocks lost some steam as doubts started to emerge about the size of any potential stimulus.

The finance ministers and central bank chiefs of the G7 countries are reportedly scheduled to hold a conference call at 12:00 GMT to discuss possible actions to soften the rising negative impact of the coronavirus on businesses. However, a Reuters story that the draft statement does not contain specific pledges of either fiscal or monetary measures dampened sentiment slightly.

If the G7 statement does not live up to expectations, there’s a real risk stocks may go into tailspin again. China’s manufacturing PMIs released over the weekend and on Monday confirmed the devastating impact the lockdowns had on factory activity in February and without any fiscal and monetary support to offset the disruptions from the virus, the already gloomy forecasts for growth may have to be revised even lower.

The caution about how much world leaders and central bankers can do to deal with the crisis was more evident in currency markets, with the yen advancing broadly against its peers and pushing the US dollar back towards the 108 level.

The dollar index inched up, however, as the euro took a breather from its recent strong rally, having rebounded by about 3% from the near 3-year lows brushed on February 20. The pound was steadier around $1.2775 as UK and EU negotiators prepare to begin trade talks, while the Australian dollar firmed to around $0.6550, getting a lift from the improved market mood, despite expectations that the RBA will have to make more rate cuts in the coming months.

In commodities, the simultaneous risk-on and cautious sentiment was also demonstrated by both gold and oil prices heading higher.

Looking ahead to the rest of the day, the focus will likely move to US politics as Democratic candidates for the 2020 presidential race will battle it out to secure the most delegates on what is considered to be the biggest of the primaries and could decide who gets to stand against President Trump in November. If current frontrunner Bernie Sanders – progressive candidate – continues to lose ground to the more moderate Joe Biden, who received a major boost over the weekend, US stocks could have more to cheer as Biden is less likely to be of a threat to corporate America than Sanders. 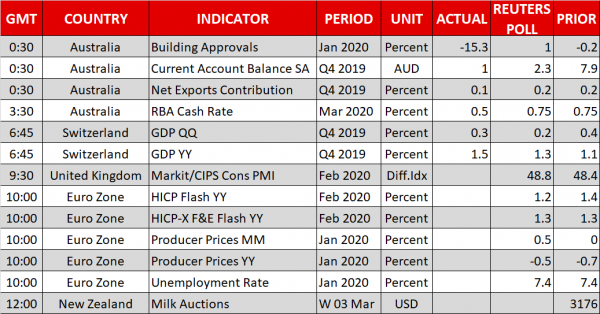