Coronavirus fears continued to lead to wild gyrations in financial markets this week. On Thursday, the Dow suffered its biggest one-day decline since 1987. This has been followed by a solid rebound as of Friday morning. Beyond market movements, the week was punctuated by announcements from policymakers attempting to stanch the economic bleeding.

Leading the charge, on Tuesday, the Bank of England and the UK Treasury announced a coordinated emergency policy intervention. The Bank of England cut the Bank Rate by 50 basis points, taking it to just 0.25%. It also cut its counter-cyclical capital buffer to 0% and announced a new Term Funding Scheme for small and medium sized businesses (SMEs). Together these measures should help ensure that credit to the real economy does not freeze up even as economic activity likely does (at least temporarily).

For their part, the UK Treasury announced emergency funding of £12 billion to support for public services, households and businesses. Measures include statutory sick pay and income credits to self-employed individuals and grants to businesses impacted by the slowdown. These emergency measures come on top of £18 billion in additional spending announced in the UK budget on the same day. Together, the spending announcements amount to over 1.5% of UK GDP and should provide a lift to economic growth as the virus subsides.

Elsewhere in Europe, the ECB’s policy announcement on Wednesday underwhelmed markets that had been expecting a cut in rates. Still, it used other tools at its disposal including lowering the rate on “targeted long-term refinancing operations” (TLTROs) effectively to 0%, and increasing its QE program by €120 billion, with purchases aimed at private-sector assets. These measures were also aimed at ensuring credit to SMEs remains available..

On the fiscal front in Europe, the German government pledged unlimited cash to businesses hit by the virus, and hinted that it would step back from its self-imposed ban on new borrowing and announce additional spending as required. The German state bank is mandated to lend up to €550 billion. In characterizing the announcement, the German finance minister said “this is the bazooka.”

Stateside, the New York Federal Reserve announced it will increase its short-term repo lending $1.5 trillion over the next few days. The action is aimed at ensuring adequate liquidity in overnight funding markets.

On the fiscal front, there is speculation of a major package, but few details just yet. Trump’s speech on Wednesday announced some small measures including providing SBA loans to businesses impacted by the virus, and deferring tax payments without interest or penalties. He has also called for a payroll tax cut, but so far has not had Congress agree. House Democrats released an economic relief plan that would pay for free testing, expand paid sick days and unemployment benefits and food security programs. It has yet to be costed, but is expected to total in the billions. 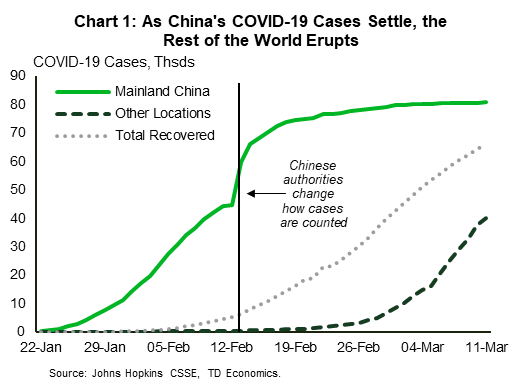 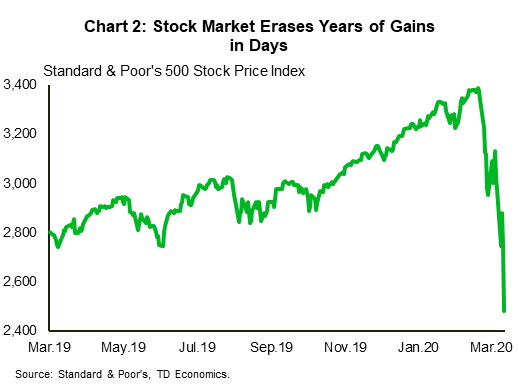 Canada – One For The Record Books

It was a brutal week in markets, particularly for Canadian investors. Thursday saw the TSX Composite index drop by the most since the World War II era, shedding more than 12% of its value. Markets worldwide continued to process the implications of the novel Coronavirus (COVID-19), sending valuations lower. This week was a particularly ‘wild’ one: Monday’s drop was also one for the record-books (Chart 1). Canadian markets have been particularly hard hit as COVID-19 concerns come on top of a significant drop in oil prices that have hammered the share prices of large swathe of TSX listed firms. This morning saw markets open higher, recovering about a third of the prior day’s loss in Canada’s case, but given this week’s developments, extrapolating this to the close seems foolhardy.

Before the week started, global commodity prices were slammed as Saudi Arabia announced a significant production ramp-up after OPEC+ talks fell apart (see our analysis here). This shock-and-awe approach, which comes as COVID-19 is hammering demand, appears to have worked. Benchmark oil prices fell markedly – the U.S. WTI price fell 25% to just $31 per barrel at Monday’s close, and as of yesterday, sat at roughly half their start-of-year level (Chart 2). With neither Saudi Arabia nor Russia showing any signs of backing down, we expect low oil prices to stick around for a while, causing even more pain for oil-producing regions of Canada.

This one-two punch to the Canadian economy has already driven a half-point cut from the Bank of Canada, and there is likely more to come. The Bank of Canada has also joined the Federal Reserve in undertaking operations to ensure continued market functioning. TD Economics is currently in the process of updating our forecasts – the full numbers and discussion will be released March 19th. As it stands, a significant contraction in economic activity in the second quarter is likely given major league sports and other event cancellations, and the economic implications of ‘social distancing’ that is necessary to curb the spread of the virus.

Monetary easing is a blunt tool however – more effective in helping those most impacted are targeted fiscal policies. At the federal level, borrowing costs are extremely low (in fact, negative in real terms through to the 30-year tenor), and the current debt burden is completely manageable by any reasonable standard. This means that the government has ample fiscal space to respond to the current economic threat. Now, Canadians still expect the government to be responsible stewards of the future stream of tax revenues, but there is clear scope for a response to the shocks hitting the Canadian economy. We hope for measures that can be rolled out quickly, targeted at those most likely to be impacted by economic disruptions, such as workers who may not qualify for EI, small businesses, and the like, helping to smooth incomes through the shock. There have been indications from Deputy PM Freeland that such measures may come ahead of the formal budget process (seemingly now postponed given the closure of Parliament until April 20th). Given the fast-moving nature of the shock and risks to longer-term consumer and business sentiment, the sooner these offsets can be put in place, the better. 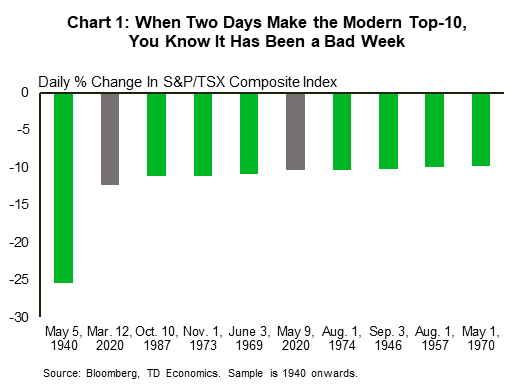 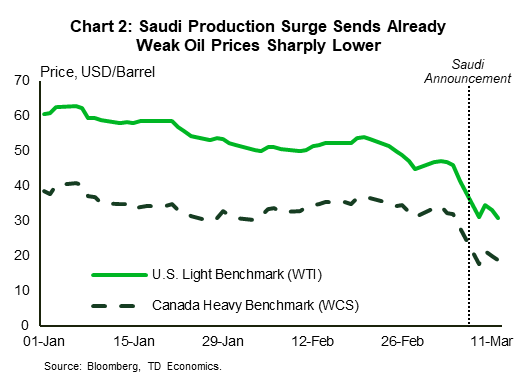 Retail sales look poised to weaken significantly, but weakness in February was probably limited by worried consumers stocking up on supplies. We forecast headline sales growth to be flat month-on-month, with the control group up only 0.2% m/m (vs 0.0% in Jan). At 101.0, the February reading for the Michigan sentiment index was high, but the index dropped to 95.9 in early March. More weakening looks likely. Similarly, the job market looks poised to weaken after being strong through February. 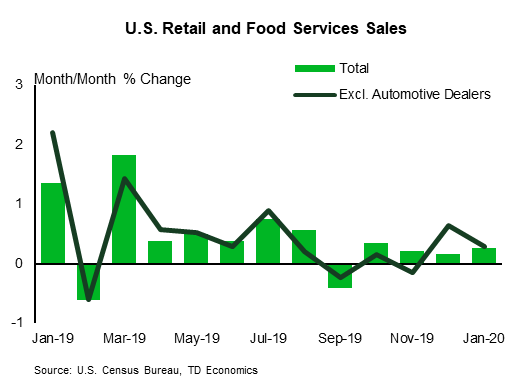 The Fed has already announced an inter-meeting rate cut of 50 bps, stepped up repo operations dramatically and effectively re-started QE. Officials are clearly worried, as they should be. Nor do we think they are finished. We expect the Fed to cut the funds rate by another 50 bps at the March meeting. They will also likely announce additional measures similar to those recently announced by the Bank of England and ECB to ensure credit remains available. This is likely to include additional liquidity measures and potentially full-fledged QE again amidst rising recession risks. Economic activity is likely to contract in Q2, and the rebound will depend on containment measures and the scope of the fiscal policy response. 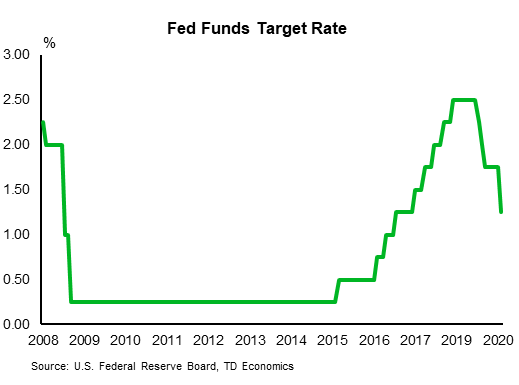 Canadian manufacturers will begin 2020 on a rough note, with total shipments forecast to decline 0.8% for their seventh contraction in the last eight months. This comes on the heels of a downbeat merchandise trade report, which showed exports lower for 9 of 11 categories, despite the continued resilience in manufacturing PMI. Energy products will exert a nominal headwind owing to lower gasoline prices during the month along with softer exports for refined products, while motor vehicle shipments will be weighed down by another decline in monthly auto production. Real manufacturing sales should underperform the nominal decline; producer prices saw little change in January, but higher export prices tilt the balance of risks towards a larger pullback in real manufacturing shipments. 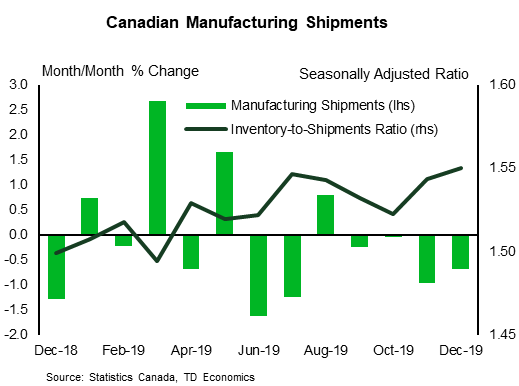 TD looks for headline CPI to recede to 2.1% y/y in February after printing at a two-year high of 2.4% last month. This is consistent with a 0.4% increase on the month, driven by seasonal factors in apparel, recreation, and travel services. While the latter could show early signs of the impact from COVID-19, we think these will be felt more broadly in March as global cases (outside China) were still low through the end of February, and polling data that suggests 72% of Canadians were planning to go ahead with international travel in early March. Elsewhere, we should also see a moderate decline in gasoline and other energy products ahead of their more recent plunge, although energy should still contribute ~0.3pp to the headline print on a year-ago basis. Shelter costs should also weigh on the monthly increase owing to a moderation in new home prices that will weigh on homeowner replacement costs, although we’ll have to wait until March to see a pullback in mortgage interest costs.Looking past the headline print, we see downside risks to measures of core CPI, the average of which has fallen by 0.1pp over the last two months. CPI-trim (currently 2.1%) is most likely to fall further owing to base-effects and a muted headline print after adjusting for seasonality. 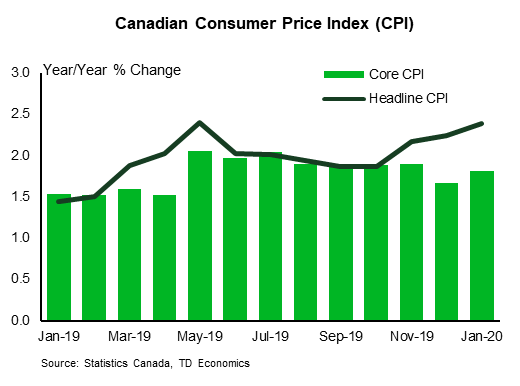 TD looks for retail sales to rise by 0.3% m/m in January on a combination of stronger auto sales and a 0.2% pickup in the ex-auto index. The latter is a moderation following two consecutive months of 0.5% growth, as we expect lower sales at gasoline stations to weigh on the ex-auto measure. Elsewhere, a sharp pullback in consumer goods imports reduces the scope for broader strength in ex-auto sales. Auto sales should provide a muted tailwind to the headline print on stronger preliminary sales and elevated consumer confidence. However, most of the increase can be attributed to higher prices, leaving real retail sales largely unchanged. 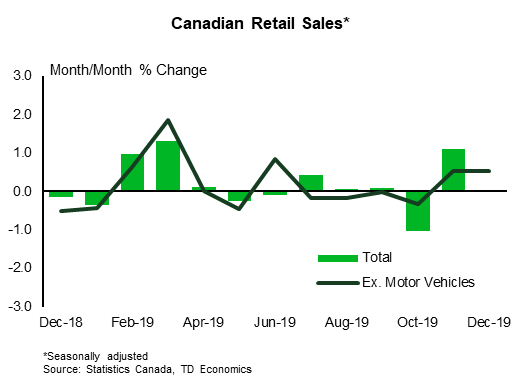