The week past has seen eye-popping layoff numbers in both Canada and the US with reports that almost a million jobless claims were filed last week alone in Canada, and 3.3 million in the US. These were unprecedented increases, and set up for similarly unprecedented jumps in unemployment in both countries. In the United States, we expect jobless claims ramped up even further, to 4 million this week. The spike in layoffs has for the most part occurred after the reference week for the monthly payroll survey so will show up more in the April than March employment numbers. But we are still looking for the first drop in US payroll employment since 2010 to be reported for March next week. The Canadian survey period was a week later than the US in March this year so the recent increase in layoffs will likely show up more quickly in the Canadian data. We could already see the unemployment rate spike to 10% (or more) in March in Canada, with likely further deterioration coming in April.

That near-term economic growth and labour market reports are going to look ugly is already clear. That’s why the Bank of Canada responded once again today with lower interest rates and a QE program. The larger question is how long this crisis lasts. Based on the experience of other countries, a significant sustained flattening in growth of total confirmed COVID-19 cases will be needed before current social-distancing measures can be eased. To-date, the South Korean model of controlling the spread has emerged as a sort of gold-standard – Korea was hit early with the outbreak, but a quick aggressive response slowed the spread dramatically. The number of confirmed virus cases has been increasing dramatically in Canada as elsewhere – yet the trajectory in this country is as yet not dramatically different than the South Korean experience, suggesting there is yet room to get back on a more controllable outbreak trajectory.

In the mean-time, normally high-profile, but in the present environment woefully out-dated, economic releases will fall by the wayside as largely irrelevant. That includes next week’s January GDP report for Canada. We expect 2020 actually started out on a slightly firmer economic footing with an expected tick up in manufacturing output and wholesale sales pointing to a 0.2% increase in overall output in the month to build on a 0.3% December increase. The reality is that’s not going to last. The January and February GDP changes will look like rounding errors compared to a pullback in March that will almost certainly be multiples of the largest prior monthly decline on record. 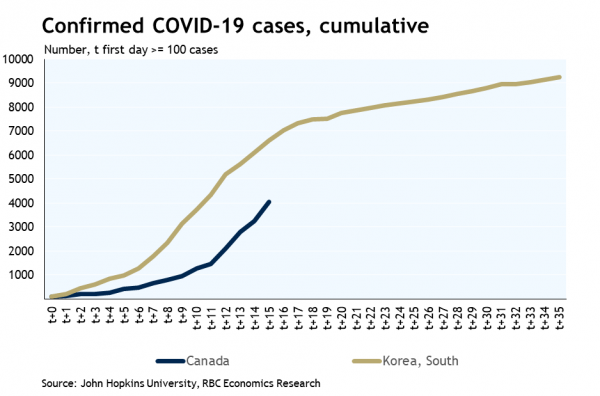